A private, for-profit university that has been on probation for months over its nursing program is now the target of a class action complaint that was filed by a former student. FOX 10 Investigative Reporter Justin Lum reports.

PHOENIX - Aspen University's Phoenix program remains under the microscope of the state nursing board as the private, for-profit school has been on probation for several months.

Now, a former student is suing.

A source close to the case says they’ve never seen a situation like this, and a spokesperson with the U.S. Department of Education says it's watching oversight actions taken by the Arizona State Board of Nursing linked to Aspen University and what may impact its federal student aid eligibility.

Kristen Stewart worked as a veterinary nurse for 20 years, but as the COVID-19 pandemic began, she decided to transition to human medicine and applied to Aspen University’s Bachelor of Science in Nursing program.

"The benefits of Aspen was that there's a nights and weekends program. I'm a single mom and I'm working full time. That's really important because it works for my schedule. The other benefit to it was cost," she said.

Stewart completed her prerequisites and was set to begin core nursing classes on Feb. 15 of this year, but that never happened for incoming students at both Phoenix campuses.

"There was a lot of emotions. Obviously upset. Some anger," Stewart said.

Arizona’s Board of Nursing had already launched an investigation into Aspen University by this time.

Aspen University’s glaring 2021 first-time pass rate of 58% on the NCLEX, the national exam needed to become a nurse, was far below the 80% mark required by Arizona law.

Admissions into the nursing program stopped as the board issued a notice of charges.

"It was very, very disheartening to find out … about a week before class was supposed to start, then we weren't moving forward," Stewart said.

The lawsuit says Aspen made false promises and misrepresentations of its program and hid deficiencies from students, like Stewart.

Before the three-year probation, there were about 700 students who either completed pre-rec courses, were still taking them, or had just enrolled.

Stewart eventually enrolled in another school, but says not all of her credits from Aspen transferred with her.

"So I have had to retake some courses and you know, put in some extra time redoing things that you know, I’ve already passed," Stewart said.

Meanwhile, her federal financial aid is being exhausted as she spent around $15,000 in loans on tuition at Aspen.

"Essentially, my senior year, I will be out of funding," she explained.

Stewart is suing Aspen on behalf of others in similar situations, Arizonans who enrolled in the pre-nursing program and paid tuition.

It’s yet to be determined the exact size of the class.

Aspen’s consent agreement with the nursing board says the program must achieve an average of 80% on the NCLEX in 2022, but so far, it hasn't.

"As of today, the year-to-date pass rate is 69.4%. Ninety-three out of the 134 students who have passed," said Dr. David Hrabe, education program administrator of the Arizona State Board of Nursing, at a July 29 board meeting.

He's investigating Aspen University and describes a bleak situation for the program.

"For Aspen to achieve 80% by year’s end of 2022 which is consistent with their consent agreement, students would need to be testing at 88% from now on in terms of first-time pass rate. With the adjusted numbers, that’s now 89%," Hrabe said.

Updated numbers in August show Aspen’s first-time pass rate dropped to 67% since the first quarter of the year. 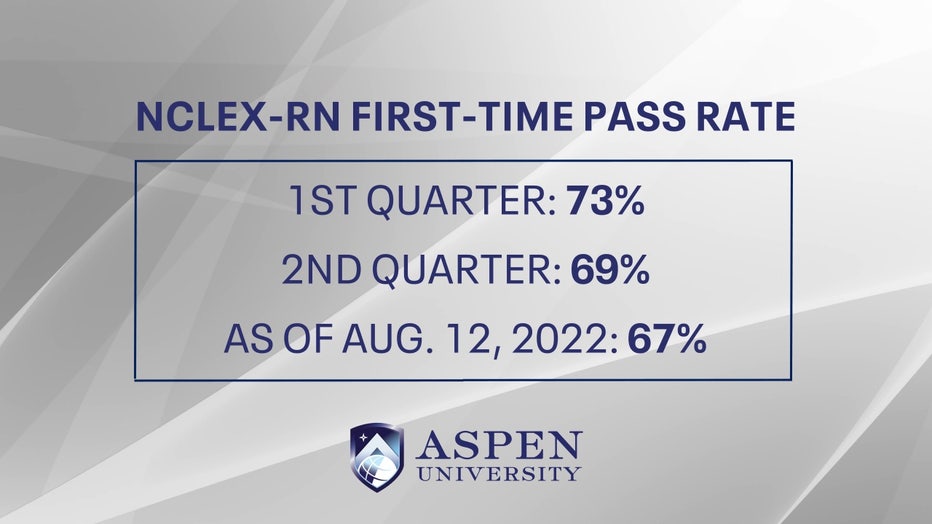 If the program fails to meet the mark, admissions could be suspended indefinitely and the board can start the process of Aspen fulfilling its obligations to existing students within two years max.

" … contract seen from a student in Georgia. There’s some information that we’re pursuing around that particular situation," Hrabe said.

Aspen University’s attorney Geoffrey Sturr responded, saying, "Aspen will cooperate and continue to cooperate and provide information in response to the RQ that’s been received, and the facts are very much in dispute, and we just ask the board to keep an open mind until it receives a complete, investigative report."

Stewart says she’s not giving up on her dream of being a nurse.

When asked if she feels betrayed by the university, she said, "Yeah … I wouldn't be in this situation if it had been done properly."

Aspen is accredited by the Distance Education Accrediting Commission (DEAC). The commission says it’s also aware of the program’s issues and is working with Arizona's Board of Nursing and private postsecondary education board to monitor the situation.

The commission released a statement saying, "DEAC is aware of the issues regarding the BSN pre-nursing program and has been working with Arizona's Department of Private Post-Secondary Schools and the Arizona Board of Nursing to monitor the situation and to ensure that the interests of students continue to be the priority."

The private, for-profit university was facing serious allegations regarding how students are taught and tested, as well as their failure rate on the national exam that determines if it's safe for graduates to practice nursing. FOX 10's Justin Lum reports.

Aspen University investigation: School officials appear in front of school board once again

Online school Aspen University is facing serious allegations regarding how students are taught and tested, as well as their failure rate on the national exam that determines if its safe for graduates to practice nursing. The troubles AU is facing will impact students who hope to have a career in nursing. FOX 10's Justin Lum reports.

Students with a private, for-profit online university are sharing their frustration, as Arizona officials are looking into Aspen University, and calling for an outside consultant to straighten out the school. FOX 10's Justin Lum reports.