With the clock ticking on America’s debt limit, President Joe Biden called a meeting with CEOs of major businesses to stress the importance of raising the debt ceiling.

Biden opened the meeting with heads of businesses like AARP, BOA, Citi, Deloitte, Intel, JP Morgan, NASDAQ, National Association of Realtors by pleading with Republicans not to block the Democrats from raising the debt ceiling.

He said the process used to occur regularly, no matter which party controlled the government. But it has become another partisan battleground in recent years.

"It doesn't have to be this way," Biden stressed. "My Republican friends need to stop playing Russian roulette with the U.S. economy. If they don't want to do the job, just get out of the way. We'll take the heat. We'll do it. We will do it. Let the Democrats raise the debt limit without obstruction or further delays."

Congress avoided a partial government shut down last week when it funded federal programs in a stopgap bill. But experts say failing to raise the debt ceiling would prove far more disastrous than a shutdown could.

The U.S. government operates at a budget deficit, meaning it spends more money than it brings in through taxes. So, it borrows funds to make up the difference. A default would mean the government exceeded the statutory debt limit and is unable to pay some of its creditors. 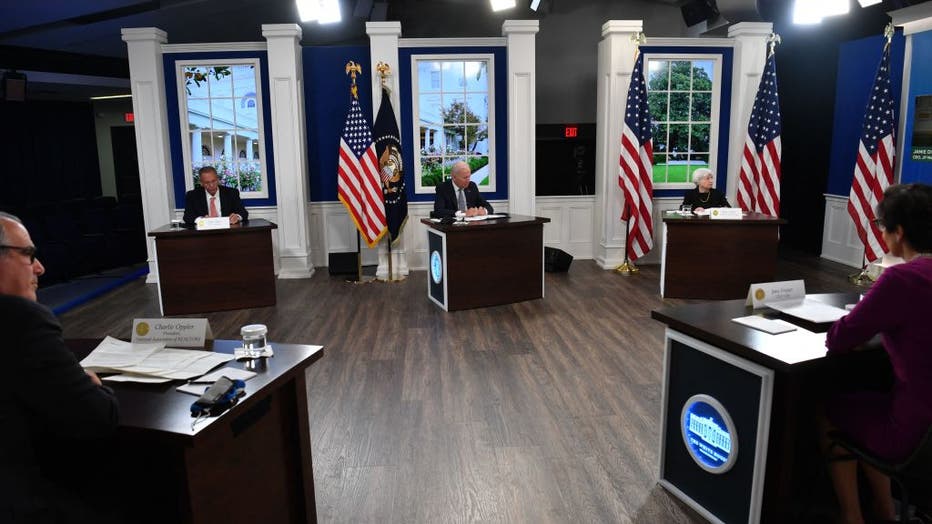 President Joe Biden (C) speaks during a meeting with business leaders and CEOs on the need to address the debt limit, on Oct. 6, 2021, in the South Auditorium of the White House in Washington, DC. (Photo by NICHOLAS KAMM/AFP via Getty Images)

The Treasury has marked Oct. 18 as the soft deadline in which it could run short of funds. Experts believe that would trigger a recession that devastates the global economy.

Biden said it would jeopardize the U.S. dollar as the world’s currency, raise interest rates for American home and car buyers, downgrade America’s credit rating, and threaten benefits offered through Social Security and to veterans.

Congress has the power to avoid that — specifically the Senate in this case, which is set to vote on the measure Wednesday. But what was once a routine duty neither party obstructed, has become increasingly partisan.

The House already passed a measure that would raise the debt ceiling. But Senate Republicans, following the orders of Minority Leader Mitch McConnell, R-Ky., have committed to blocking Democratic efforts to pass the bill.

Democrats have the simple majority needed to pass the measure, but they do not have the 60 votes required to end a filibuster.

The filibuster rule allows a minority party to block the majority party’s agenda if they lack the votes required to end the debate. Many Democrats, specifically more progressive members, have been calling for the filibuster to be abolished, though it still has defenders among moderates.

McConnell had previously tried to link the need to raise the debt ceiling with Biden’s lofty $3.5 trillion spending bill. But Biden shot that down, saying it’s to cover previous spending.

Now, McConnell is forcing Democrats to use a much slower process, which could take days, if not weeks. That would eat into their agenda, giving Republicans ample time to remind voters about the unpopular vote.

"The unified Democratic government had two and a half months to address the debt limit through reconciliation. Instead, they drifted to the doorstep of yet another self-created Democrat crisis. Whether through miscalculation or a deliberate effort to bully their own members into wrecking the Senate, top Democrats have risked adding a default crisis to the inflation crisis, border crisis, and Afghanistan crisis they have already created," McConnell said in a statement released Wednesday.

Budget reconciliation allows bills to circumvent the filibuster with a simple majority. One way around that obstruction would be to change the filibuster rule. Biden, who had been slow to embrace doing away with the filibuster after Senate clashes on voting rights, indicated in off-the-cuff comments on Tuesday that Democrats are weighing a procedural change.

Dropping the filibuster would lower the threshold to end debate down to 50 votes. Vice President Kamala Harris would break any tie in the Senate, enabling Democratic policies to move forward. 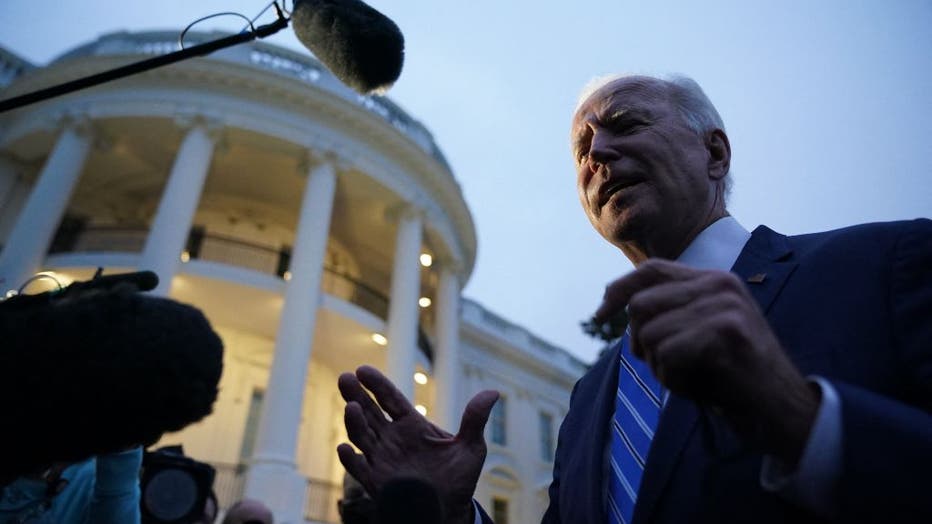 President Joe Biden speaks to reporters on the South Lawn upon return to the White House in Washington, D.C. on Oct 5, 2021. Biden returned to Washington after visiting Michigan. (Photo by MANDEL NGAN/AFP via Getty Images)

Even so, such a change would require unanimous Democratic support — which the party does not have. Sen. Joe Manchin, the West Virginia Democrat often at odds with progressives, has been a vocal defender of the filibuster since Democrats took control of the chamber.

At his weekly press conference, Senate Majority Leader Chuck Schumer, D-N.Y., did not embrace — or reject — the idea of changing the filibuster for this one specific issue.

Instead, Schumer simply repeated what he, Biden and others have said — that Republicans should "get out of the way" and allow Democrats to pass the measure that's already been approved and sent over from the House.

"The best way to get this done is for Republicans to just get out of the way," Schumer said. He said the burden to stand aside is on McConnell's shoulders.