President Joe Biden and Vice President Kamala Harris were among those who participated in the annual Memorial Day wreath-laying ceremony at Arlington National Cemetery's Tomb of the Unknown Solider on May 31, 2021.

ARLINGTON, Va. - President Joe Biden honored U.S. soldiers who paid the ultimate sacrifice by laying a wreath Monday at Arlington National Cemetery and calling on Americans to commemorate the fallen for the pursuit of democracy.

Biden was joined by first lady Jill Biden, Vice President Kamala Harris, Second Gentleman Douglas Emhoff, Defense Secretary Lloyd Austin and Joint Chiefs of Staff Chairman Gen. Mark Milley for the wreath-laying. The somber ceremony was held at the Virginia cemetery's Tomb of the Unknown Soldier, which is dedicated to the fallen U.S. service members whose remains have not been identified.

His face tight with emotion, Biden walked up to the wreath, cupping it in his hands in silent reflection, and then made the sign of the cross. Later, he called on Americans to commemorate their fallen heroes by remembering their fight for the nation's ideals.

"This nation was built on an idea," Biden said in an address at Arlington. "We were built on an idea, the idea of liberty and opportunity for all. We’ve never fully realized that aspiration of our founders, but every generation has opened the door a little wider."

He focused much of his speech on the importance of democracy, saying that it thrives when citizens can vote, when there is a free press and when there are equal rights for all.

"Generation after generation of American heroes are signed up to be part of the fight because they understand the truth that lives in every American heart: that liberation, opportunity, justice are far more likely to come to pass in a democracy than in an autocracy," Biden said.

The Bidens stopped by a row of gravestones after the ceremony, holding hands and speaking with a family whose relative died during World War II. 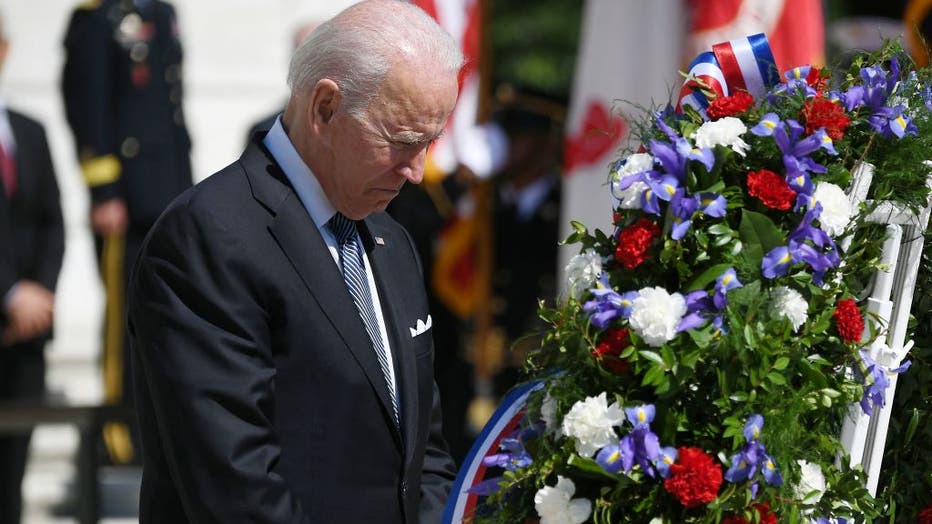 US President Joe Biden takes part in a wreath laying in front of Tomb of the Unknown Soldier at Arlington National Cemetery on Memorial Day in Arlington, Virginia on May 31, 2021. (Photo by MANDEL NGAN/AFP via Getty Images)

The long weekend has marked Biden’s first Memorial Day as commander in chief, which has taken on an added poignancy as he paid tribute to those lost while remembering his own late son Beau, a veteran who died of brain cancer six years ago to the day.

On Sunday, Biden made his annual appearance at the commemoration in New Castle, not far from his Wilmington, Delaware, home, where he addressed a crowd of Gold Star military families and other veterans.

"I can’t thank you enough for the continued service for the country," Biden said to the group of veterans and families of fallen service members at the War Memorial Plaza in the shadow of the Delaware Memorial Bridge. "I know how much the loss hurts."

The death of his son Beau from brain cancer at age 46 is ever-present for the elder Biden, with the loss defining so much of his worldview, dotting his speeches and stirring his empathy for others in pain.

Beau Biden served two terms as Delaware's attorney general before declaring a run for governor, and many saw in him the same aspirations that brought his father to the White House.

While speaking Friday at a Virginia air force base, the president recalled how Beau Biden also served in Delaware’s National Guard and, when sent to Iraq, received permission to wear a uniform emblazoned with a different last name so as not to receive special treatment.

That story was one of the many moments in which Biden’s son defined the Memorial Day weekend. After beginning with an emotional remembrance of his late son, Biden acknowledged the unheralded sacrifices made by the service members and their families.

"You are the very best of what America has to offer," Biden said then.

Monday’s wreath-laying ceremony at Arlington National Cemetery was one of two major annual remembrance ceremonies that occur throughout the year — the other happening on Veterans Day.

The cemetery, located across the Potomac River from Washington, D.C. in Arlington County, Virginia, is the final resting place of more than 400,000 veterans and their eligible dependents — some dating as far back as the Civil War.

RELATED: 'Band of brothers': Guards keep eternal watch over Tomb of the Unknowns for those who made ultimate sacrifice