If House Bill 2787 is approved, the parts of Arizona now occupied by Maricopa County will be split into a rump Maricopa County and three other new counties. FOX 10's Brian Webb reports.

PHOENIX - Maricopa County would be split into four smaller pieces under legislation advanced Wednesday, with the State House's Government and Elections Committee approving the measure in a 7-6 party-line vote on Feb. 16.

Here's what you should know about House Bill 2787.

What is the bill going to do?

The other three counties, if the bill passes, will be called Hohokam County, Mogollon County, and O'Odham County.

How will Maricopa County be split up? 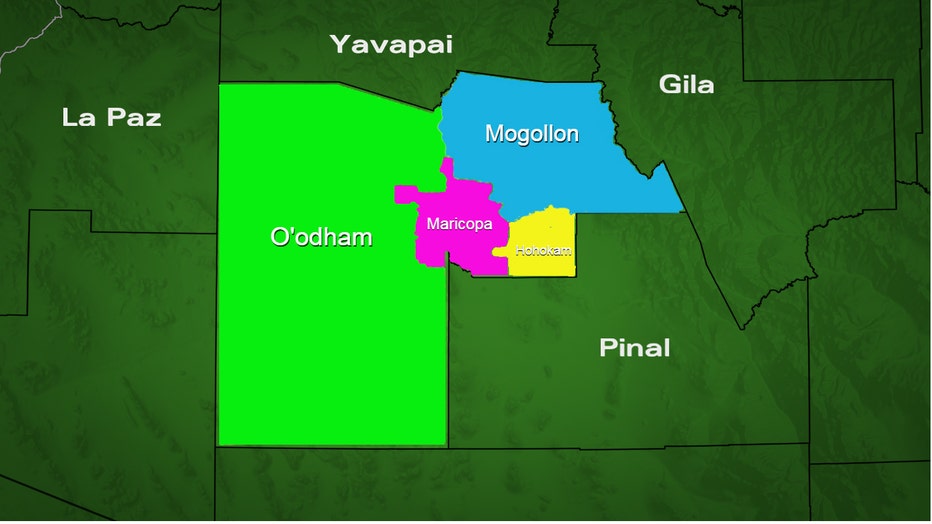 HR 2787 contains detailed descriptions of the borders of each of the four proposed counties.

What will happen if the bill is approved and signed by the Governor?

After a transition period, each would have its own county functions including a court system, elections department and public health agency, along with its own elected officials including a board of supervisors, county attorney, sheriff and recorder.

Maricopa County’s existing debts and assets would be divided proportionally.

Why are they trying to split up Maricopa County?

Rep. Jake Hoffman, the Queen Creek Republican who sponsored the bill, said with 65% of the Arizona’s population and more people than half the U.S. states, Maricopa County is becoming too big to be efficiently managed.

Maricopa County has just under 4.5 million people and is the fourth largest in the nation after Los Angeles County; Cook County, Illinois, which includes Chicago; and Harris County, Texas, which includes Houston.

Hoffman said his proposal would provide for a better local government and allow the four smaller counties to focus more on regional needs.

"If we don’t allow for the formation of new counties that are more reflective, more representative, more accountable to the people, we will be kicking ourselves in 30, 40, 50 years that we never did this," Hoffman said. "And it is much easier to do it now than it will be then."

Are there oppositions to the bill?

Democrats in the state Legislature suspect the legislation is really motivated by the Maricopa County Board of Supervisors’ refusal to go along with former President Donald Trump’s efforts to overturn the 2020 election results.

State Rep. Sarah Liguori, D-Phoenix, said the three new counties would lean toward Republicans while Democrats would be overwhelmingly concentrated in one district.

"This is about putting more chips on the roulette table so you can win your bet," said Rep. Lorenzo Sierra, an Avondale Democrat. "One of these three counties, I’m sure, would decertify this election in a heartbeat."

The Maricopa County Board of Supervisors is controlled 4-1 by Republicans, but the board enraged Trump and segments of the GOP for defending the integrity of the 2020 vote count, which the former president falsely claims was rigged.

Hoffman is one of the Legislature’s staunchest supporters of GOP bills to change election laws. He is also among 11 Republicans who would have voted for Trump in the Electoral College if he’d won Arizona. All 11 Trump electors signed a document falsely claiming to represent Arizona’s electoral votes.

Hoffman said it’s "pure conspiracy theory" and "laughable" to suggest his proposal is motivated by the election.

Have we created new counties before in Arizona?

Yes. Throughout history, new counties have been created in Arizona.

According to the book Arizona Territory, 1863-1912; a political history by Jay J. Wagoner, Apache, Cococino, and Maricopa Counties were actually formed from portions of Yavapai County in the 1800s. During that same time period, Cochise, Gila, Graham, Greenlee, Pinal, and Santa Cruz Counties were formed from the split of various counties.

In modern times, Arizona last created a new county in the 1980s, when La Paz split from Yuma. The breakup, however, left the new county without a sufficient tax base to cover its expenses.

What do others think about the proposed split?

Eddie Cook, the Republican assessor in Maricopa County, said his office has plans in place to grow with the county and won’t have trouble handling its current or future workload. The assessor values properties for tax purposes.

"I think the taxpayers will be outraged that they would have to spend that large amount of money to take all the offices and processes that we do and try to replicate it an additional three more times, four separate offices, when one officer can easily do the work that we need to do administratively," said Cook, who is a Republican.

Meanwhile, Craig Sullivan, executive director of the state county supervisors association, said most of what counties do are directly implementing state law.

"We don’t have expansive legislative authority," Sullivan said. He also noted that most services are provided at the city level and 93% of Maricopa County’s residents live in cities.

Two ordinary people we spoke with on Feb. 17 were skeptical of the plan.

"In my opinion it doesn’t make any sense," said one person.

"Maricopa is growing. Everybody loving it out here. There’s no reason to split it up," said another person.

What are the bill's chances in the State Legislature?

It’s unclear if the bill has enough support to pass the full House and Senate, which are controlled narrowly by Republicans.

The measure is moving through the House at the same time the Senate is advancing a bill that would expand the number of members on the boards of supervisors in Maricopa and Pima Counties.

"A Maricopa County supervisor represents more (people) than a member of the U.S. House of Representatives," Sen. J.D. Mesnard, who is sponsoring the bill, said at a hearing late last month. "That does not seem right to me."