As staffing shortages kept the City of Phoenix from keeping up with its bulk trash pick-up schedule in recent months, some residents found themselves looking at a mounting problem that has become an eyesore. FOX 10's Linda Williams has more on a new solution that city officials have come up with.

PHOENIX - Phoenix streets and alleys have seen better days. Bulk trash items are piling up – getting bigger by the day, and it will be that way for a while.

If you're getting ready to put your bulk trash to the curb for pickup, you might want to check the City of Phoenix's website first. Staffing challenges are slowing the process, and it might affect your pickup date.

On the other hand, some residents are hiring private trash pick-up companies.

For residents, the delay is a problem

"I understood by something we got in the mail that there would be a delay in the pickup," said Peter Delannoy.

At first, some residents showed patience.

"It's not that bothersome right now because it gives us a little extra time to put trash out, and it's a little cooler and less humid out right now," said Francis Kremer.

"A week would be too much. If it's a couple of days late, it's not a problem," said Michael Jordan.

"There’s a lot of things to be worried about in our world right now, and having a delay on picking up the stuff out in front of the yard is not a concern really," said Delannoy.

However, challenges remain, and as time wore on, some residents say they believe it is unacceptable for pickup to be so late.

"It's been about a month now, and I still have the pile here," said James Lanier, who lives in north Phoenix. "When it’s just the trimmings from the trees or the bushes, it’s not a big deal. When it’s something like a mattress or something along those lines, it’s a lot grosser, and it’s a much bigger eyesore."

Lanier said his bulk trash pickup date was originally set for September. That day came and went, and he is not sure when it will be picked up.

"I’ve heard it’s going to be early November, so hoping that will be the case but at this point. Who knows?" said Lanier.

Phoenix resident Stephanie Wheaton said, "Really sad that they allow this to happen."For them to allow trash to lay there for weeks and weeks on end ... it’s unacceptable."

The City of Phoenix has posted a statement on their website regarding the delays. It reads, in part:

"Due to staffing challenges, the City of Phoenix Solid Waste Division is currently experiencing a significant delay with bulk trash collection."

"There’s a national shortage of CDL drivers, so Phoenix, unfortunately, is not immune to that national shortage," said City of Phoenix Public Works Director Joe Giudice. "Right now, we are at about 20% vacant. About 60 positions."

"What I'm hearing from the drivers is, ‘look. Other cities are paying more. I have less routes, less stress, and I can have a quality of life with my family,'" said Councilmember Laura Pastor. "'What's happening in Phoenix is not only am I doing my regular hours, I'm also being told I'm going to do overtime.' So we're burning people out."

Phoenix residents taking matters into their own hands

Chris Bodesten might work in the trash business, but he says profit in the past few weeks has been anything but trash.

"We’ve been getting a lot of calls from customers afraid that the city of Phoenix isn’t picking up their bulk trash, and it’s been sitting in front of their house for like 3 to 4 weeks," he said. "It’s starting to stink in some places or rodents are starting to get in, and they’re just over it, so they’ve hired us to go in there and pick it up."

Felipe Moreno with the city says aside from working tirelessly to get this issue resolved, the city is aggressively hiring and working to retain current employees, offering $3 more an hour along with hiring and retention bonuses. He admits the solution is still a few weeks away.

He gave a date of Nov. 21 for the city to be fully caught up.

"I apologize to the residents out there for the delay, and I want to thank them for their understanding and patience as we work hard to get caught up," Moreno said.

Some Phoenix residents are not wanting to wait that long and are hiring companies, like Chris's, to take out the trash.

"Some people can pay the extra money to have it picked up, but other people have to wait until bulk trash gets their stuff together and to hire enough people for the situation to clear itself up," Bodesten said.

City comes up with new solution

As bulk trash pick-up schedules continue to be affected, city officials have placed green dumpsters in some neighborhoods.

"It's been quite the relief," said Jeff Tison, who lives in an area where a green dumpster was placed as a temporary fix.

Technically, the dumpster is called a 40-yard rolloff bin. Workers with the City of Phoenix Public Works drops it off empty, and picks it up when it's full.

Tisot says neighbors have been overwhelmingly positive about what this call ‘do-it-yourself’ bulk trash, and there have very few complaints.

"It sure beats having to haul it up to the dump yourself and pay for it," said Tisot.

"A lot of credit goes to the community for working to find creative solutions to take care of their community," said Felipe Moreno with the City of Phoenix.

Tips from the city:

City officials say bulk trash pickup delays are due to staffing challenges, but residents in parts of Phoenix say the delays are becoming a problem. FOX 10's Stephanie Bennett reports. 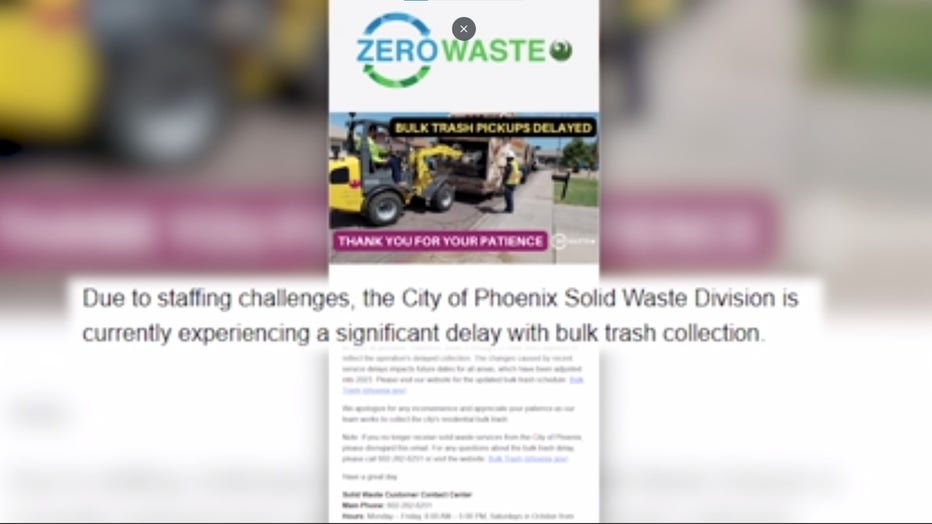