CAR-T cell therapy is not new, but a study published in the journal Nature found solid evidence that the treatment not only works quickly but appears to be a permanent cure for patients diagnosed with certain blood cancers, such as leukemia.

After a nearly decade-long study, doctors said a revolutionary gene therapy called CAR-T cell therapy could be the answer to curing cancer.

CAR-T cell therapy is not new, but a study published in the journal Nature found solid evidence that the treatment not only works quickly but appears to be a permanent cure for patients diagnosed with certain blood cancers, such as leukemia.

The treatment essentially extracts a patient’s existing immune cells from their body and takes those cells to a lab where they are genetically modified to recognize harmful cancer cells. Once they are modified, those cells are put back into the patient and the CAR-T cells attack and kill cancer cells according to Dr. David Porter, one of the lead authors of the study and director of cell therapy and transplantation at Penn Medicine.

"Think of it like the cancer cell has a piece of Velcro on it and the T cell can’t stick to it. What we’re essentially doing is taking out the patient’s T cells and genetically modifying those to put that other piece of Velcro on the T cell so now, when it recognizes the cancer cell, they can stick together and now that T cell, that immune cell can stick to it and actually kill it," Porter told FOX TV Stations.

Researchers observed just two patients for this study for 10 years and both patients have had no signs of cancer since the start of their treatment in 2010.

After just 30 days following the CAR-T cell therapy, both patients were in remission, according to Porter. 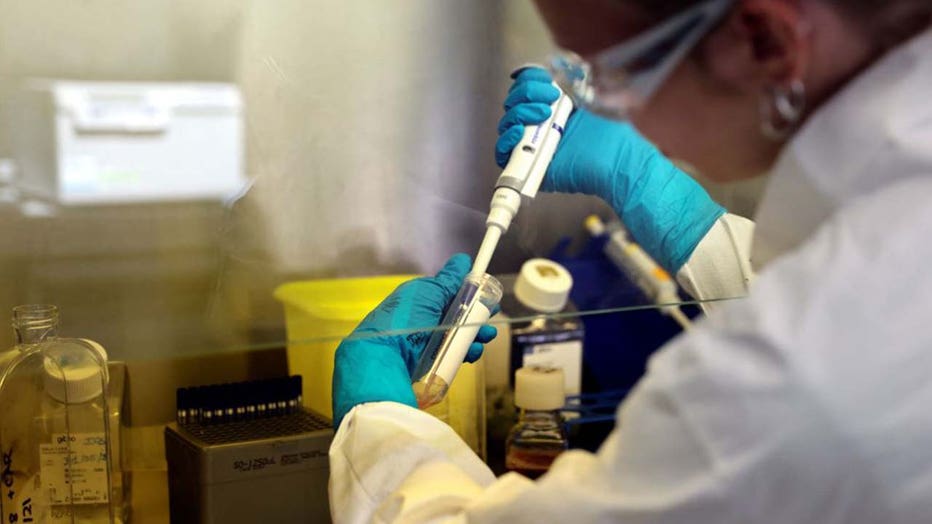 FILE - A lab technician works on a research process to find new CAR-T cells and RNA in a laboratory.

And the key reason the cancer has been kept at bay, according to Melenhorst, is because of the immune cell’s memory.

"Immune cells remember what they have seen before and if a T cell, for instance, recognizes COVID, then COVID will not be as problematic as the first time a patient encounters it. Same thing with all viruses and that’s because there is immune memory. Remembering is very important and that’s something that we see at play in both patients and what we have seen in other patients," Dr. Jan Joseph "Jos" Melenhorst, lead author of the study and a research professor of pathology and laboratory medicine at the Perelman School of Medicine at the University of Pennsylvania, explained.

Cancer patients who were part of the study received just one infusion of the CAR-T cell therapy and had follow-ups with their doctors at five, eight and 10 years. With each visit, cancer cells were nowhere to be found but CAR-T cells continued to thrive within their systems.

Melenhorst is hopeful that as they continue to follow these patients down the line, the CAR-T cells will continue to survive within their bodies and will have essentially cured patients of cancer.

And while this particular study only concentrated on patients with blood cancers, both Melenhorst and Porter said there are early clinical trials in the works to test CAR-T cell therapy on other diseases such as ovarian cancer, pancreatic cancer, lung cancer and even melanoma.

"There’s been tremendous amounts of effort in the field going toward trying to develop similar therapies to target other kinds of cancers. There’s a lot of interest and a lot of optimism that this therapy can be developed to target many different kinds of cancers in the future," Porter said.

Despite the positive results of CAR-T cell therapy thus far, it is only looked at as a last resort for cancer patients.

One of the reasons are the side effects that can occur with it.

Risks of this type of treatment include an immune overreaction called "cytokine release syndrome," which can trigger high fevers and plummeting blood pressure and in severe cases organ damage. Some patients also experience confusion, hallucinations or other neurologic symptoms.

However, despite some of the scary side effects, Porter said there are therapies to prevent and treat them.

"We’ve now developed essentially an antidote. We’ve developed a therapy that can treat or prevent this bad side effect. I will say it works in many, though not all patients, but because of this, this therapy has to be given at a very specialized center who has expertise, who has experience and who has the infrastructure to really take care of these patients," Porter explained.

Another reason this treatment is considered as a last resort is due to its price for treatment.

On average, CAR-T cell therapy can cost anywhere between $300,00 and $400,000 per treatment, due to the processes taken to remove the cells, genetically modify those cells and infuse them back into the patient. Not only that, but follow-ups need to be made throughout a patient’s treatment.

Regardless of price and the side effects associated with the treatment, CAR-T cell therapy has a promising future in cancer treatment.

"From the first patient we treated in 2010, within seven years it became an FDA-approved drug in 2017. And in fact, there are now five different FDA-approved CAR-T cell therapies for six different kinds of malignancies," Porter continued.

"Now that it’s understood how potent these treatments can be, now that it’s understood how to manage some of the side effects, there’s a lot of interest in starting to use them earlier in the course of somebody’s treatment," Porter said. "In fact, there was just very exciting news back in December and published in the medical literature about using these therapies for patients with lymphoma not after they’ve had four or five or more treatments, not after they’ve failed every possible option. But really as their second treatment. If they get their initial treatment, maybe it didn’t work, perhaps you can use CAR-T cells earlier in the course of disease. There’s also a number of clinical trials being done trying to use it even earlier than that."

Doug Olsen, one of the two patients who received the revolutionary treatment, said he’s extremely grateful for the decade of life since doctors used cutting-edge science to save him.

"What’s changed is the dimension of hope. The pace of discovery takes your breath away," he said. "It’s a brand new world."