They come in small packages, but they have big personalities and they just love to please. Chihuahuas is one of the most popular dog breeds out there, and despite being all dog, they can also behave well when they have to, especially around people who could use a smile. FOX 10's Kari Lake reports.

PHOENIX - They come in small packages, but they have big personalities and they just love to please.

Chihuahuas is one of the most popular dog breeds out there, and despite being all dog, they can also behave well when they have to, especially around people who could use a smile.

"As still as they are here, they are exactly the opposite at home," said Chris Foote.

Foote has a well-dressed posse consisting of four female therapy chihuahuas during a recent visit to Banner University Hospital in Phoenix. The four are 2.5-year-old Aspen, 4.5-year-old Asia, 1.5-year-old Seattle, and 1.5-year-old Portland. They are part of the hospital's pet therapy program, and the four dogs are possibly the smallest to ever take part. They do, however, play a very big role when it comes to patient recovery.

"We have our pups, and we have a good number of them over 40 who come into the hospital and they visit with patients," said Kristina Proctor, Senior Manager of Volunteer Resources. "It's remarkable to see what they do not only for the patient but for the family members as well. It reduces their anxiety. Sometimes, even their sensations of pain will diminish just by having the distraction of that dog."

It took some time before dogs were accepted at Valley hospitals like Banner University Center.

"When I first started, there were only three or four dogs who were coming in to visit. and people were asking why are dogs in the hospital so we had to educate them about therapy dogs," said Janet Sinohi, a dog team leader.

However, the benefit of therapy dogs soon becomes clear.

"If you've ever been in the hospital and you miss your dog, that's what is going on," said Sinohi.

FOX 10 cameras were there as Foote put one of her dogs to work.

"When a dog therapy person knocks on the door and asks to come in, when the person sees the dog and the change on their face, it just brings them something else to think about," said Sinohi. "The conversations are about the dog, and they tell you about a dog they had a long time ago. Sometimes they cry and that's OK. That's what the dogs are there for."

According to the Therapy alliance dog rules, you can only work one dog at a time because they have to get your full attention," said Foote. "I love working the ICU (Intensive Care Unit), where people are really sick. I can put them on the bed and they won't move. They won't touch any of the tubing or wiring, and they lay very still so the patient can hug them."

Foote started working with therapy dogs after her own dog visited her in the hospital.

"I trained them for that because years ago, I was in the ICU for a very long time," said Foote. "If it hadn't been that the nurses there were so kind -- there was no dog program at the time. My friends were allowed to sneak my dogs in to me, or I would have lost my mind. I'm hooked on this program. This has been my life."

The hospital says therapy dogs require no special training. They just have to be very sociable and like to please people. They also come in all sizes. from Dobermans and German Shepherds, to the smallest chihuahuas with a big heart. 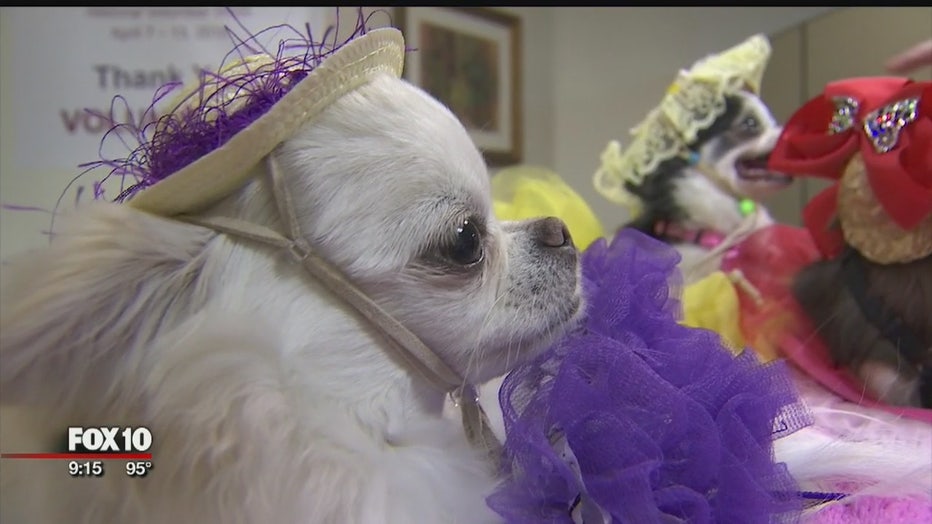