CHANDLER, Ariz. - Every community has its holiday traditions and with Christmas just six weeks away, crews began building Chandler iconic Tumbleweed Tree right in the heart of downtown Chandler.

It's a Christmas tree with an Arizona twist.

"It's Arizona and the tumbleweeds are everywhere," said Michael Quihuas said.

Dating back to 1957, the unique tree has become a tradition. 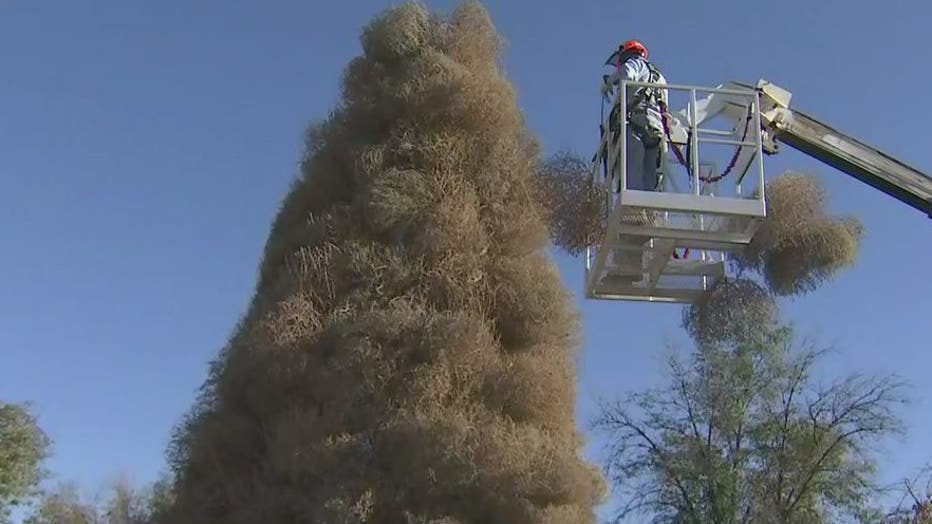 "There's thousands and I think everybody looks forward to it, so a lot of people come out just to look at it," Quihuas said.

The City of Chandler Parks and Maintenance says before the annual Christmas celebration, first, their search for the tumbleweed begins in October.

"The tradition is we don't really count each one, so we figured by trailer loads we get in the trailer -- it's probably about 500 to a thousand," Quihuas said.

But before unloading trailer loads of tumbleweeds in downtown Chandler...

"We put the frame up and stick wire that goes into it and there's a pole in the center of it and once that's all done, you can see they're putting tumbleweeds on it," Quihuas said.

After building the 35-foot-tall tree comes all the fun -- gallons of paint, hundreds of lights and a lot of glitter -- all before the tree-lighting ceremony and parade in December.