TUCSON, Ariz. - A dedication ceremony was held on Jan. 8 for a memorial to victims of the 2011 shooting in Tucson that left six people dead and then-U.S. Rep. Gabrielle Giffords and others injured.

Due to the coronavirus pandemic, the ceremony on the shooting's 10-year anniversary was not open to the public but several local television stations were expected to broadcast the ceremony and it was livestreamed on Pima County's Facebook page.

The memorial next to the Historic County Courthouse in downtown Tucson was created for the victims, survivors and emergency personnel who responded to the shooting outside a Safeway store where Giffords was holding a meet-and-greet event.

The dedication ceremony included a prayer, remarks by Ron Barber, a former Giffords aide who was wounded in the shooting, bell-ringing timed to when the first shots were fired and a video.

Gabrielle Giffords released a statement on the 10-year anniversary of the shooting:

"On this morning ten years ago, my life and my community changed forever. The Tucson shooting shook our city to its core. But it did not break me or the people I represented in Congress. Instead, we came together, turned our pain into purpose, and along the way found hope in each other.

"It hasn’t been easy. There have been plenty of obstacles and adjustments along the way. One of the hardest decisions I had to make was stepping down from Congress, where I served the community I will always call home. But I continued to work on getting better while never forgetting the lives we lost.

"Tucson never stops fighting and we are moving ahead together, serving as an example for the nation. My recovery has taught me that even the smallest victories can result in progress. Each day, we are given a new opportunity to achieve a safer America, and we must continue that struggle through the next decade and beyond." 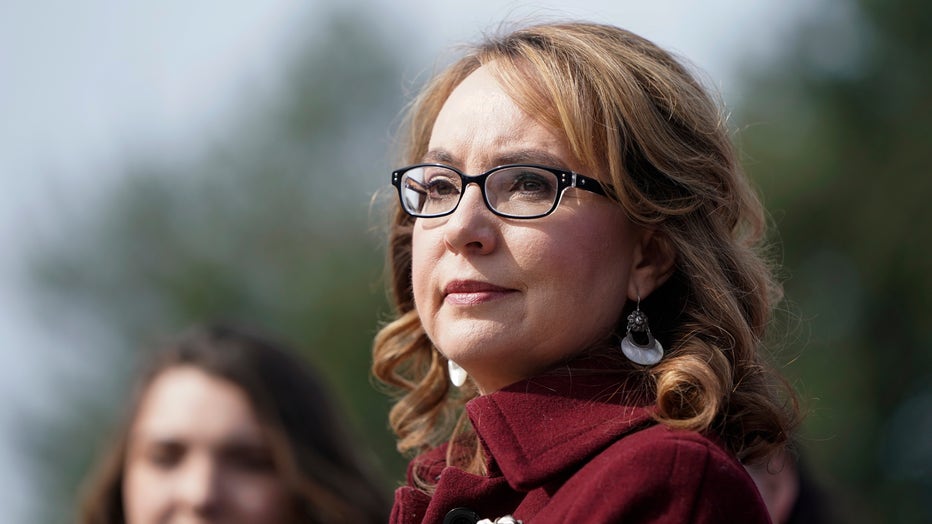 In the years since the shooting, Giffords and her husband, recently elected U.S. Sen. Mark Kelly, advocated for gun control.

Officials hope the memorial will be open to the public by early February if permitted by pandemic conditions, the statement said.

Construction of the memorial was funded through donations and was delayed several times after workers found pottery and other historic items buried underground.

The gunman, Jared Loughner, is serving a life sentence at a federal medical center in Rochester, Minnesota, according to federal prison records.

Dedication for memorial to victims of Tucson shooting

A Jan. 8 dedication ceremony was underway for a memorial to victims of the 2011 shooting in Tucson that left six people dead and then-U.S. Rep. Gabrielle Giffords and others injured.

As a pro-Trump mob laid siege to the U.S. Capitol this week, former Rep. Gabby Giffords could only wait nervously for news about her husband, Mark Kelly, who was barely a month into his job as a senator from Arizona.

A decade earlier it was Kelly enduring the excruciating wait for news about Giffords, who was shot in the head in an attempted assassination that, like Wednesday’s siege, shocked the nation and prompted a reckoning about the state of politics and discourse in the United States.

For some who survived the attack 10 years ago Friday, the violence inside the U.S. Capitol this week was a painful reminder of that day, when a gunman with paranoid schizophrenia killed six and injured 12, in addition to Giffords, who was meeting with constituents in a grocery store parking lot in Tucson.

"It oftentimes gets forgotten because we are in a heightened and really vitriolic place in politics — every single one of those people, whether they were a staffer, security guard, member, is a human being," said Daniel Hernandez, the Giffords intern who was credited with saving her life when he put pressure on her bleeding head wound while waiting for paramedics.

The storming of the Capitol "was a stark reminder that at any moment we could go from having a congressional event that we all think is held to a different standard, and yet in five minutes we had people on the (Senate) floor, people in Nancy Pelosi’s office," said Hernandez, who is now a Democratic state lawmaker representing part of Tucson in the Arizona Legislature.

The county commemorated the 10-year anniversary Friday and dedicated a memorial to those slain and injured.

The shooting of Giffords, her staff and the constituents who arrived to speak to their congresswoman rattled the nation in the aftermath of the bitter and contentious 2010 election, which saw the Tea Party movement sweep Democrats from office around the country. Giffords had barely retained her seat.

It prompted an extraordinary show of unity. At President Barack Obama’s state of the union address a little more than two weeks later, Republicans and Democrats sat side by side instead of clustering on opposite sides of the chamber.

It was short-lived. The country is more polarized than ever. Congress was threatened.

Kelly was in the Senate chamber on Wednesday when the mob breached the Capitol, and he was escorted to a safe location, his spokesman, Jacob Peters, said.

"As I sat waiting for information about @SenMarkKelly’s safety today, I couldn’t stop thinking about what you must have gone through 10 years ago this week," Giffords wrote on Twitter Wednesday after it was clear lawmakers were unharmed. "I’m so glad you and your staff are safe. I love you, sweetie."

The shooting a decade ago left Giffords with limited motion on one side and aphasia, a verbal disability. She can think clearly but struggles to form the words and sentences to express her thoughts. Still, with significant help from her speech therapist, she’s advanced considerably since the early days of her recovery, when she could say just one word: chicken.

The nation glimpsed her progress at the Democratic National Convention in August, when she delivered a poignant 90-second speech in support of President-elect Joe Biden, her longest public speech since the shooting. She regularly gave brief remarks to introduce her husband at key moments in his 2020 campaign.

Giffords left Congress after the shooting to focus on her recovery, cutting short a political career that many in Arizona believe would have included a run for governor or U.S. Senate.

She went on to create, along with Kelly, a political group that lobbies for tougher gun laws and works to elect state and federal lawmakers who will support them.

"She has probably touched many more lives in a positive sense than if she had been able to, say, become senator or governor," said Pam Simon, a Giffords friend and former staffer who was shot in the chest. "She has touched lives worldwide. She’s inspired survivors all across the country. She’s inspired people with disabilities."

The new memorial in front of a restored downtown courthouse features gardens named for each of the six people killed and tells the stories of the victims and survivors. There are also tributes to first responders and Tucson’s history.

The dead included John Roll, Arizona’s chief federal judge, who’d stopped to thank Giffords for her help to address a crush of border-enforcement cases. A new courthouse has since been built in Yuma and named for Roll. Gabe Zimmerman, Giffords’ community outreach director, was the first congressional staffer killed on the job in the United States.

"Gabe was actually my closest friend and he was my person that I bounced my ideas off of," said his father, Ross Zimmerman. "So losing him is a problem on multiple levels for me."

Days after the shooting, President Barack Obama flew to Tucson to console a grieving city and nation. In his plea for civility, he homed in on Christina Taylor Green, a 9-year-old victim who’d recently been elected to the Student Council and was just beginning to understand the meaning of democracy. She went to see her congresswoman with a child’s optimism and a belief that public service is exciting and hopeful.

A decade later, in the aftermath of an insurrection at the U.S. Capitol, his words carry new meaning.