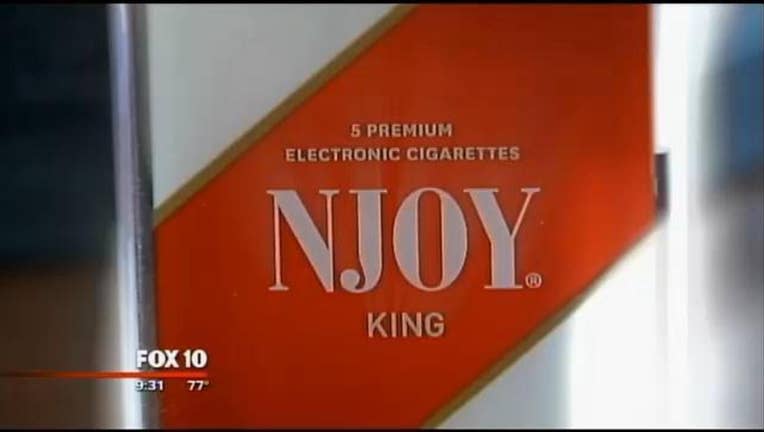 E-cigarettes certainly look like people are smoking them, but they aren't.

Unlike conventional cigarettes, you're not actually lighting these up, thus no smoke.

Instead, it's water vapor and the makers of e-cigarettes claim their products contain none of the bad things that you find in cigarette smoke.

Smoking is addictive and it's dangerous and everyone knows it, but lots of people still do it.

Is there a better alternative?

Yes, say makers and sellers of e-cigarettes. Instead of smoking, they say, try vaping. Instead of breathing in and blowing out smoke, it's water vapor.

An e-cigarette that looks like a cigarette is called NJoy.

"It has a paper feel. It is flexible and squeezable, looks like a cigarette, looks like smoke, but it isn't," said NJoy President Craig Weiss.

NJoy is based in Scottsdale and the company says it is the largest independent maker of e-cigarettes. A single NJoy e-cigarette costs just under $8. It could last the average smoker about as long as two packs of cigarettes.

"The product looks like a cigarette, but of course it is not one and the way we have accomplished that is through a fairly sophisticated amount of technology packed into a pretty small package," said Weiss.

Vape shops are popping up around the valley. We visited the Blue Vapor Lounge in North Phoenix. Here, they sell stylish ways to vape.

You charge them up, pick a flavor: we saw apple, cherry, coconut, pear and melon, apple and black currant, peanut butter brownie and there are many, many more. You can also add nicotine to e-cigarettes.

The owner of Blue Vapor Lounge says vaping is better than lighting up.

"So far, we do not see any problems with it. People start quitting and do vaping more than smoking.. breathe better, taste food different way," said Bashar Dababneh.

But not everyone is a fan of e-cigarettes. In Arizona, it is illegal to sell them to minors. The Attorney General says the rising popularity of e-cigarettes among young people is truly alarming.

"Nationally, the number has doubled from 1 in 20 teenagers to 1 in 10 and it delivers a high dose of nicotine, which is extremely addictive and they are finding other bad chemicals in e-cigarettes, so this is something minors should not have," said Tom Horne.

States from around the country are following suit.

In 37 states, attorneys general have signed onto a request to the U.S. Food and Drug Administration, urging the FDA to crack down on selling and marketing e-cigarettes to anyone under 18. The request says the nicotine in e-cigarettes is not only addictive; it is toxic in high doses.

"Nobody knows what is in them with the FDA not having made any rulings, the vapes, the e-cigarettes could be full of any kind of substance, so we are not sure what is in them.. inhaling what is in vapor and second-hand vapor.. nobody is quite sure what is going on," said ALA's Christian Stumpf.

But fans of e-cigarettes say vaping is still much better than smoking. Some people who were smokers say e-cigarettes helped them kick the habit.

"I think they are nice, good alternatives to cigarette.. you get the nicotine and water vapor, feel like you are smoking.. it is a good time," said Jason Gilland.

E-cigarette makers emphasize their products are an alternative to smoking, not a way to quit. And they acknowledge they haven't been tested to see if they actually help people stop lighting up. Even so, while plenty of people still smoke, an increasing number vape.

Makers of e-cigarettes say their products are not intended for anyone under 18 years old and their target audience is existing adult smokers.