The abrupt closure of a Valley company has left employees confused, and wondering when they will get paid for the time they worked.

PHOENIX - On Friday morning, many workers showed up at produce company Bella Fresh, located near 51st Avenue and Van Buren, to collect their paycheck. To their surprise, workers arrived to find a locked door, with a sign that read: "As of right now, there is no update on paychecks."

"I understand that they closed and things happen, that's life, but I don't understand why can't they pay us," said Christina Rodriguez.

"Personally, they owe me at least 95 hours," said Michael Navarro. "95 hours plus from last week and this week, and that's not including overtime."

Rodriguez and Navarro say they heard on Wednesday that the company would be closing. Although shocked, they had no idea the closure means they won't be getting paid on Friday.

"Some of us work really hard to get what we need," said Rodriguez. "It's sad. They say you should never depend on nobody, and so we depend on ourselves by getting a job, and this is what happens." 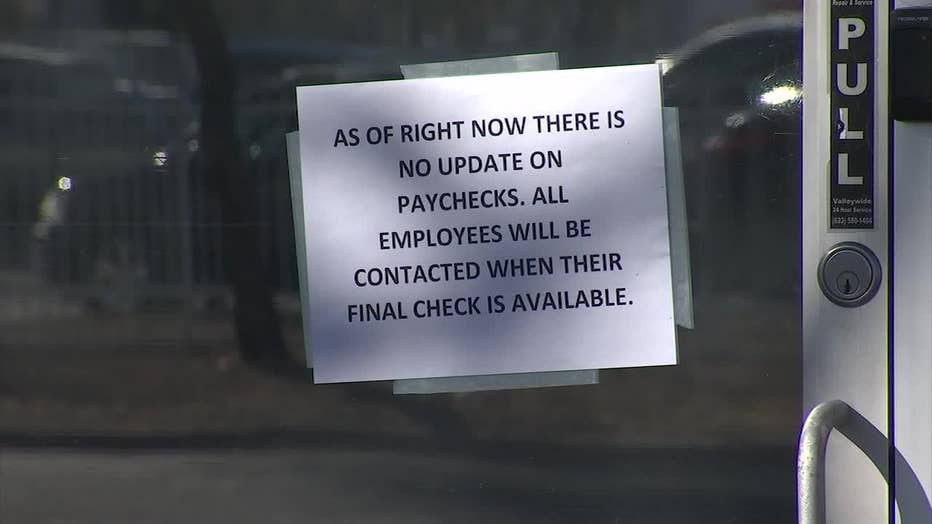 FOX 10 has reached out to the company for comment, and received an e-mail that only reads "the company is officially closed." Company officials did not give a reason, nor did they say if or when the employees will be getting paid.

According to court records, the company filed for bankruptcy in October.

A manager, identified only as Manny, has worked with the company for 16 years. He says he had no idea the company had any problems, because things appeared to be running smoothly.

"I feel horrible because my employees are calling me and asking questions, and all I can say is I don't know," said Manny.

Employees say they are also worried about not receiving their W-2 forms.