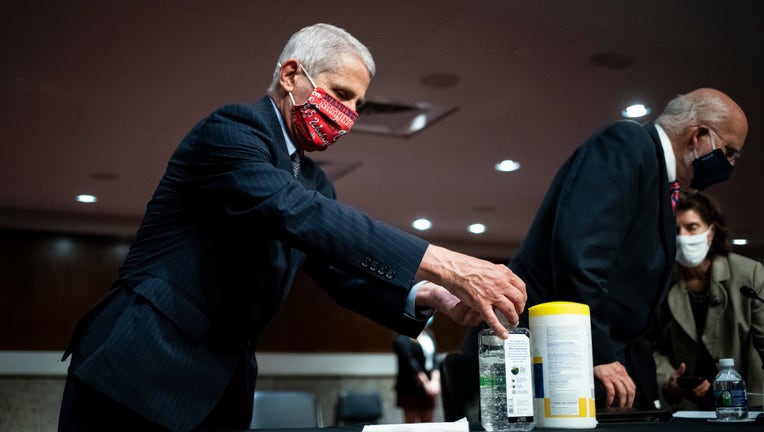 LOS ANGELES - Speaking during a webcast on Wednesday, July 22, with TB Alliance, a tuberculosis treatment nonprofit, Dr. Anthony Fauci, the director of the National Institute of Allergy and Infectious Diseases said that the coronavirus is here to stay.

"I think we ultimately will get control of it. I don't really see us eradicating it," the United States' leading infectious disease expert said, explaining that the virus' high transmissibility makes it highly unlikely that it will be completely eliminated.

“I think with a combination of good public health measures, a degree of global herd immunity and a good vaccine — which I do hope and feel cautiously optimistic that we will get. I think when you put all three of those together, I think we will get very good control of this," Fauci said.

This week, Scientific Advisory Group for Emergencies member and director of the Wellcome Trust Jeremy Farrar told the United Kingdom’s parliament that the novel coronavirus will most likely be around for “decades” to come.

“Things will not be done by Christmas," said Farrar while addressing the House of Commons health and social care committee. “Even actually if we have a vaccine or a very good treatment, humanity will still be living with the virus for many, many years to come.”

UK scientist says coronavirus is not going away

Jeremy Farrar, a world renowned clinical scientist and a leading figure in the field of infectious disease, told members of parliament in the United Kingdom that the novel coronavirus is not going away.

RELATED: COVID-19 likely to be around for ‘decades,’ UK scientist says

Both Fauci’s and Farrar’s comments come in contrast with those of their nation’s leaders.

Last week, the United Kingdom’s prime minister, Boris Johnson, claimed that the entire country would be planning for a “significant return to normality” by Christmas.

During an interview with FOX News Sunday’s Chris Wallace that aired on July 19, U.S. President Donald Trump said, “I think we're gonna be very good with the coronavirus. I think that at some point that's going to sort of just disappear. I hope.”

But on Tuesday, July 21, Trump appeared to change his tone at a revived daily coronavirus briefing when he warned that the “nasty horrible’” coronavirus will get worse in the U.S. before it gets better.

“It will probably unfortunately get worse before it gets better,” Trump said from the White House. But he also touted a reduction in deaths and progress on vaccines and treatments for COVID-19, which he referred to repeatedly as a the “China virus.” He continued his recent encouragement of Americans to wear masks when social distancing is not possible.

Just before the Tuesday press briefing, Trump took to Twitter to claim that “by comparison to most other countries, who are suffering greatly, we are doing very well — and we have done things that few other countries could have done!”

Meanwhile, laboratories across the U.S. are buckling under a surge of coronavirus tests, creating long processing delays that experts say are actually undercutting the pandemic response.

With the U.S. tally of infections at 3.9 million Wednesday and with new cases surging, the testing bottlenecks are creating problems for workers kept off the job while awaiting results, nursing homes struggling to keep the virus out and for the labs themselves, dealing with a crushing workload.

Some labs are taking weeks to return COVID-19 results, exacerbating fears that asymptomatic people could be spreading the virus if they don’t isolate while they wait.

U.S. officials have recently called for ramping up screening to include seemingly healthy Americans who may be unknowingly spreading the disease in their communities. But Quest Diagnostics, one of the nation’s largest testing chains, said it can’t keep up with demand and most patients will face waits of a week or longer for results.

The U.S. is now testing over 700,000 people per day, up from less than 100,000 in March. Trump administration officials point out that roughly half of U.S. tests are performed on rapid systems that give results in about 15 minutes or in hospitals, which typically process tests in about 24 hours. But last month, that still left some 9 million tests going through laboratories, which have been plagued by limited chemicals, machines and kits to develop COVID-19 tests.

There is no scientific consensus on the rate of testing needed to control the virus in the U.S., but experts have recommended for months that the U.S. test at least 1 million to 3 million people daily.