Halloween the cat was shot, badly injured and had to be put down after a Feb. 27 incident that Gilbert Police are now looking into. "I held him while she administered the medicine and it was just heartbreaking," his owner said.

GILBERT, Ariz. - A reward is being offered after a Gilbert cat, Halloween, was shot, paralyzed and eventually died.

Halloween's owner, Crystal Reidy, has X-rays that clearly show something was shot into the cat, and she says whoever did this needs to be held accountable.

The black cat was found at just 2 weeks old. He was the runt of the litter, but Reidy says he continued to defy the odds.

"He had to be bottle-fed and had setbacks but he made it to a year and four months and just for someone to do this, it’s just unbelievable," she said.

On Saturday, Feb. 27 around 8:30 p.m., Reidy’s neighbors knocked on her door saying Halloween was in their backyard and not moving.

"So we ran over there and we tried to make it walk and it was just paralyzed, you know, from the waist down," Reidy said.

She found a wound on the family cat that just had a one-year-old birthday party. Now it was time to go to the emergency vet, knowing the end was soon.

"So I just I didn’t have hope. So I’m sorry but had my kids kiss him and say goodbye," she said.

The images at the vet's office show some sort of projectile inside of Halloween. The projectile took his life and now Reidy wants to know who did this. 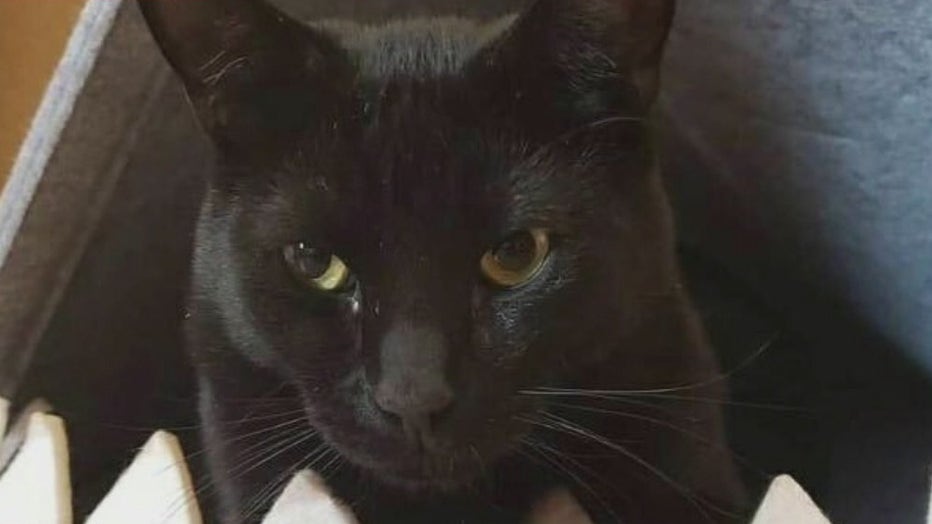 The family filed a report with the Gilbert Police Department. They know it happened between 5 and 8 p.m. on Saturday because of the time stamp on a photo Reidy's daughter took with Halloween that night.

"I held him while she administered the medicine and it was just heartbreaking," Reidy said.

Desert Rain is a local behavioral therapist and has put together a $500 reward for information and Gilbert Police say to call them with any tips at 800-343-TIPS (8477).