Monday marks the first day of the legislative session for 2020, and a group of mothers who want gun laws reform in the state are greeting the lawmakers, as they return. FOX 10's Brian Webb reports.

PHOENIX - A group of mothers gathered at the Arizona State Capitol early on Monday, in an effort to end gun violence.

The mothers are hoping that 2020 is the year for passing what they consider to be "common-sense gun laws" in Arizona.

Moms Demand Action is a nationwide grassroots group that fights for public safety measures to protect people from gun violence. For 2020, they have a specific gun law in mind. one that would get guns out of the hands of domestic abusers.

Mothers who gathered in front of the State Capitol on Monday were decked in red shirts and ready for action.

"Today, we are here to welcome our legislators back into session, and encourage them to support common-sense gun laws," said Laura Hudson, who lost her husband to gun violence by suicide.

According to their numbers, abusers with firearms are five times more likely to kill their female partners in Arizona.

"Our laws are some of the weakest in the nation," said Hudson. "We have no background checks for private gun sales, and that feeds into the problem of domestic abusers getting their hands on guns."

The plan would stop anyone with domestic violence conviction from buying a firearm, as well as people with protective restraining orders. If they already have guns, they would be forced to turn them in.

Some lawmakers, like State Rep. Daniel Hernandez, are listening. State Rep. Hernandez is best known for rendering aid to then Congresswoman Gabby Giffords, when she was shot nine years ago during an event in Tucson.

"Fighting a 45-year head start by the [National Rifle Association], where they have been lobbying and advocating and spending money on elections. Now we have other groups saying we need people in the state helping influence what happens in Arizona," said State Rep. Hernandez.

The moms know they have a big fight ahead, but they believe the majority of Arizonans are on their side, and that the time for action is now. 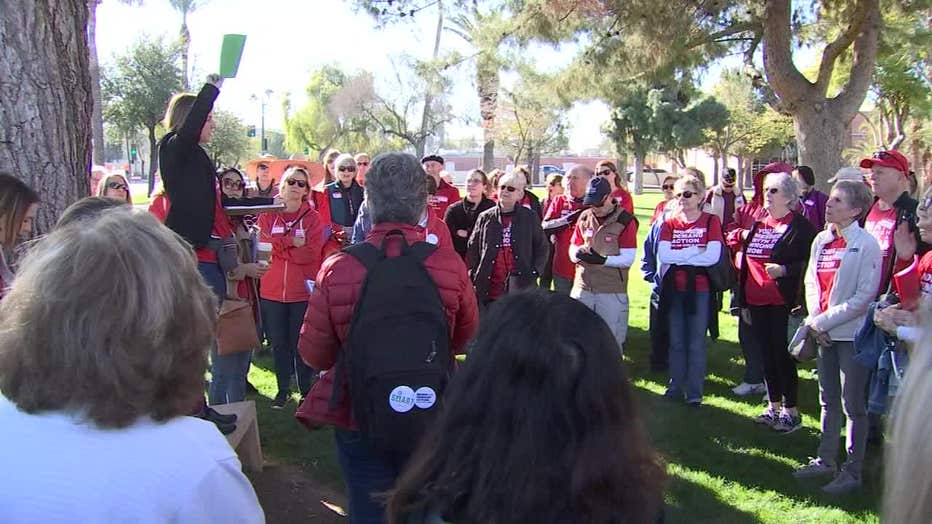 Currently, 29 other states have laws to keep guns away from domestic abusers. The moms will demand action during the legislative session, trying to get their voices heard like so many other groups will do.

FOX 10 has reached out to the NRA for comment, but officials with the group have yet to respond.