President Joe Biden arrived at JFK Airport Thursday ahead of a visit to One Police Plaza to talk gun violence with Mayor Eric Adams.

NEW YORK - President Joe Biden was expected to showcase federal, state, and local efforts to get guns and repeat shooters off the streets during his visit to New York City Thursday.

Gun violence already on the rise during the pandemic is spiking anew, and beleaguered cities are struggling with how to manage it. Biden has been accused from the right of not being tough enough on crime.

While in Lower Manhattan, Biden and Attorney General Merrick Garland will meet with new Mayor Eric Adams, a former police captain. Once an outspoken critic of his own department and someone who was beaten by police as a teenager, Adams portrayed himself during his campaign as someone who could bridge the divide between the New York Police Department and activists pushing for major change.

He will also visit a public school in Queens to talk about community violence and prevention programs. 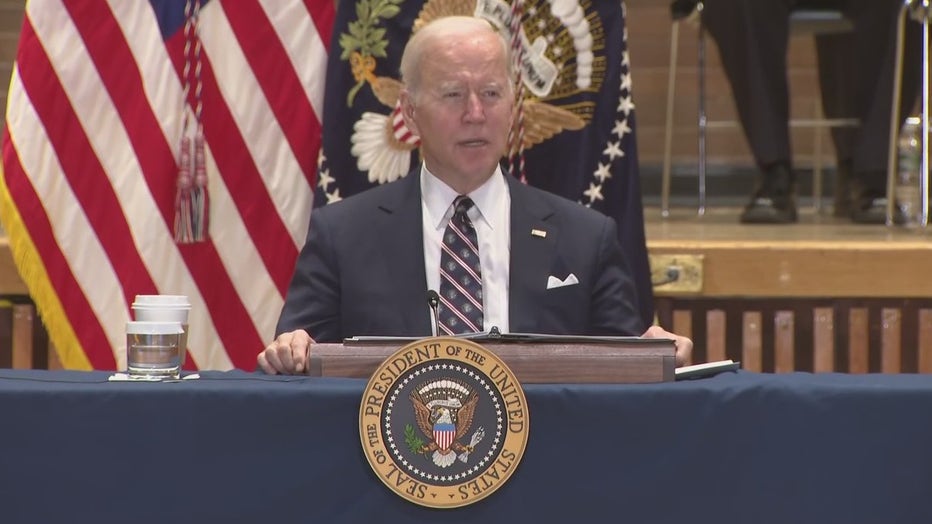 There are limits to what the president can do when there is no appetite in Congress to pass gun legislation. The strongest effort in recent years failed, even after 20 children and six adults were killed in the 2012 Sandy Hook school shooting in Newtown, Connecticut.

Biden also is trying to navigate the complex politics of the moment: finding ways to combat crime while also pushing for greater accountability after killings of Black people by police. The two efforts do not have to be at odds, though they are often billed that way. 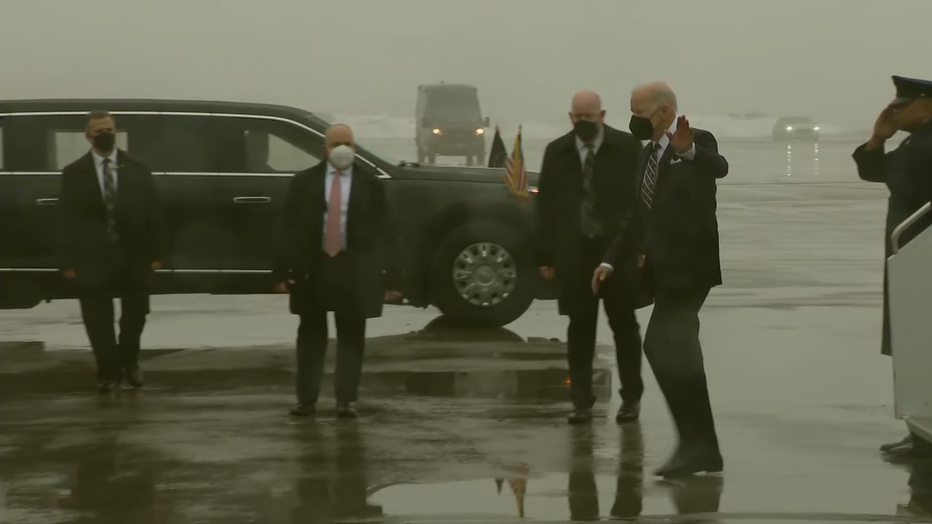 Feb. 3, 2022- President Joe Biden arrives at JFK Airport ahead of a meeting at One Police Plaza. (FOX 5 NY)

All this unfolds against the backdrop of recent polls showing that Americans are increasingly concerned about crime, and that Republicans have an advantage over Democrats as the party that would do a better job dealing with it. The White House is pushing back against GOP efforts to paint Biden as soft.

"I think we all agree or should agree that violent crime is a serious problem," White House press secretary Jen Psaki said this week. "Our view is that instead of turning this into a political football, we need to be focused from the beginning of the president's time in office on reducing crime and keeping our communities safe."

Another cop shot amid rising shootings

An off-duty NYPD cop was shot during an attempted carjacking. He is the sixth New York City cop shot already in 2022. The shootings of officers comes amid a spike in shootings in New York and other cities in the country.

Guns are at the center of the debate as the nation grapples with homicides that spiked nationally in 2020. At least seven 16-year-old kids were killed in shootings last year in New York alone. And 32 officers have been shot on the job so far in 2022, five fatally. Two died in New York in two weeks and two campus police were killed in Virginia on Tuesday.

Some early data suggests that the period between when a gun was purchased and used in a crime and recovered by police has shortened, compared with earlier years.

"It's something of a perfect storm," said Thomas Abt, senior fellow at the Council on Criminal Justice and chair of its Violent Crime Working Group. "There is no one single culprit. Broadly speaking, it's the pandemic, the social unrest and it's guns."

Police are conducting less proactive investigations, while communities are reporting fewer crimes and offering less information when police try to solve them, in part because a widening gulf of mistrust following a focus on killings of Black people by police and the unrest that followed.

"Into all of this walks the president of the United States, who has a 25-year history of work on these issues," said Chuck Wexler, executive director of the Police Executive Research Forum, an organization dedicated to improving the professionalism of policing.

"He has the opportunity as president to use his bully pulpit to send a message to American police, and that could have more impact than any resource the federal government could give." 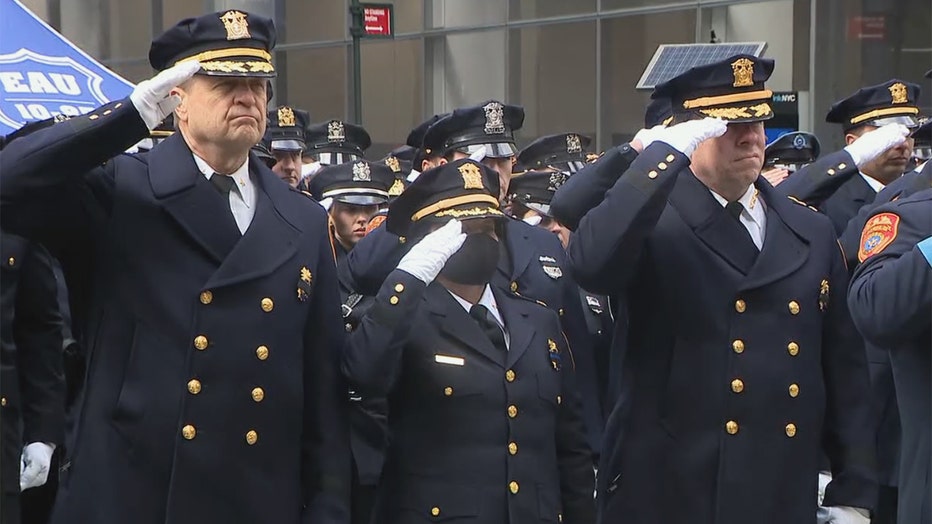 Adams' tough-yet-middle-ground approach is one that Biden and other moderate Democrats have sought out, especially as they try to distance themselves from calls from progressives to shift money away from police departments and into social programs.

So far, Biden has given two major speeches from Washington on crime. He has acted to crack down on "ghost guns," homemade firearms that lack serial numbers used to trace them and are often purchased without a background check. And he has worked to tighten regulations on pistol-stabilizing braces like the one used in a Boulder, Colorado, shooting that left 10 people dead.

Biden has proposed a large increase in dollars for local community policing programs and encouraged cities to invest some of their COVID-19 relief money into policing and pushed alternative crime reduction steps such as increased community support and summer jobs for teenagers.

Some have done so.

"The efforts of criminal justice reform need to include the factors feeding into violent crime," he said. "Our conversations with the White House have been that we recognize the need for criminal justice reform, the role of policing and accountability but we also need to be similarly invested in bringing police the needed resources to address the increase in crime."

Bill Bratton, who served two separate tenures as New York City police commissioner under two mayors, speaks about the latest crime trends in the city. He is the author of "The Profession: A Memoir of Community, Race, and the Arc of Policing in America."

Los Angeles and New York are among the cities with federal strike forces aimed at cracking down on gun trafficking. Federal agents are embedded in homicide units in police departments around the country and the U.S. Marshals Service regularly conducts fugitive sweeps to arrest people with outstanding state or federal warrants.

But even so, police chiefs and prosecutors across the country have been desperate for more federal assistance. And tensions between some police leaders and the Justice Department have risen in recent months, according to two people familiar with the matter.

A recent call with police leaders grew contentious when a few police officials accused Attorney General Merrick Garland and his deputies of failing to put them first and not offering enough support for law enforcement, said the two people, who were not authorized to publicly discuss the private call and spoke on condition of anonymity.

A spokesman for Garland said the challenges faced by law enforcement have been exacerbated by the pandemic and that Justice Department leaders speak with police officials regularly, value their feedback and are trying to support them.

In New York, at a middle-of-the-night news conference following the shooting late Tuesday of an off-duty officer, Adams said he hoped federal and state lawmakers would give police the help they deserved.

"These officers, every day, put on their uniforms, pin that shield on their chest, put that bulletproof vest on and go back into the streets. They still go back and do their jobs. Now it's time for lawmakers to do their job."