PHOENIX - New details surrounding the family of Lori Vallow continue to emerge, months following the disappearance of two children with ties to Arizona.

FOX affiliate KSTU in Salt Lake City obtained a 911 call where Vallow's niece was reported for trespassing, and it gets intense.

The call happened in Utah back in November. Melani Boudreaux actually moved to Idaho from Arizona without her kids shortly after her aunt Lori did. Relatives say they both joined a religious cult led by Chad Daybell.

Now, Melani is involved in a custody battle with her ex-husband.

Just three months ago, police say Melani tried to take her children from their grandparents, twice.

"Get out of my house. Get out of my garage. Get away from my door. Now! Now! The police are on their way," said Carlson Boudreaux, on the 911 call.

The call was made on November 14 in American Fork City, Utah. Carlson was yelling at Melani, who police say trespassed onto her former in-laws' property, despite being told several times to leave.

Brandon Boudreaux used to be Melani's husband. They lived in Arizona and had four children, but after a divorce last summer, Brandon says Melani decided to move to Idaho, following the lead of  Lori, whose kids, JJ and Tylee, haven't been seen since September.

The police report says Melani continued to bang on the door and yell, claiming she had a court order to take her children. Police say she trespassed on the same property just two days prior.

Brandon's father also gave the dispatcher disturbing details. On October 2nd, Gilbert police say Brandon was shot at while he pulled into his driveway. A bullet hit the driver's side window of his Tesla.

The investigation is still open.

American Fork Police say Melani's uncle, Alex Cox drove her to where her children were in a 2020 Kia Telluride. After her arrest, she was booked into Utah County Jail on a criminal trespass charge enhanced by domestic violence.

The day after the arrest, Cox bailed Melani out. Less than a month later, Cox was found dead in Gilbert. 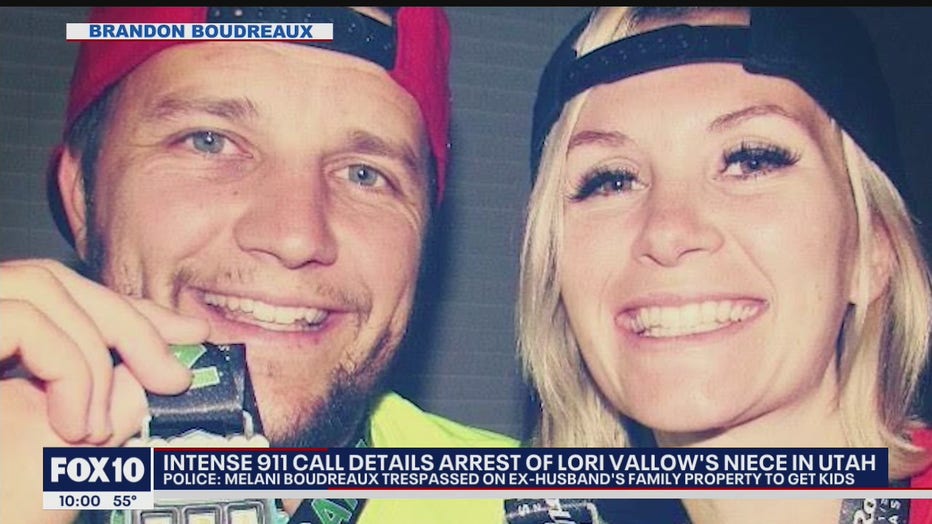