LONDON - Ireland's health service shut down its IT systems on Friday after being targeted in what it called a "significant ransomware attack."

The Health Service Executive said the move was a precaution, and appointments for coronavirus vaccinations were not affected.

"We’ve taken a precautionary measure to shut down a lot of our major systems to protect them," chief executive Paul Reid told broadcaster RTE.

"We are at the very early stages of fully understanding the threats, the impact and trying to contain it."

It was unclear how wide the disruption to the health system was. Dublin's Rotunda maternity hospital said it was canceling most routine appointments due to the IT issues, calling the situation a "critical emergency." 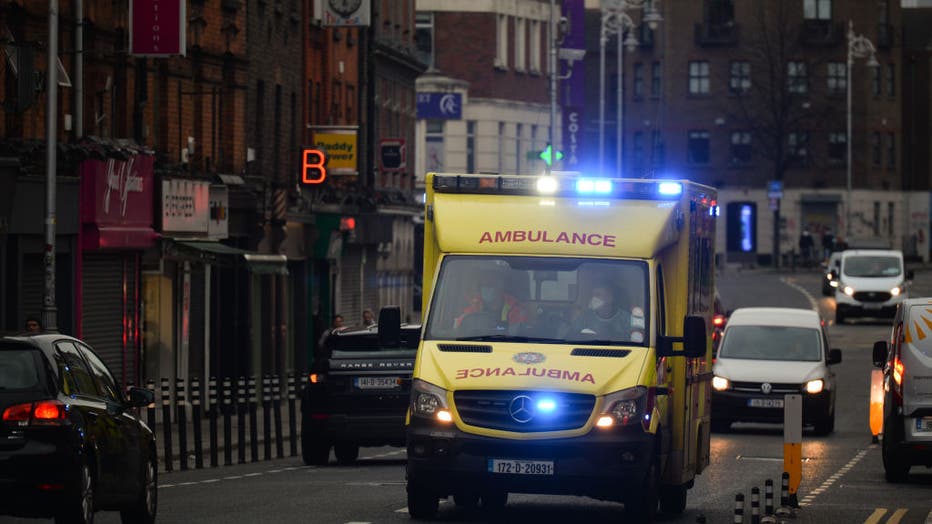 FILE IMAGE - An ambulance is seen in Dublin's city centre on March 27, 2021, in Dublin, Ireland. (Photo by Artur Widak/NurPhoto via Getty Images)

Ransomware attacks are typically carried out by criminal hackers who scramble data, paralyzing victims' networks, and demand a large payment to decrypt it.

Health care systems have been a target before. Two hospitals in France were hit by ransomware attacks in February that crippled their phone systems and forced surgeries to be postponed. In September, an apparently misdirected ransomware attack on a German hospital caused an IT systems failure and led to the indirect death of a woman, while that same month a ransomware attack paralyzed a chain of more than 250 U.S. hospitals and clinics.

In 2017, Britain’s National Health Service was hit in a cyberextortion attack, forcing hospitals to close wards and emergency rooms and turn away patients.

"National healthcare services are already under strain from the pandemic, which will make this ransomware attack even more devastating. That fact will not be lost on the hackers," Forbes said.

What happened in the Colonial Pipeline ransomware attack

Colonial Pipeline, the operator of a major pipeline system that transports fuel across the East Coast said it had been victimized by a ransomware attack and had halted all pipeline operations to deal with the threat.

In the U.S., the nation’s largest fuel pipeline was hit with a ransomware attack a week ago. The disruption of the Colonial Pipeline caused long lines at gas stations due to distribution problems and panic-buying, draining supplies at thousands of gas stations. It restarted operations on Wednesday.

Forbes said the attacks on the pipeline and the Irish health care system both show "criminal groups are choosing targets that will have the greatest impact on governments and the public, regardless of the collateral damage, in order to apply the most leverage."