Haunting video was shown in court Thursday of Ethan Crumbley at the shooting range with his mom, Jennifer – practicing, with the same gun used in the Oxford High School shooting.

Following closing arguments from both the defense and Oakland County Prosecutor, Rochester District Court Judge Julie Nicholson ordered the parents of Ethan Crumbley to stand trial and bound over.

Despite the defense asking for a change in bond, none was given by the judge.

Citing Ethan's troubled mental state and the parent's willingness to purchase a firearm, which was allegedly used in the mass shooting last November, Nicholson said the "court finds that the four victims could have been avoided if James and Jennifer Crumbley exercised ordinary care in the diligence of their son."

Thursday was the second court date for the Crumbleys' preliminary exam.

The last time the Crumbley parents were in court, text messages between Ethan and Jennifer were read and discussed, including concerning messages that prosecutors said she ignored. Those exact messages were read during the hearing. Here's a recap of what was discussed.

Five witnesses testified during the preliminary hearing. One was the caretaker of the Crumbley's horses who texted with Jennifer the day of the shooting. Three employees from Jennifer's workplace also testified, including her boss who she confided in that "he's going to kill himself. He must be the shooter. I need a lawyer. Ethan did it."

Detective Edward Wagrowski from the Oakland County Sheriff's office, the last witness to take the stand on Feb. 8 resumed cross-examination on Feb. 24.

Defense Attorney Shannon Smith began with questions about various text conversations between James and Jennifer Crumbley as well as their son. Smith first addressed questions about the Crumbley's knowledge of their son's social media usage, which was part of the evidence that Wagrowski had collected during the investigation.

Neither Jennifer nor James were aware of Ethan's other Instagram accounts, where disturbing comments were left on posts. The other accounts also had various posts of photos of ghosts and other mysterious figures. 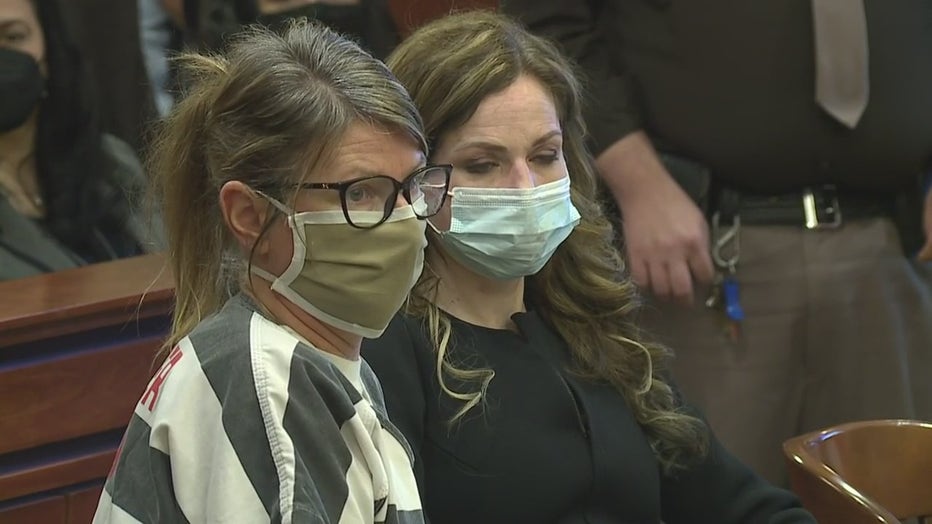 Among the texts that Smith brought up were messages about Ethan saying he's going to talk to a doctor about hallucinations he's having and voices he's hearing. Ethan eventually said "I only told them about the people I saw."

Conversations between Ethan and juvenile friend also show the two discussing a firearm, but also other topics. The bulk of the electronic evidence pulled from Ethan's phone revolved around discussions with his friend.

Those same discussions were part of the prosecutor's questions for Wagrowski. During various text message conversations, Ethan tells his friend he is worried about his mental state. He talks about his dark side.

He also mentioned times he tried bringing up issues he was having to his dad and asking to go to the doctor. The prosecutor said texts from Ethan showed James Crumbley gave his son some pills and told him to ‘suck it up' instead.

Ethan also told his friend about mental breakdowns he was having.

Cammy Beck was the next witness called to the stand. The manager of the gun shop where James Crumbley purchased the firearm allegedly used in the shooting. Beck testified that James filled out a form that said it was illegal to be purchasing a firearm for someone else.

She also confirmed the weapon comes with a trigger lock.

When she first spoke with James, he already had a gun picked out for purchase. She described a young male with shaggy hair was with James at the time.

The third witness of the day was Shawn Hopkins, the guidance counselor at Oxford High School who called a meeting between Ethan and his parents after becoming concerned for the teen's wellbeing. In the months prior, Hopkins said he had little interaction with Ethan.

He was called to a meeting on Nov. 29 to serve as emotional support for Ethan, following a report that teachers had seen him searching ammunition on phone.  He described his demeanor as 'calm, complaint, understanding."

He also testified that he was in the room when the office coordinator that called the meeting left a voicemail for Jennifer Crumbley.

The next day, Hopkins received an email about a video that Ethan had been watching. He clarified he never saw the video that was referenced. Around the same time, the Oxford dean of students told Hopkins he had received an image of Ethan's math assignment, which depicted bloody images and disturbing words.

He then pulled Ethan out of class, told him he wanted to talk and took his math assignment from the desk.

In the meeting, Hopkins testified that Ethan originally said he wanted to design video games and the drawings were for that purpose. But when Hopkins pressed Ethan on some of the phrases that had been written, including ‘my life is useless’, the teen's demeanor changed.

"He became sad. He started passing more in his speech. Then he described some things that had happened in his life," said Hopkins.

The family dog had recently died, Ethan said. A grandparent had also died. Covid had made school very difficult. A longtime friend had also moved away. He had also had an argument about grades with his parents the night before.

"At this point, I determined there was enough suicide ideation based on his sadness and his words that I called mom," Hopkins said.

Suicide ideation, Hopkins explained, were thoughts, patterns, and feelings associated with a suicide. It is not the same as being actively suicidal, which would include a method or plan.

The meeting that Hopkins had with Ethan and his parents wasn't like other meetings he had called with students, the witness testified. James and Jennifer Crumbely ‘weren’t friendly or showing care to the student." He confirmed they didn't greet him or touch him.

After explaining his concerns, he provided a sheet of mental health services before strongly recommending Ethan get treatment as soon as they could, ‘today if possible.’ But the Crumbley parents said they had to work, which is why Hopkins said that he should get treatment within 48 hours.

Hopkins testified James mentioned to his son that he "had people he could talk to" as well as a journal to write in. The meeting lasted about 15 minutes and after the dean said there was need for discipline.

In the clip, Ethan can be seen firing his handgun multiple times, as well as Jennifer messing with the firearm as well.

After the clip, two sheriff's deputies from Oakland County testified. Both collected evidence and took photos of the Crumbley's home.

Det. Adam Stoyek, a 10-year veteran of the sheriff's office, testified that after he responded to the school, he and a partner with to 112 East Street. In the master bedroom, Stoyek, said he observed an open handgun box with an empty box used for 9 mm ammunition. The unlocked box used clasps to close and didn't have any other locking mechanism.

Detectives also found another gun box that had the code "000." When the detective opened it, he found a 22 caliber Derringer and a 22 caliber Cal Tech hand gun. Both were unloaded.

The lockbox for a Cal Tech handgun was found in the kitchen,, however, no firearm was inside.

Sgt. Matthew Peschke, who has worked for approximately 20 years with the sheriff's office, had taken photos of Ethan's bedroom. Shell casings were found in a dish next to the bed. Another photo taken from the scene showed a notebook with pictures of a ‘rifle style’ gun and and another handgun with an extended magazine.

Folding knives were found in the rooms well.

Timothy Willis, a 25-year veteran with the sheriff's office took the stand next. As the officer in charge in the investigation, he delegated where police would go and how to conduct the process.

He found Ethan's backpack in the bathroom that the teen walked into before he started shooting other students. In the backpack was Ethan's journal, where at least 21 pages of writing and drawings all reference plans to commit a mass shooting.

On one page, there were big letters that read "forgive me." On another page, dated Nov. 29, he explains that he got access to a Sig Sauer 9mm hand gun and that "the shooting is tomorrow I have access to the gun and ammo."

Another page shows a severed bird head and a picture of a demon. More pages reference shooting a "pretty girl" so she could "suffer like me." On another page, it reads "I have fully mentally lost it after years of fighting with my dark side. My parents won't listen to me about help or a therapist."

On other pages, he talks about how he hopes his parents can forgive him. No where does it indicate that either parent is aware of the plans.

Both the prosecutor and the defense rested their case in terms of witnesses for the preliminary exam.

What is a preliminary exam?

A preliminary exam is when a judge will hear evidence presented by the prosecution. This includes documents, physical evidence, and witness testimony.

The prosecution presents the evidence but, according to FOX 2's Charlie Langton, this is actually a hearing that's used by the defense to find out what evidence the prosecution has and how well the witnesses will testify at trial, assuming it goes to trial.

The judge then decides what evidence will be allowed and if the suspects are bound over for trial.

Most cases are bound over and Langton said he fully expects James and Jennifer to be sent to trial.

What are James and Jennifer Crumbley charged with?

The parents of Ethan Crumbley were each charged with four counts of involuntary manslaughter days after their son was arrested for allegedly shooting several people at Oxford High School on Nov. 30. Four students died in the shooting and 7 others were seriously hurt.

The parents were both found early in the morning on Dec. 4 inside of art studio in Detroit, one day after they were supposed to have turned themselves in to the Oakland County Sheriff.

After their arrest, they each were ordered held on a $500,000 bond. Their defense attorneys argued for a reduction in bond to $100,000, but it was rejected.

The judge in the case ruled that the parents were flight risks, citing their actions on the day they were charged with involuntary manslaughter.

James Crumbley tries to mouth message to Jennifer in court

James Crumbley appeared to get a message to his wife, Jennifer Crumbley, as they were in Oakland County court for involuntary manslaughter charges related to the Oxford High School shooting.