A federal judge ordered Monday that an independent special master be appointed to review the records seized by the FBI during its raid of former President Trump's Mar-a-Lago home and ordered the Justice Department stop its own review of the material for investigative purposes. U.S. District Judge from the Southern District of Florida Judge Aileen M. Cannon ordered that the special master be appointed to "review the seized property, manage assertions of privilege and make recommendations thereon, and evaluate claims for return of property."

WASHINGTON (AP) - In a legal victory for former President Donald Trump, a federal judge on Monday granted his request for a special master to review documents seized by the FBI from his Florida home and temporarily halted the Justice Department’s use of the records for investigative purposes.

The decision by U.S. District Judge Aileen Cannon authorizes an outside legal expert to review the records taken during the Aug. 8 search and to weed out from the rest of the investigation any that might be protected by claims of attorney-client privilege or executive privilege. Some of those records may ultimately be returned to Trump, but the judge put off a ruling on that question.

The order came despite the strenuous objections of the Justice Department, which said a special master was not necessary in part because officials had already completed their review of potentially privileged documents. The department said Monday that it was reviewing the decision but did not indicate if and when it might appeal.

The order almost certainly slows the pace of the department’s investigation into the presence of top-secret information at Mar-a-Lago, particularly given the judge’s directive that the Justice Department may not for the moment use any of the seized materials as part of its investigation into the storage of government secrets at the Florida property. The injunction is in place until the yet-to-be-named special master completes his or her work, or until "further court order."

"The Court is mindful that restraints on criminal prosecutions are disfavored, but finds that these unprecedented circumstances call for a brief pause to allow for neutral, third-party review to ensure a just process with adequate safeguards," Cannon, a Trump appointee, wrote in her 24-page order.

Even so, it is not clear that the decision will present a long-term impediment to the investigation's progress or significantly affect investigative decisions or the ultimate outcome of the probe. And a separate assessment by the U.S. intelligence community of the risk posed by the apparent mishandling of classified records will continue under the judge's order.

"While this is a victory for the former President, it is by no means an overwhelming win for him," David Weinstein, a Florida criminal defense lawyer and former Justice Department prosecutor, said in an email. "While it is a setback for the government, it is also not a devastating loss for them."

He noted, for instance, that the judge did not immediately order the seized documents returned to Trump or suppress any of the evidence.

Justice Department spokesman Anthony Coley said Monday that "the United States is examining the opinion and will consider appropriate next steps in the ongoing litigation." A lawyer for Trump did not respond to a request for comment.

The department and Trump's lawyers are to submit by Friday a list of proposed special master candidates.

FBI agents in August seized roughly 11,000 documents and 1,800 other items from Mar-a-Lago as part of a criminal investigation into the retention of national defense information there, as well as into efforts to obstruct the probe. About 100 of the documents contained classification markings. 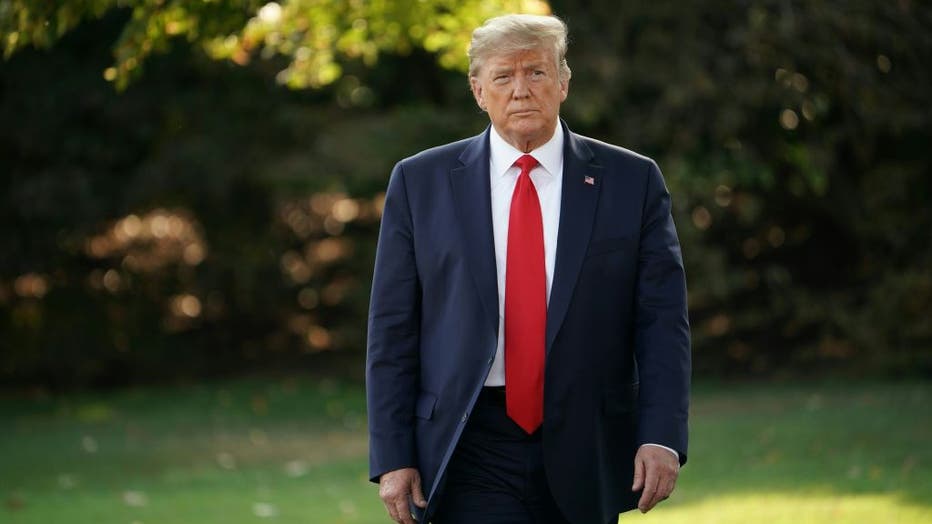 US President Donald Trump comes out of the Oval Office for his departure from the White House on September 16, 2019 in Washington, DC. (Photo by Mandel Ngan / AFP via Getty Images)

Trump’s lawyers had argued that a special master, usually an outside lawyer or former judge, was necessary to ensure an independent review of records taken during the search and so that any personal information or documents could be filtered out and returned to Trump.

In this case, the seized records "include medical documents, correspondence related to taxes, and accounting information," the judge's order said.

Cannon said it was too soon to know whether Trump will be entitled to the return of any of the records, but "for now, the circumstances surrounding the seizure in this case and the associated need for adequate procedural safeguards are sufficiently compelling to at least get Plaintiff past the courthouse doors."

She also said she found persuasive his lawyers' arguments that he faced potentially "irreparable injury" by being denied access to records that might be of significant personal interest to him. She said the investigative process had, so far, been "closed off" to him.

"As a function of Plaintiff’s former position as President of the United States, the stigma associated with the subject seizure is in a league of its own," Cannon wrote. "A future indictment, based to any degree on property that ought to be returned, would result in reputational harm of a decidedly different order of magnitude."

The Justice Department had argued against the appointment, saying it was unnecessary because it had already reviewed potentially privileged documents and identified a limited subset that could be covered by attorney-client privilege.

The department had been using a separate "privilege review team" for that work, but Cannon cited at least two instances in which members of the investigative team were "exposed" to potentially privileged material, something she said raised questions about the adequacy of the process.

The department had also said Trump was not entitled to the return of any of the presidential records that were taken since he is no longer president and the documents therefore do not belong to him. And personal items that were recovered were commingled with classified information, giving them potential evidentiary value, the department said.

Though prosecutors had argued that Trump, as a former president, had no legal basis to assert executive privilege over the documents, the judge said he was entitled to raise it as a concern and permitted the special master to look for records that might be covered by that privilege.

"The major sticking point, I think, is that the executive privilege documents were included" in the judge’s decision, said Florida criminal defense lawyer Richard Serafini, a former Justice Department prosecutor.

Cannon, who was nominated by Trump in 2020, had signaled last month that she was inclined to appoint a special master and did so again during arguments last week, asking at one point, "Ultimately, what is the harm in the appointment of a special master to sort through these issues without creating undue delay?"