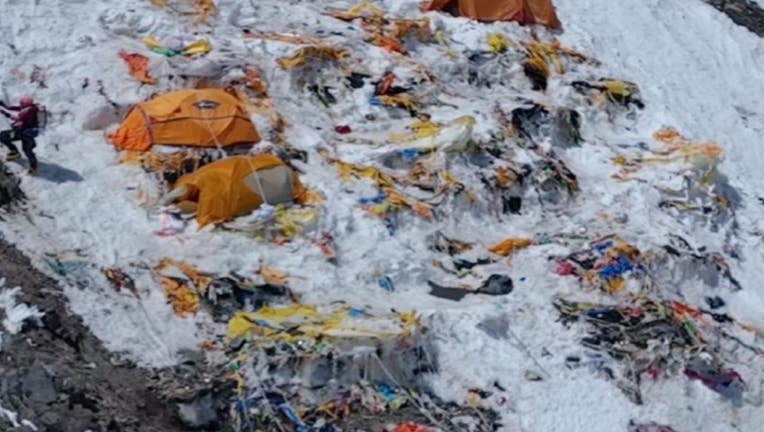 The "rubbish is an accumulation of nearly 70 years – since the first mountain ascents," Purja says. (Nimsdai Foundation/Instagram)

The foundation of elite mountain climber Nirmal Purja has announced it is bringing a team to Pakistan's K2 next year to clean up "rotting food and human waste" that is "frozen into the ice and leaching into the groundwater."

The Nimsdai Foundation wrote on Instagram that the "rubbish on K2 at Camp 2 was so bad this year, our Founder @nimsdai nearly threw up from the smell." The mountain in Pakistan is 28,252 feet tall – the second highest in the world only behind Mount Everest.

"It’s time for action... we are announcing our new project to tackle this disgusting waste pile at K2. We are proud to say that together with our founder @Nimsdai, the Foundation is planning our next #BigMountainCleanup project – returning to K2 next year with a bigger team to clean," 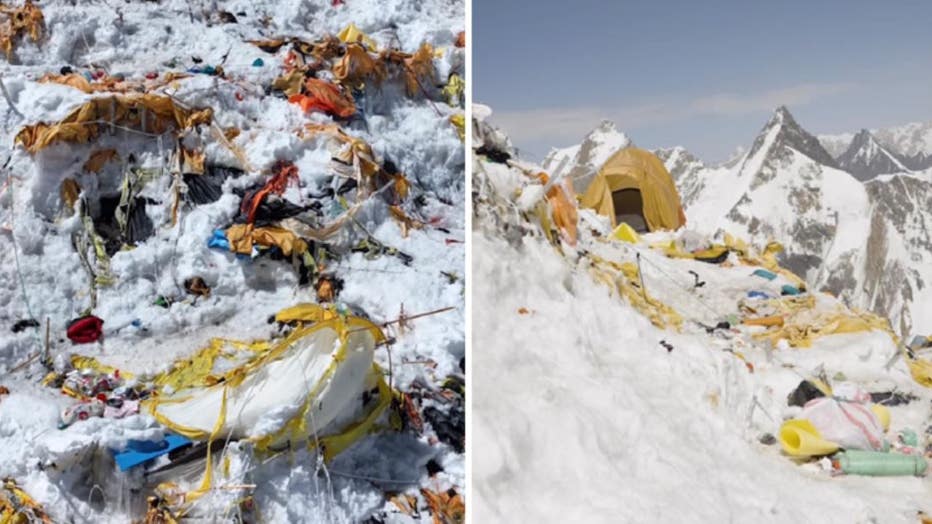 This split image shows trash that has accumulated on K2 in Pakistan, the second-tallest mountain in the world. (Nimsdai Foundation/Instagram)

"Next year we want to have a team of Sherpa who will have the job of cleaning full time and removing old, used and dangerous ropes," the post added. "This will be a challenging and expensive project because of the remoteness of K2 and because we will have to pay for permits and full-time wages for those Sherpas working with us, (who will need to be compensated really well for what will essentially be them missing the K2 climbing season.)"

In a separate post, Purja – a 39-year-old who became the subject of a Netflix documentary after setting a record in 2019 for climbing the world's 14 highest peaks in record time – said "one thing people need to understand is often people don’t want, or mean to litter – it really can be a case of life and death at that altitude.

"If a climber is ill or struggling, they need to get down the mountains asap – they may die if they stay to pick up their gear," he continued. "It’s a very different situation to sea level – due to the lack of oxygen. Obviously, those climbers that can bring down rubbish, 100% should."

The Nimsdai Foundation says on its website that it was established "as a means of giving back to the mountain communities" of Purja’s homeland, Nepal, in addition to "helping guide the way for the climbers of the future.

Purja also said "bad weather can wreck tents and gear left at higher camps for expeditions to use – which gets sealed into the ice.

"This rubbish is an accumulation of nearly 70 years – since the first mountain ascents," he added. "It’s not just one season’s worth – it will take time to remove as it’s so ingrained in the ice. Cleaning at high altitude is very tough and labor intensive."