Beer, liquor, and wine -- it's fine to have a good time at the Waste Management Phoenix Open, but police also have a program there, so that people won't get behind the wheel after having too good of a time. FOX 10's Anita Roman reports.

SCOTTSDALE, Ariz. - Beer, liquor, and wine -- it's fine to have a good time at the Waste Management Phoenix Open.

"I will be here all day, so at least 8-9 drinks, but again, all day," Raymond Corpuz said.

Golf fans like Corpuz heading into the Waste Management Phoenix Open know they will enjoy several drinks and that's why they think it's a good idea Scottsdale police is keeping an eye on spectators as they leave the event.

"Good idea, absolutely, I mean a lot of crazies come here every year, so you know, anything to keep the roads safe to keep people safe. It’s a great idea," Corpuz said.

"The 'Know Your Limits' program was started in 2012 and what it is based on is an educational program," said Scottsdale Police Officer Steve Hash said. "We want to get a hold of people before they make a poor decision to get behind the wheel of a vehicle when there are so many options available -- like Uber, Lyft, taxis, call a friend -- anything simple,"

Corpuz was nice enough to demonstrate how it works. 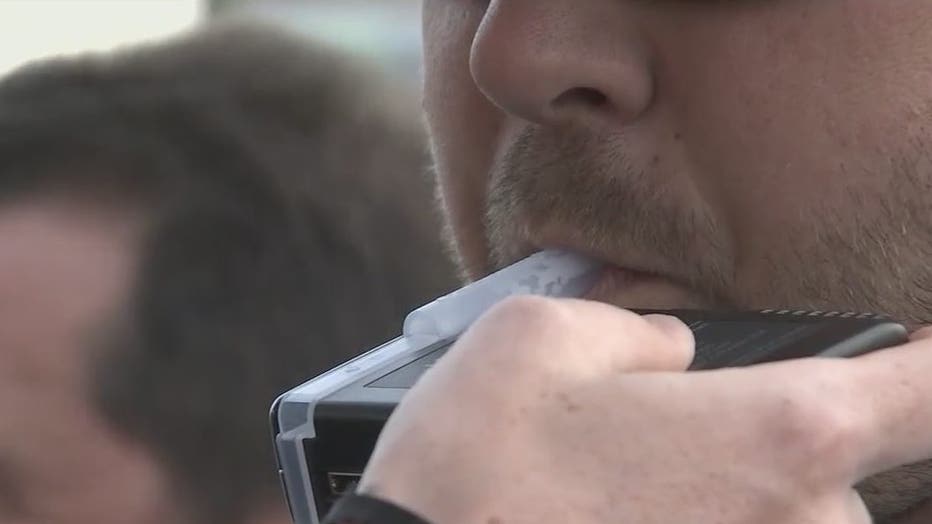 "What this is it’s a preliminary breath test. All I require you to do is take a deep breath. I'm going to have you wrap your lips around the straw, blow steady for me until I tell you to stop," said Officer Hash.

Scottsdale police has a tent set up so when people leave they can test their blood-alcohol level.

"Last year, we contacted about 13,000 people -- a little over that -- which is great because every year that we do it more and more, people show up, they wanna interact with us and they want to know where they’re at," Officer Hash said.

"It’s the atmosphere right on a personal level," Corpuz said. "You have your limit, but I think in an atmosphere like this, I think most people say no limit."

Scottsdale police say this is all voluntary. There are no repercussions for those who do stop the take the breathalyzer.