PHOENIX - A Maricopa County judge has placed a temporary pause on the Arizona Senate's election audit at Veterans Memorial Coliseum until Monday at noon, stressing that the recount needed to "comply in all respects with Arizona law."

The order becomes effective at 5 p.m. on April 23, and Arizona Democrats will have pay $1 million to fund any potential increase in costs.

The judge's decision comes after reports that proper procedures were not being followed, including the usage of blue ink pens to mark ballots - only red pens are allowed to be used in the ballot audit, as blue and black ink can be read and accepted by tabulation machines.

The audit, including a hand recount of 2.1 million ballot, is being conducted on behalf of Republicans in the state Senate, who have hired a cybersecurity firm with no election experience owned by a man who shared unfounded allegations of election fraud on his since-deleted Twitter account.

Democrats did not immediately say whether they’d put up the money. Maricopa County judge Christopher Coury said all auditing activities should be stopped between 5 p.m. Friday and noon Monday, saying he wants to know the policies in procedures in place so he can decide next week whether the auditors are operating legally.

A lawyer for the Senate, Kory Langhofer, had asked that any halt be delayed so he could immediately appeal.

The Arizona Democratic Party and the sole Democrat on the Maricopa County Board of Supervisors had filed a lawsuit Thursday seeking to block the Arizona Senate’s ballot recount and audit of the county’s 2020 election.

Maricopa County Supervisor Steve Gallardo filed a joint lawsuit and injunction on April 22 against Arizona State Senate President Karen Fann in an effort to stop the audit, saying he is trying to "protect the sanctity of the ballots and preserve voters' privacy."

Lawsuit filed to stop audit of 2020 election in Maricopa County

The lawsuit was filed by Maricopa County Supervisor Steve Gallardo, who says he wants to protect the sanctity of the ballots and preserve voters' privacy.

The last-ditch lawsuit alleges Republican Senate President Karen Fann and another GOP senator promised a judge that they would protect the secrecy of the ballots and voter privacy before he ruled the Senate could access 2.1 million voted ballots and the tabulation machines used to count them. A court hearing is set for Friday morning.

But the lawsuit alleges that Fann and Sen. Warren Peterson’s assurances were "illusory" because they’ve outsourced the recount set to begin Friday to an "inexperienced third party with clear bias."

The lawsuit says the audit’s lack of transparency and safeguards will cause "irreparable harm to the integrity of Arizona’s election systems" and the privacy and confidentiality that Arizona law promises voters who cast a ballot and entrust election officials with it.

Besides Fann and Peterson, the lawsuit names Ken Bennett, the former Arizona secretary of state who is acting as a liaison between the Senate and the contractors, and Cyber Ninjas. That’s the firm that is leading the audit and led by Doug Logan, a backer of unfounded theories that contend former President Donald Trump lost in Arizona and other battleground states because of election fraud.

The county handed over the ballots Thursday to Logan’s team at the state fairgrounds, which the Senate rented after the Republican-dominated board of supervisors refused to allow use of its facilities.

The audit, which is set to take place nearly six months after an election that saw then-President Donald Trump lose Arizona's electoral votes, is led by Arizona Senate Republicans.

Supporters of the ex-President have cast doubt on the Maricopa County election results since Biden’s narrow win, but there has been no evidence of widespread fraud. Judges rejected several lawsuits alleging irregularities in the count.

The Republican-dominated Maricopa County Board of Supervisors denied use of their facilities after losing a court fight set off by a Senate subpoena for the election materials. They insist the election Biden won was conducted fairly and counted accurately. Senate Democrats oppose the effort to recount the ballots of the long-ago certified election and are not participating.

Audit being conducted at State Fairgrounds

The county announced it would deliver the materials over two days because of the volume involved. The Senate will use the Veterans Memorial Coliseum, former home of Phoenix Suns NBA basketball team, to hold the election equipment and recount the 2.1 million 2020 ballots by hand.

The Senate will pay only for electricity and personnel at the Coliseum, which it rented starting Monday for four weeks. It also must provide security.

Senate President Karen Fann, who’s heading the audit, has not made herself available for questions.

"The president has said all along she’s going to make sure it’s a process that’s above board, that folks can follow along. I think she’s expecting it to begin later this week," says J.D. Mesnard, a Republican state senator.

Machines moved to Coliseum on April 21 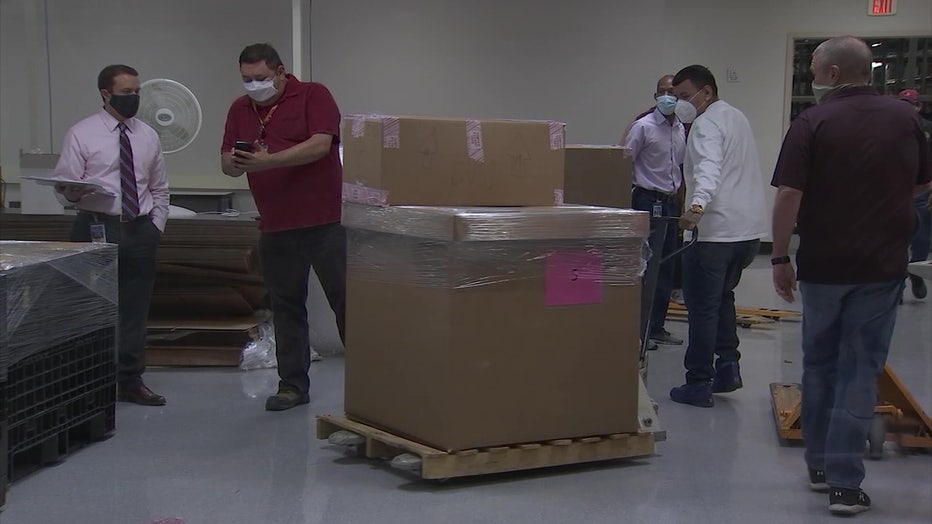 April 21 was moving day for the voting machines in Maricopa County, as they were moved to the audit site via a special process.

"The machines are very sensitive. You got to be real careful on how you package them," said Maricopa County Supervisor Steve Gallardo. "We had to bring out a team from California to assemble and box them."

Surrounded by deputies with the Maricopa County Sheriff's Office, moving trucks and crews transferred the equipment to the coliseum.

Arizona Senate Republicans ordered the audit in the aftermath of President Joe Biden's victory in Arizona in the November election. 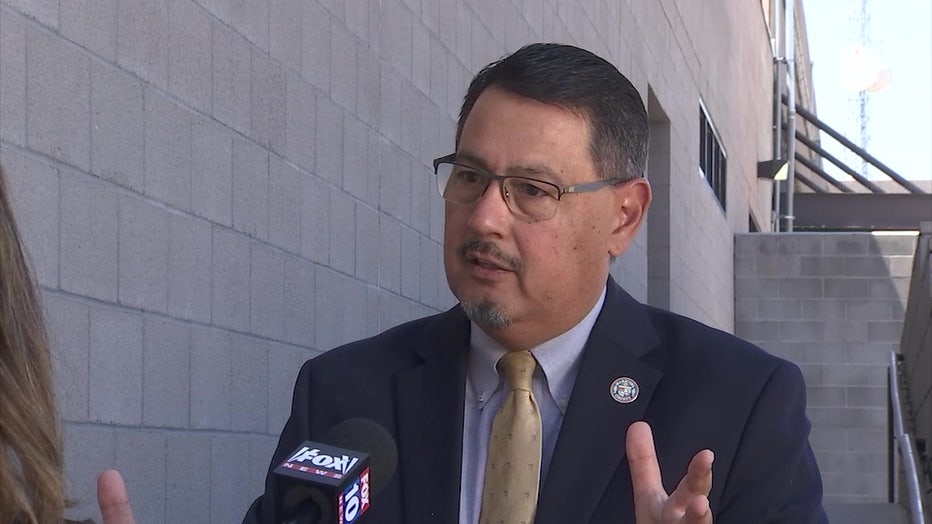 Maricopa County has agreed to comply with the Senate’s subpoena, but some supervisors are concerned about transparency and the experience of the auditors.

Supporters of former President Donald Trump have cast doubt on the Maricopa County election results since Biden’s narrow win last year. But there has been no evidence of widespread fraud. Judges rejected several lawsuits alleging irregularities in the count.

Last month, the county released the results of two new audits of its equipment that showed no malicious software or incorrect counting equipment and that none of the computers or equipment were connected to the internet.

Election administration and security experts said in a letter to Fann early this month that they were "deeply disturbed" by the decision to hire Cyber Ninjas for the audit. The election was conducted securely, and the audit could undermine confidence in U.S. elections, they said.

"Nobody should be taking this circus seriously," Hobbs said. "That’s what it is. It’s a circus."

Hobbs said Senate Republicans have shown they’re not interested in "real independent results" and hired a biased firm with no auditing experience that has pre-determined the outcome.

"It is, again, continuing to perpetuate the big lie for their own political agenda," Hobbs said. "It is going to do nothing to restore anyone’s confidence in our election system."

It is unclear how long it will take to recount all the ballots. It took 33 bipartisan teams a day and a half to do a hand count of about 8,500 ballots after the election, according to Megan Gilbertson, spokeswoman for the county elections department.

Ken Bennett, a former Arizona secretary of state who is acting as GOP Senate President Karen Fann’s liaison overseeing the audit process, said security will be tight. Options for reporters to cover the actual event are in flux, with Bennett giving varying versions of openness over the past week.

"There's a company called Wake Technologies that hand counts ballots in other states. They will be the primary subcontracting on not only hand-counting, but re-tabulating the ballots as well," said Bennett.

Another company involved in the audit, hired by Fann, is Florida-based Cyber Ninjas. Its CEO appeared to have promoted election conspiracy theories from a now-deleted Twitter account.

Bennett in a recent interview vowed to ensure that the audit is as fair as possible, despite concerns that Cyber Ninjas founder Doug Logan has embraced Trump and expressed doubt that Biden won.

In late March, FOX 10 reported on tweets that appeared to be made by Cyber Ninjas CEO Doug Logan. According to an archive of what appears to be Logan’s Twitter account, he used hashtags and shared memes popular with people promoting disproven or unsupported allegations casting doubt on Biden’s victory. 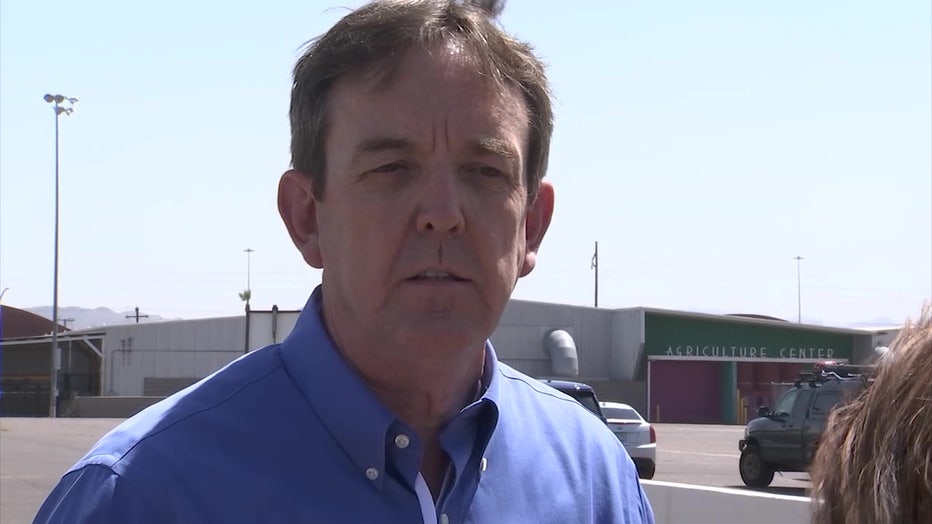 He said that in addition to the recount, the auditors will review mail ballot signatures, the tabulation machines and that bipartisan observers will watch the whole process.

"I think what matters is the product they put out and whether we can all look at it and say they followed the right way to do this," senator J.D. Mesnard said, adding, "If he doesn’t find any fraud, what better person than someone who believed there was fraud coming and saying, 'Hey, I’m not finding any in Arizona.'"

Gallardo is skeptical of the operation, and questioned the experience of the auditors.

"They're going to look at this huge machine and say, 'where do I start?'" said Gallardo. "They have no idea what they’re dealing with. They have no experience with the election."

It has been reported that Cyber Ninjas CEO Doug Logan appeared to have promoted election conspiracy theories from a now-deleted Twitter account.

On April 22, Logan defended his company on the eve of the audit, as well as talking about how the auditing process will work.

First, the recruiting pool comes from three groups: law enforcement, veterans, and retirees. Officials say there is a mix of Republicans, Democrats, and independents, but they did not answer the question as to whether there will be a Democrat on each counting team.

In addition, there will be three people at each station scanning each ballot, and there is a camera above each table to record the process, but not broadcast it. At least two of the three counters will have to approve the count in order to move on.

It should also be noted that only the President and U.S. Senate races will be counted. When asked why other races are not being counted, officials say it is too voluminous, and there's not enough time.

"There's a lot of Americans, myself included, that are really bothered by the way our country is being ripped apart right now. We want a transparent audit so people can trust results and get on the same page. If we go through here and don't find fraud, I'll be ecstatic. I'm going to love that, and I want to be able to tell people that. If we go through here and find fraud, I want to fix it, so that our country and democracy works. I know you guys want to paint me as some bad guy here. I'm involved in this and putting everything on the line with my company, because I care about the country," Logan said.

Logan has previously said his personal views are irrelevant because he intends to conduct a transparent audit.

The coliseum is booked for the audit from April 19 until May 14, but Senate Republicans estimate it will be 2-3 months before the audit is completed.

The audit will be livestreamed for public viewing, and officials say there will be 24-7 private security inside and outside of the coliseum throughout the process.

The Senate is paying Cyber Ninjas $150,000, and a host with the right-wing news organization OANN helped raise at least another $150,000 for the effort.

The Senate will use the former Phoenix Suns arena to store election equipment and 2.1 million 2020 ballots.