One man made a major fumble at AT&T Stadium — but it wasn’t a football player this time. (Credit: @AdrianValdez24 via Storyful)

ARLINGTON, Texas - One person made a major fumble at AT&T Stadium — but it wasn’t a football player this time.

Niko Valdez traveled to Arlington with his girlfriend and their family for the annual Dallas Cowboys Thanksgiving game. But he wanted to make this game extra special.

"Approximately six months prior to the day, my son made plans to surprise his girlfriend and propose at AT&T Stadium when we went to the annual Cowboys Thanksgiving game," explained Adrian Valdez, Niko’s father. "Cowboys stadium is a special place as we are all Cowboys fans. We recently learned she was 10 weeks pregnant and got her to the stadium under the ruse of taking photos of them with a onesie announcing the new addition to the family." 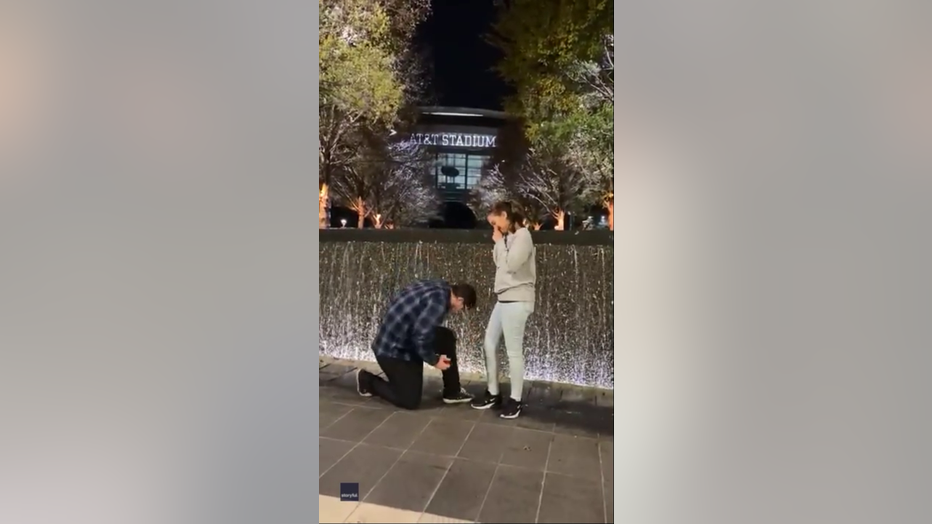 Adrian captured his son’s play on camera as it all went down, but Niko made a major fumble.

As he got down on one knee and opened the box, Niko dropped the ring.

"Are you serious?" a family member can be heard saying. "Did he really do that?"

Nico, Adrian and their family frantically searched for the engagement ring.

The Dallas Cowboys continue a 25-year tradition, kicking off The Salvation Army's Annual Red Kettle Campaign at halftime of the Thanksgiving game vs Las Vegas.

Fortunately, the team was able to make a fumble recovery and found the ring after a half-hour search.

In the end, the kick was good — Niko’s girlfriend said yes.