Cool temps today in the Valley with a high near 61°

Winter storm warnings or advisories remained in effect in many parts of Arizona and the National Weather Service said heavy snow was falling from Flagstaff to Heber.

In Nevada, higher-elevation outlying areas of metro Las Vegas got light snowfall on Jan. 26. Up to 1 inch (2.5 centimeters) was expected in some places before the storm was expected to taper off by midday, the National Weather Service said.

Interstate 17 northbound reopened at State Route 179 at 3:15 p.m. Tuesday. Earlier in the day, ADOT tweeted a video about the road conditions.

Other highways with partial closures as of Tuesday included SR 89 from Chino Valley to I-40 in northern Arizona and U.S. 80 in Bisbee in southeastern Arizona.

The Transportation Department urged drivers to postpone travel in the high country until the latest storm has passed and says those who do travel should be prepared for extended time on the road.

Preliminary snowfall reports from the latest storm included 14.2 inches (36 centimeters) at the Flagstaff airport and 16 inches (40.6 centimeters) at Payson between Sunday night and late Monday, the weather service said.

"Extreme winter conditions have resulted in very difficult driving conditions. ADOT continues to encourage drivers to postpone travel in the high country until the storm has passed and snowplows can finish plowing the roads. As temperatures drop overnight, roads will become icy and travel may be challenging.

Those who decide to travel in the storm should be prepared for an extended time on the road and use chains or 4-wheel drive. Remember to slow down, leave extra room behind the vehicle ahead of you, and pack an emergency kit containing a fully charged cell phone, warm clothing, blankets, food and water, medications and sand or kitty litter in case you get stuck in the snow."

The storm that passed through the Valley on January 26 left some damage in its wake.

The storm that came through Arizona on Jan. 25 has left some damage in its wake, including downed powerlines in a Northwest Valley neighborhood that left thousands of customers without electricity overnight.

"The power went out and we came here and it was mayhem. I’d never seen anything like this," said Scott Vanderlinden.

More than 27,000 APS customers in the Metro Phoenix area were without electricity for several hours at one point. Some residents even spent the night without power.

"Luckily, I got some dry firewood," said Vanderlinden. "I have a fireplace, and we were doing some glamping."

Meanwhile, an army of about 30 APS crew members worked around the clock. Power was restored to nearly all customers by the morning of Jan. 26. 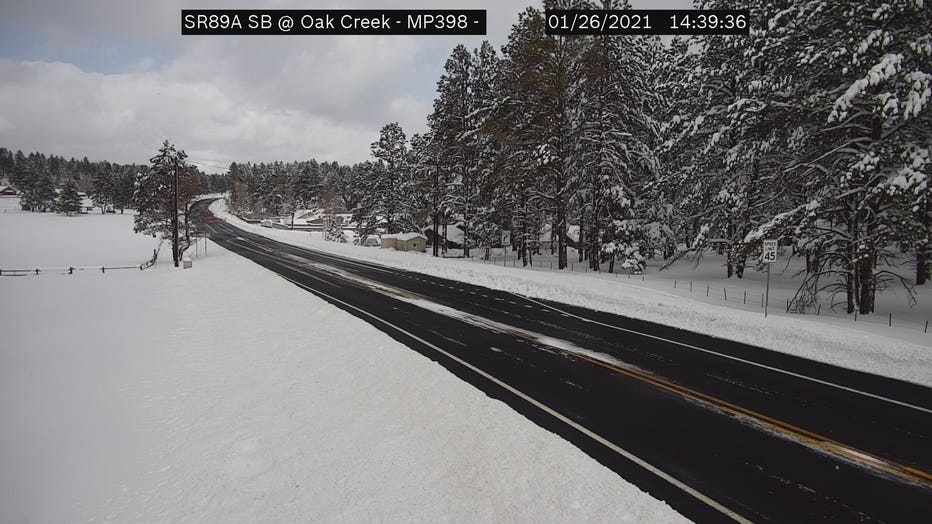 Residents of a Phoenix apartment complex first had a hazmat situation and shortly after, a tree fell over and knocked out their power on Jan. 25.

As a thunderstorm rolled through Arizona, thousands of residents were without power as two major electric suppliers experienced outages on Jan. 25.

The metro Phoenix area is seeing rain and hail, while northern Arizona has seen at least 7 to 9 inches of snow over the weekend.