Biden issued executive orders Jan. 28, 2021 on a range of issues including opening the sign-up window for health coverage to uninsured Americans.

WASHINGTON - A record 80.5 million Americans were receiving health insurance through Medicaid or the Children’s Health Insurance Program earlier this year amid the COVID-19 pandemic, according to new federal data shared this week.

Between February 2020 and January 2021, Medicaid enrollment jumped by 9.7 million people — or 15% — to an all-time high of nearly 74 million Americans, the report released Monday by the Centers for Medicare & Medicaid Services (CMS) showed.

Close to 124,000 children enrolled in CHIP during the same timeframe, an increase of 1.9%, resulting in nearly 6.8 million kids enrolled by January 2021. In total, 38.3 million children were covered by either Medicaid or CHIP, the data showed.

The federal agency said both Medicaid and CHIP serve as the largest single source of health coverage for Americans.

The record enrollment in both Medicaid and CHIP was attributed to the impact of the coronavirus public health emergency and specifically, the Families First Coronavirus Response Act passed by Congress in March 2020. It provided U.S. states with a temporary 6.2% payment increase to cover anticipated higher Medicare costs as long as the states kept eligible individuals enrolled in Medicaid throughout the public health emergency.

"This report reminds us what a critical program and rock Medicaid continues to be in giving tens of millions of children and adults access to care," Health and Human Services Secretary Xavier Becerra said in a statement. "This pandemic taught us that now more than ever, we must work to strengthen Medicaid and make it available whenever and wherever it’s needed using the unprecedented investments Congress provided." 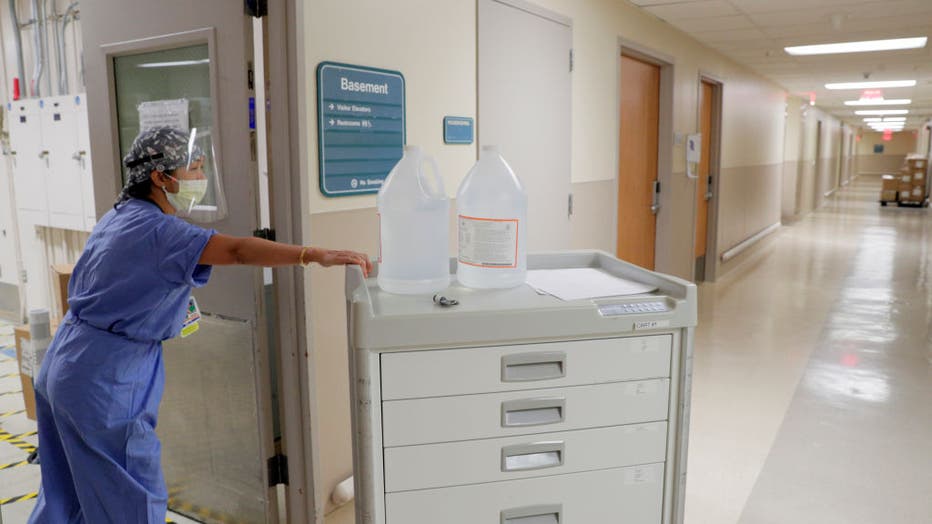 FILE - A dialysis nurse returns a cart to the dialysis unit supply room after using it to treat a patient in the ICU at Regional Medical Center in San Jose, Calif., on July 22, 2020. (Carlos Avila Gonzalez/The San Francisco Chronicle via Getty Images

Medicaid is government-run health coverage provided to people below a certain income threshold, and its expansion is a major cornerstone of the Affordable Care Act. Earlier this month, the Biden administration announced that 14.8 million adults had gained health care coverage through expanded Medicaid.

"The increase we are seeing is exactly how Medicaid works: the program steps in to support people and their families when times are tough," CMS Administrator Chiquita Brooks-LaSure said in the statement. "For the parents that may have lost a job or had another life change during the pandemic, having access to coverage for themselves and their kids is life-changing."

January’s Medicaid enrollment of 73,759,632 million Americans was the highest since the CMS began tracking enrollment data in its current form in 2013, according to the Washington Post. The outlet noted that, as a result, it doesn’t compare enrollment data to the last time the U.S. went through severe economic strain in late 2007 to mid-2009.

The Supreme Court dismissed a challenge to the Affordable Care Act, preserving insurance coverage for millions of Americans, in a 7-2 ruling on June 17, 2021.

The Affordable Care Act, also known as "Obamacare," is now undergoing an expansion under President Joe Biden, who sees it as the foundation for moving the U.S. to coverage for all. His giant COVID-19 relief bill significantly increased subsidies for private health plans offered through the ACA’s insurance markets, while also dangling higher federal payments before the states that have declined the law’s Medicaid expansion.

About 1.2 million people have signed up with HealthCare.gov since Biden reopened enrollment amid high levels of COVID cases earlier this year.