More cleanup underway at 'The Zone' in downtown Phoenix

PHOENIX - A second round of cleanup was underway on Jan. 4 in the downtown Phoenix homeless encampment known as "The Zone," following a federal lawsuit filed by the ACLU where a judge put restrictions on how the city conducts sweeps and handles personal property.

Arthur is among the hundreds who live on the streets of Phoenix, more specifically the area of 12th Avenue between Madison and Jefferson Streets. He says he's glad to be getting help.

"I think they're doing a great job, I mean, it's a slow start," he said. "We're just trying to make it. Jobs are scarce, but they're out here. The main thing is us doing our part."

At 7 a.m. on Wednesday morning, the City of Phoenix, Human Services Campus and Community Bridges (CBI) got to work.

"Waste and garbage accumulates – it can cause health and safety concerns," said Scott Hall, deputy director for the Office of Homeless Solutions for the City of Phoenix. "As stuff accumulates, [it] starts blocking [the] right of way and sidewalks. We want to start mitigating that, but ultimately what we wanna do is offer services to people and the engagement opportunity. We have out here during the cleanup is great."

Hall says on Dec. 16 during Phase 1 of cleanup, 33 people who were contacted accepted services. Hall says most are moving forward in their plan.

"We will debrief after this and talk about steps, while we also continue to add resources," he said. "The city has added over 500 beds this year – we plan on adding over 700 beds in [the] coming year, so as we create more shelter capacity, we continue to work on placing people, while also trying to create housing options for people move on to."

After cleanup is complete, everyone will be able to return to the area, but if they're interested in seeking a shelter option, staff will be able to help transport them to an available indoor location.

Hours after a court ruling, officials with the City of Phoenix conducted cleanup efforts at homeless encampment known as 'The Zone' in Central Phoenix.

A federal judge has imposed a number of restrictions on Phoenix city officials in relation to the resumption of homeless encampment sweeps.

Man behind unauthorized dinosaur sculptures near 'The Zone' uncovered

It looks like a dinosaur invasion of sorts, as two sculptures of the famous extinct animal showed up in a part of Phoenix that has been blighted by a homelessness problem. The problem is; the sculptures aren't supposed to be there. 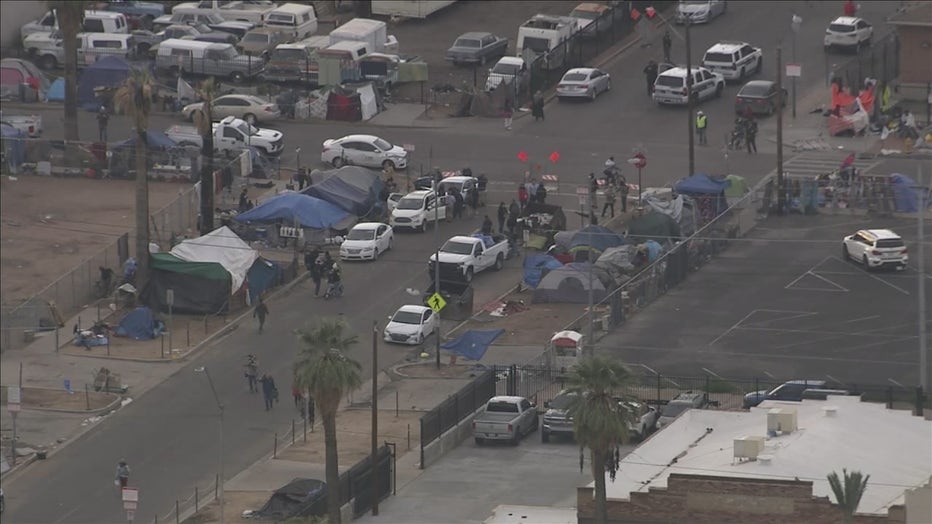 More cleanup was underway on Jan. 4 in the downtown Phoenix homeless encampment known as "The Zone."