The city of Phoenix is continuing their sweep of a massive homeless encampment near the Arizona State Capitol. FOX 10's Irene Snyder has more.

PHOENIX (AP) - A federal judge has imposed a number of restrictions on the City of Phoenix as authorities are set to conduct sweeps on a massive homeless encampment downtown.

According to court documents provided by the ACLU of Arizona, Chief U.S. District Judge G. Murray Snow wrote that while the order does not prevent the city from conducting its enhanced cleanup plans in an area known as "The Zone," city officials are now preliminarily banned from the following:

However, the judge says the injunction does not stop the city from carrying out "enhanced cleanup plans" in "the Zone," the name given for the area where homeless often camp out.

In its complaint, the ACLU says the sweeps have displaced people and destroyed important belongings such as identification documents and prescription medications.

"Today’s ruling affirms the City must do more to protect the constitutional rights of the unsheltered community. The order makes it clear – the city of Phoenix can’t destroy people’s belongings or target them with criminal sanctions due to their unhoused status. Because of this injunction, unsheltered people won’t be at risk of losing essential belongings, receiving unconstitutional citations, and experiencing further trauma at the hands of the city and Phoenix PD," read a statement by ACLU of Arizona Senior Staff Attorney Benjamin Rundall.

The sweeps were paused at the beginning of this year. But officials previously have said they have taken strategies to combat homelessness, including dedicating nearly $50 million during the last fiscal year to shelters and other services. The city added 592 new beds to homeless shelters this year.

ACLU Arizona officials say they will sue the City of Phoenix in order to block sweeps of a big homeless encampment near the city's downtown area. FOX 10's Lauren Clark reports.

The ACLU of Arizona originally said filed the complaint in a move to halt the city's possible resumption of homeless sweeps that were paused at the beginning of 2022.

"Rather than confront its housing crisis head-on and invest in sustainable solutions to homelessness, the City is terrorizing the very people it should be helping," the complaint says.

The complaint was the latest move in an ongoing tug-of-war between advocates and cities in Western states over how best to tackle the problem of homelessness.

Previously, the city of Phoenix conducted sweeps three times a week, dispatching city workers accompanied by police officers, often in the predawn hours without warning. Many people have said that they lost paperwork, medicine and other belongings — even the cremated remains of a loved one — because they weren't nearby or couldn't rescue their things in time.

The city of Phoenix earlier argued that the sweeps were done to protect the health and safety of people living in the camp.

Earlier this year, a group of business owners and residential neighbors of the encampment known as "The Zone" filed a lawsuit against the city, asking Phoenix to declare the site a public nuisance. The city moved to dismiss that action, saying it doesn't have a constitutional duty to protect the property of those suing.

Street homelessness has increasingly come under fire from politicians and housed residents in many cities in West states. California Gov. Gavin Newsom, a Democrat and former mayor of San Francisco, has embraced clearing tent encampments, saying it is neither compassionate nor safe to allow people to live outdoors.

But the Ninth Circuit Court of Appeals ruled in 2018 that it’s unconstitutional to cite or arrest people for sleeping in public when there is no shelter available.

The sweeps are also common and controversial in California, where the nation's largest homeless population was estimated as 161,000 in 2020.

In late September, homeless people and their advocates in San Francisco sued the city, demanding that it stop harassing and destroying the belongings of people living on the streets.

In a notable case last year in Los Angeles, a big encampment that expanded during the pandemic was removed overnight from a park near downtown. It sparked a huge March 2021 protest that resulted in the arrest of more than 180 people, including two independent journalists.

Meanwhile, three neighborhood groups recently balked at joining some others in signing a "good neighborhood agreement" with the city of Albuquerque, New Mexico, saying they want to first know the possible effects of a new 50-bed shelter for homeless women.

In California, Newsom has paused $1 billion of the state's budget going to local governments, saying local plans to combat homelessness are insufficient, and that he seeks to reset the state's approach ahead of his second term in office. 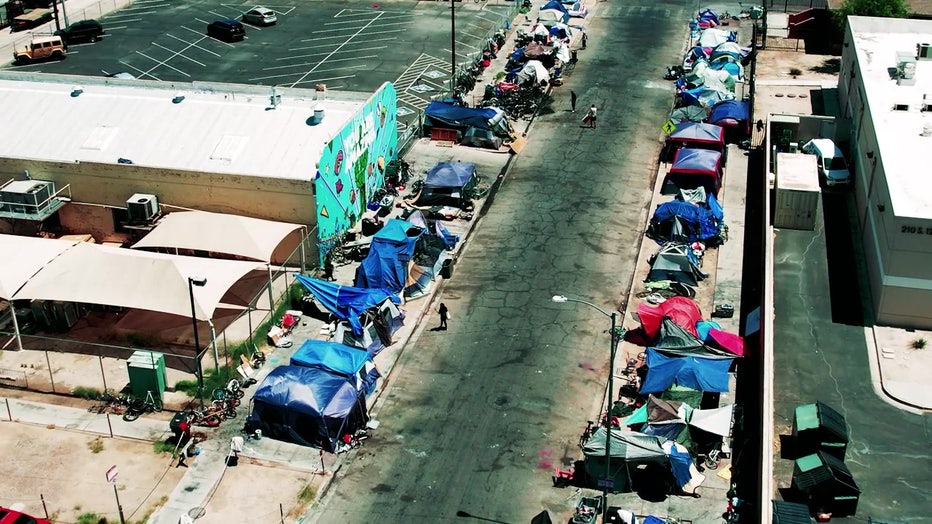