The Scottsdale Police Department shut down roads for planned march Sunday at 5 p.m. where more than 1,000 people showed up.

SCOTTSDALE, Ariz. - The Scottsdale Police Department shut down roads for planned march Sunday at 5 p.m. where more than 1,000 people showed up.

The march is in response to the deaths of George Floyd and Arizona man, Dion Johnson. 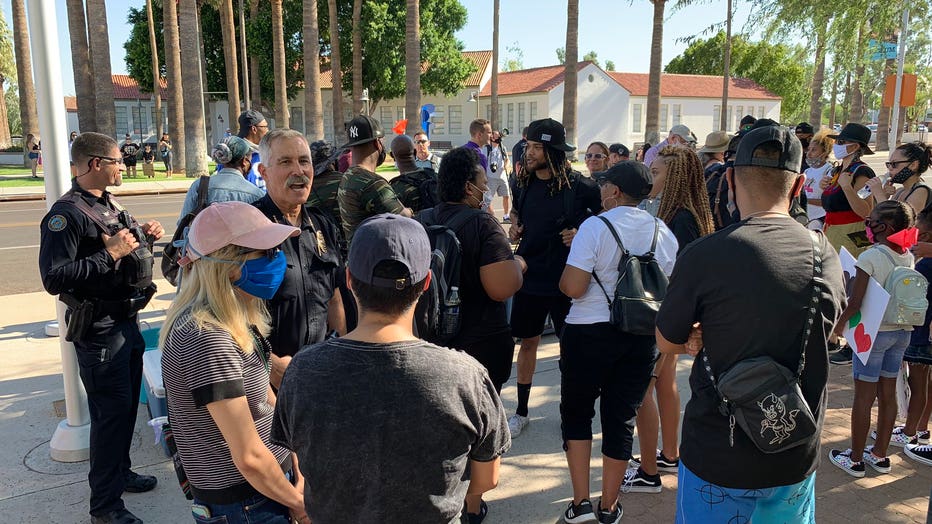 Sunday's marchers want it to be known this is a peaceful protest and they simply want to march as one with the message for racial equality and police reform.

Armonee Jackson is the president of the Arizona NAACP Youth and College Division. Since leading a peaceful protest in downtown Phoenix last Sunday, her name has been all over social media and she's only 22 years old.

“We all know that Scottsdale is the 'Baby of Arizona,' especially for Governor Ducey, so I want to bring my constituents out there to show that we can protest peacefully for the things that we hold near and dear to our heart, which is our black community," Jackson explained.

The first African American Police Chaplain for the Apache Junction Police Department, Pastor Andre Miller, has worked with the Arizona Police Association behind the scenes for policy reform.

He says young people are crucial to making change.

Another theme in the protest was diversity.

The Director of the American Indian Movement Central Arizona Chapter says he stands proud with the black community.

“A lot of minorities have their doors closed in front of them so this right here, for a lot of people, not just black people, Hispanics Asians, the LGBTQ communities, it’s opening doors to a lot of people that have been held down," Alvin Bitsui said.

Scottsdale Police Chief Alan Rodbell marched with the group and spoke with protesters, another step toward peace in the valley.

Police in Phoenix said no arrests were made in connection to protests on Sunday night.