The footage, posted to Twitter by Karina Montanez on November 3, shows a maskless Ricketts with a group of people at DJ’s Dugout in Bellevue, Omaha. (Credit: Karina Montanez via Storyful)

A Nebraska woman was fired this week after posting video that showed Gov. Pete Ricketts maskless amid the coronavirus pandemic, celebrating on Election Night at the bar where the woman worked.

Now, she’s seeking donations on the internet to help pay her bills.

“Since I just got fired for posting this tweet, if anyone would like to donate to this lovely single mama, I’ll be posting my venmo and cashapp shortly,” the woman, using the Twitter handle Keezyoko, wrote Tuesday, according to the Lincoln Journal Star.

Both Venmo and Cashapp are mobile payment sites.

The woman was later identified as Karina Montanez, 25, a former employee of DJ’s Dugout, a sports bar near Omaha, according to The Daily Beast.

Montanez told the outlet she saw Ricketts, the state’s Republican governor, celebrating at the bar with a group of women – with only one person wearing a mask. So Montanez said she decided to shoot the video on her cellphone.

At one point, Ricketts is seen in the video taking hold of an infant from one of the women, just after wiping his own nose.

“I was completely disgusted,” Montanez told The Daily Beast. “I have medical conditions that cause me to be high risk if I were to get COVID. So seeing Ricketts come in like he was a celebrity really rubbed me the wrong way. … I don’t understand why it’s so hard for him to understand what he’s doing is hypocrisy and puts everyone at risk.” 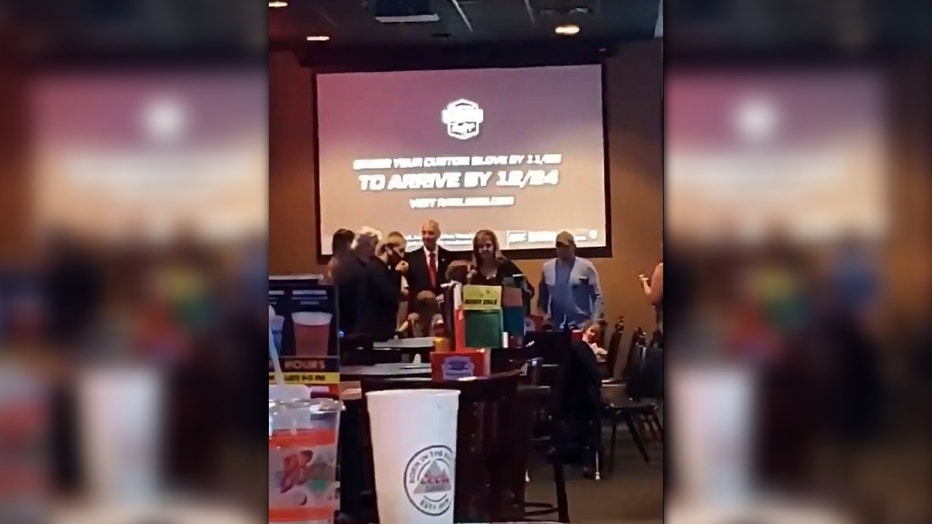 The footage, posted to Twitter by Karina Montanez on November 3, shows a maskless Ricketts with a group of people at DJ’s Dugout in Bellevue, Omaha. (Credit: Karina Montanez via Storyful)

Ricketts was celebrating an election victory by state Sen.-elect Rita Sanders at the bar, the Journal Star reported.

The bar’s rules don’t require patrons to wear masks while seated for eating and drinking, the newspaper reported.

On the video, audio of Montanez is captured, in which she says, “Where’s your mask, Pete? What are you doing, Pete? We’re in a pandemic, Pete.”

Darwin Hanssen, president of DJ’s Dugout, told the newspaper that Montanez was fired because she recorded the video during her work shift, in violation of the bar’s policies regarding employee use of social media and cellphones while on duty.

Just days after the election, Ricketts announced that he would be in self-quarantine after coming in contact with someone who tested positive for the coronavirus at a small dinner in his home. He and his wife were expected to remain in quarantine until Sunday, the Journal Star reported.

Ricketts has repeatedly urged Nebraska residents to avoid what he has called “the three C’s” – crowded spaces, close contacts and confined spaces, according to The Daily Beast. But the outlet noted he has not called for a statewide mask mandate.

Dr. Angela Hewitt, an infectious disease expert at the University of Nebraska, called indoor settings such as bars and restaurants “a risky situation,” according to The Daily Beast.

“It has been shown that COVID-19 can be transmitted easily in indoor settings, especially when distance cannot be maintained,” Hewitt told the outlet. “The larger the gathering, the more likely that someone in the group will be infected, even if they have no symptoms.”

As of early Thursday, Nebraska had nearly 104,000 confirmed cases of the coronavirus and had seen more than 800 deaths. More than 1.1 million tests had been performed in the state, with a positivity rate of 8.79%, according to Johns Hopkins University.