Union endorsements from Nevada, the third voting event of the 2020 presidential primaries, play a key role as a stacked pool of candidates face off.

LAS VEGAS - Union endorsements from Nevada, the third voting event of the 2020 presidential primaries, play a key role as a stacked pool of candidates face off.

The all-important Nevada caucuses are set to take place Feb. 22, which is the third contest in line after Iowa.

Nevada is one of several states where union support is essential for getting votes.

In 2018, union members accounted for roughly 14% of wage and salary workers in the state.

The biggest union by far is the Culinary Workers Union, which represents cooks, bartenders, food servers and other casino workers. Its roster boasts 60,000 members — and their endorsement is highly coveted. 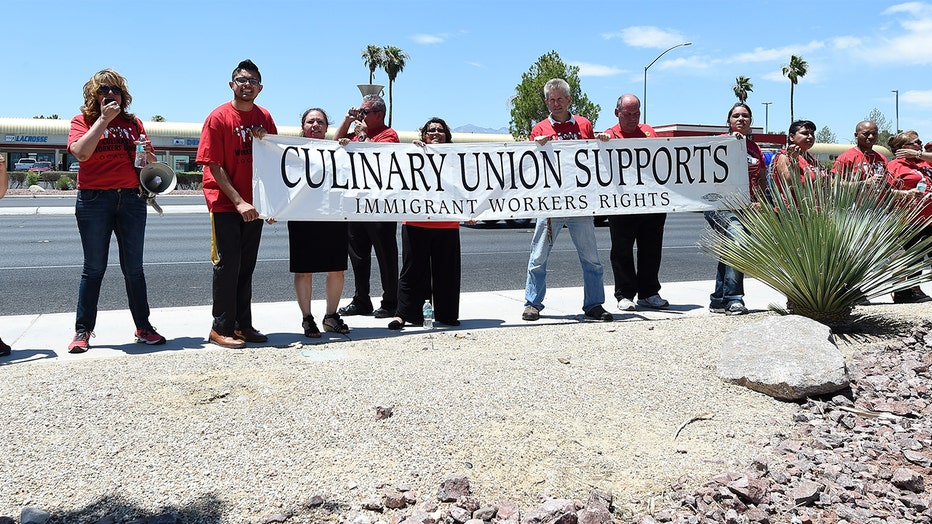 “If you get one of those unions to go out and knock on doors for you, considering how close some of this might be that is a really big deal for a campaign,” said Matt Littman, a campaign strategist.

It made a huge difference in amassing delegates when Barack Obama was running for president in 2008 and also helped put Nevada Sen. Harry Reid over the top when he was facing a tight re-election race in 2010.

Former Maryland Congressman John Delaney is the son of an electrician and saw for himself the role unions played for working class families.

“I saw first hand what happens when a labor union works together to fight for health care, fair pay and in my case my dad’s union paid for half of my tuition in Columbia University,” Delaney said.

Nevada is more racially diverse than the two states that weigh in earlier, Iowa and New Hampshire. Its population is young, working class, largely urban and increasingly leaning toward blue. Nevada looks like America, its boosters like to say.

Polls show former Vice President Joe Biden has a slight lead, with Sens. Elizabeth Warren and Bernie Sanders close behind. In one divergence from Iowa, South Bend, Indiana, Mayor Pete Buttigieg has trailed further back, struggling to crack double digits, but his campaign was slower to build out.

“For whatever reason, it just doesn’t seem to be anybody’s picking up traction other than the big three: Warren, Biden and Bernie,” said Mark Stufflebeam, the president of the Democratic Club in the Las Vegas suburb of Henderson.

Those candidates will be trying to shake up that dynamic as they head to the state to court one of the most powerful political forces in the state, the casino workers’ Culinary Workers Union.

The 60,000-member union hasn’t said if it will endorse a candidate, but the town halls it is hosting this week will help the group decide. If the union does endorse and chooses early enough to help organize, the largely female and largely Latino group can offer candidates critical reach into communities of color.

This year, the Culinary Workers Union is focused on health care and keeping the plan they have. With concerns over proposals for Medicare-for-all, they’re asking candidates directly where they stand on issues related to health care.

The union, mostly made up of Hispanics and women, is described as the largest immigrant organization in the state.

Nevada’s population — 29% Latino, 10% black, 10% Asian American or Pacific Islander — closely mirrors that of the U.S. as a whole and provides the first test of a candidate’s appeal to a broad group. By contrast, Iowa is 85% white.

“Nevada is small but mighty and has a history of playing really pivotal roles in the contests,” said Zac Petkanas, a Democratic strategist and former Hillary Clinton campaign aide.

Laura Martin, the executive director of Nevada progressive group PLAN Action, said the strong organizing teams that Buttigieg, Warren and Sanders have set up are critical to winning.