Phoenix Police Officer Alicia Hubert addressed the media for the first time on Thursday after being released from the hospital. Officer Hubert was shot while responding to a domestic violence call in Phoenix. Commander Greg Carnicle was killed in the shooting.

PHOENIX - The Phoenix Police Department announced the passing of one of their own after three of their officers were shot Sunday.

Two other officers, identified as Alicia Hubert and Marissa Dowhan, were taken to the hospital as a result. Hubert has since been released from the hospital and spoke for the first time since the shooting.

Dowhan was released from the hospital on April 5 after being hospitalized with serious injuries.

"Commander Greg Carnicle was shot in the line of duty on Sunday, March 29 on the scene of a domestic violence call. Two other officers were also shot during the incident at 40th Drive and Pinnacle Peak. The two officers are expected to recover," the department announced in a Facebook post.

CLICK HERE TO DONATE IN HONOR OF COMMANDER GREG CARNICLE

Carnicle leaves behind a wife and four adult children. The family issued a statement on Monday, which reads:

“There are literally no words that can properly convey the incredible man our husband and father was. He was a selfless man who was always there for a neighbor, a friend, his brothers in blue, but mostly his family. He dedicatd his life to serve, protect, provide for, and love us. He was truly our hero and always will be. He touched many lives and many hearts have now been broken. We are beyond thankful for our community. We appreciate the outpouring of kind words and we hear your prayers. We know he will live on through the character and love he built in our family. We are strong because of him and we will do our best to live to the fullest to honor him.”

Gov. Doug Ducey has ordered all flags at state buildings to be lowered to half-staff on Monday to honor Commander Carnicle. 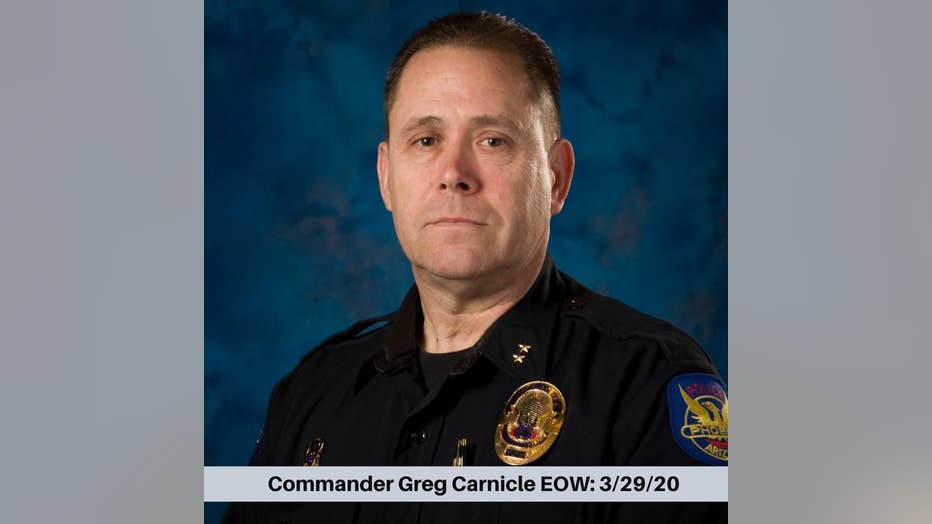 The other officers, identified as Marissa Dowhan and Alicia Huber, were seriously injured but are expected to recover.

Police say 22-year-old Jacob Emry Mcilveen was armed when confronted by officers and was shot. He was pronounced dead at the scene.

Commander Greg Carnicle was shot in the line of duty while responding to a domestic violence call Sunday night.

The Phoenix Police Department announced the passing of one of their own when three of their officers were shot Sunday.

Phoenix Mayor Kate Gallego released a statement on the shooting.

Governor Doug Ducey and several others released statements as well.

The Phoenix Police Foundation has started a fundraiser for Carnicle.