The suspect ran to the school where he carjacked the teenage girl at knifepoint. The girl was not seriously injured.

PHOENIX - Police are searching for a suspect who they say carjacked a 17-year-old girl at knifepoint in the parking lot of a Phoenix elementary school.

According to police, the incident started on April 20 in a neighborhood near 21st Avenue and Cactus Road. Police received reports of a person sleeping inside a truck and when officers arrived at the scene, the suspect drove towards officers before crashing into a fence.

He hit a police cruiser but didn't injure the officer.

Police say the suspect then ran to the school administrative office where he carjacked the teenage girl at knifepoint.

Sgt. Maggie Cox with Phoenix Police says the teen was bringing items for her elementary-aged sibling. Police say she gave him her keys and got minor injuries.

The vehicle that the suspect stole is a white 2003 Toyota Avalon with the license plate ATA5DWA. 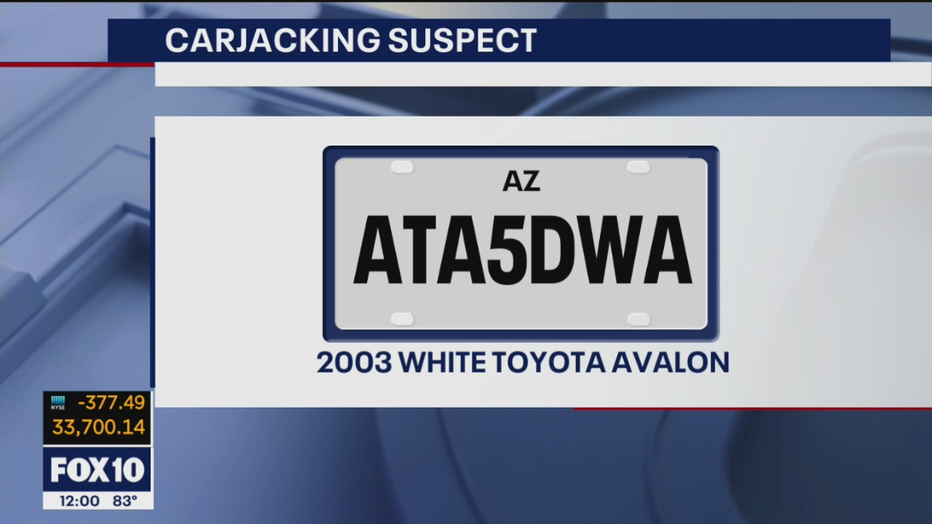 "So we went to make contact, just trying to identify the driver. The driver, we're not sure why he didn’t want to speak with police, but in that initial contact is when the vehicle was rammed there was damage to a structure in the front yard and then he fled," said Sgt. Maggie Cox with Phoenix Police.

She says the driver ran and the female passenger stayed behind and spoke with authorities.

"The victim did give those keys and we hope to get the vehicle, but the main thing here is personal safety and human life over property," Cox says.