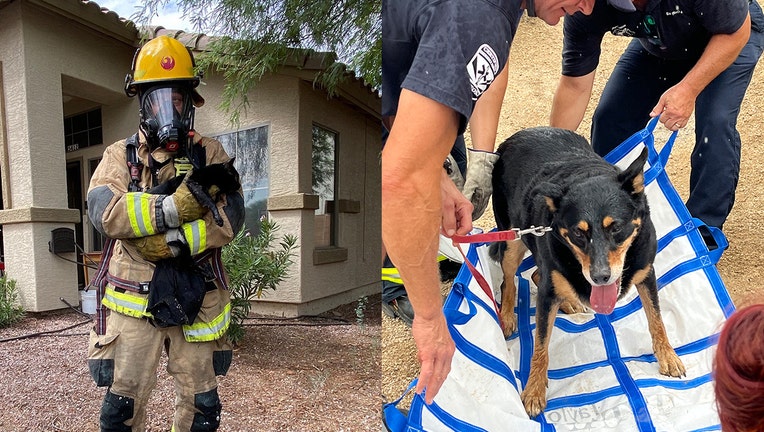 Cat rescued in Phoenix and a dog was rescued from a hiking trail in Scottsdale.

MARICOPA COUNTY, Ariz. - First responders in Phoenix and Scottsdale have been busy coming to the aid of animals in need recently.

Over in Phoenix, two cats were rescued from a house that caught fire, and in Scottsdale, a dog became overheated while on a hike with his owner.

A fire broke out at a home in south Phoenix near 16th Street and Broadway Road on Tuesday, Sept. 20.

Firefighters responded to reports of a house fire and once they got there, they found heavy smoke and flames coming out of the home.

Two cats were rescued, they're OK, and have been reunited with their owner.

In Scottsdale on Wednesday, Sept. 21, Scottsdale firefighters responded to a call at Tom's Thumb trailhead around 1:30 p.m. and a woman nearly at the end of the trail was found with two dogs.

"The large dog pictured was showing signs of heat exhaustion. Scottsdale Paramedics started cooling and rehydration for the dog named ‘Diego.’ He is a 125 lbs German Shepard. Crews carried him down a steep part of the trail and removed the hiker and the dogs utilizing an UTV," Scottsdale Fire said.

Diego had five bottles of water, and he's doing good.

Scottsdale Fire says dogs can die from the desert heat and provided tips to keep them safe when taking them on adventures.

The department also listed out what not to do.