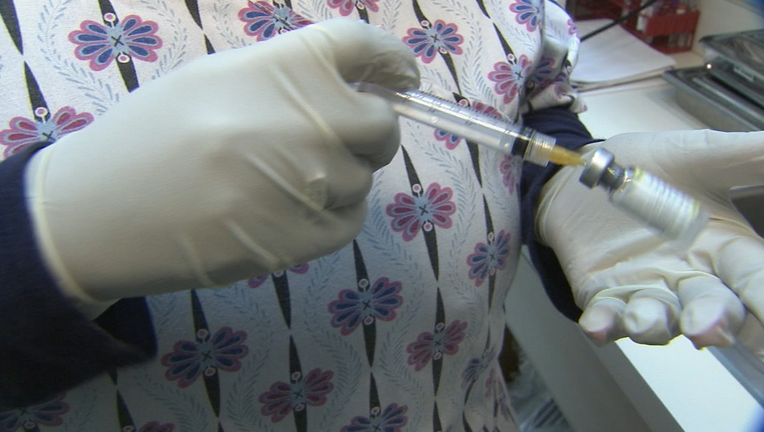 NEW YORK (AP) -- It may soon be easier for preteens to get the vaccine against cervical cancer. A government panel is recommending they get fewer shots spaced further apart.

Since the HPV vaccine went on sale a decade ago, three doses have been needed. The panel decided Wednesday that two doses are enough.

"It will be simpler now for parents to get their kids the HPV vaccine series, and protect their kids from HPV cancers," said Dr. Nancy Messonnier of the Centers for Disease Control and Prevention.

The vaccine protects against human papillomavirus -- or HPV -- which can cause cervical cancer, certain other cancers and genital warts. It is commonly spread through sex and, in most cases, the virus doesn't cause any problems. But some infections gradually lead to cancer.

Health officials want kids to get HPV vaccinations at age 11 or 12, well before most first have sex and before they could be infected.

But less than one-third of 13-year-old U.S. boys and girls have gotten three doses. Busy parents have struggled with the old schedule, which called for three trips to the doctor within six months.

"I know people who say 'I can't do that. Why even start?'" said Cynthia Pellegrini, a March of Dimes official who sits on the panel.

Recent studies have shown two doses of the current HPV vaccine -- Gardasil 9 -- work just as well in kids ages 9 to 14. The Food and Drug Administration two weeks ago said it could be given in two doses.

What's more, two doses apparently work better when spaced six to 12 months apart. That means they could be given at annual checkups.

The Advisory Committee on Immunization Practices made the recommendation at a meeting in Atlanta. CDC officials usually adopt the panel's advice and send it to doctors and the public.

The vaccine was first recommended in 2006 for girls, and then for boys in 2011 -- partly to reduce the spread of HPV to girls.

Vaccination rates have risen very slowly, and health officials have lamented the underuse of a potent cancer prevention tool.

Too many doctors have been timid about promoting the shots, experts say. That's at least partly because some parents have worried the vaccination seems like they are greenlighting their kids to have sex.

But the onerous schedule sure didn't help. "I think it was the icing on the cake" for parents already hesitant about HPV shots, said Dr. William Schaffner, a vaccines expert at Vanderbilt University.

The panel is sticking to three doses for anyone who doesn't get their first shot until they turn 15. That's because they didn't have enough data on how well two doses worked in older kids.

Until recently, there were three HPV vaccines on the market. Now there's only one -- Merck & Co.'s Gardasil 9. This month, the company stopped selling an older version. GlaxoSmithKline phased out its vaccine, Cervarix, in the U.S. because of poor sales.