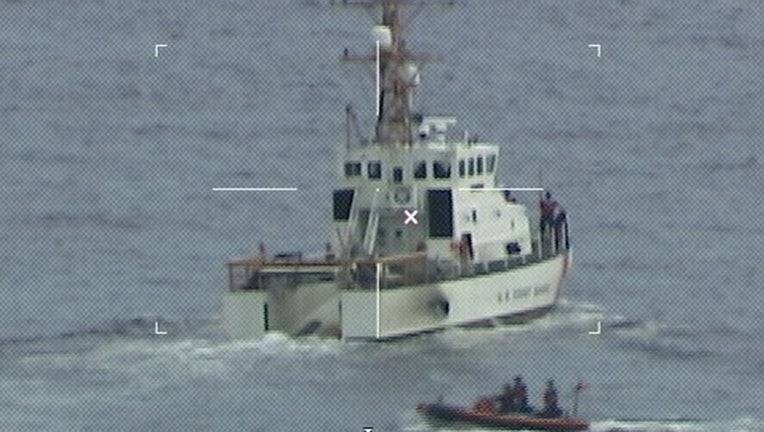 MIAMI (AP) - The sole survivor of a capsized boat found near Florida’s coast says at least 15 other migrants tried to cling to the overturned vessel but couldn’t hold on, some desperately tired and hungry when they let go.

Juan Esteban Montoya Caicedo, of Colombia, told a Spanish-language news conference in Fort Pierce, Florida that there was a baby girl and other children among the group of 40 that included Dominicans, Haitians, Bahamians, and Jamaicans. They set out for Florida from Bimini in the Bahamas on Jan. 22. His sister was part of the group but drowned, he said.

Authorities had said the boat capsized shortly after departing.

Montoya, 22, was seated next to his mother, Marcia Caicedo, as he spoke. He said the motor broke down in the early hours Sunday, and the boat was adrift in choppy seas for about four hours. He said he told his younger sister at that time to pray, prepare for the worst and hold onto the vessel.

But then a giant wave overturned the vessel and the two were separated.

"I managed to see her again. But as I went to her to help her, the rest of the people were grabbing her. Everybody was holding on to everybody. That’s why she drowned," he said.

A smaller group held on to the boat, but as hours passed, the group got smaller, Montoya said.

"What we were going through was so difficult, some people let go," he said. "The lack of food, the lack of water, and lack of rest affects you, and it led them to go that route."

Montoya said others still clung to the boat until Monday afternoon. It would be another day before his rescue.

"When I was left alone it was harder, much harder. My health was worsening, mentally I was suffering. Being alone was one more blow," he said. "But I did not lose hope."

Montoya spent two days holding onto the 25-foot (7.6-meter) boat before he was rescued last Tuesday. He said much of the time he was in the water holding onto the motor where he felt warmer, but the night before his rescue he had climbed up onto the overturned hull, where his image was captured by someone in a merchant vessel the day he was found.

Montoya said the two siblings were migrating, searching for a better life and safety. His attorney, Naimeh Salem, said he would apply for political asylum but said she could not reveal more details about his case.

He said they decided to try their luck at sea after looking on the Internet and finding groups that said it was easier to migrate that way than by land. A majority of migrants typically travel through Central America and Mexico to get to the U.S. border.

Authorities are investigating the disaster as a suspected human smuggling operation gone awry.

They still decided to get on the boat because they felt desperate to reach the U.S., he said. Montoya said he believes he managed to survive to be able to tell his parents what had happened to his sister.

"I hope that God has something very big for me since my heart is now broken," he said. "A part of me was taken."

The mother, Marcia Caicedo, lives in Houston, Texas. She said her daughter’s body has not been recovered, but she has stayed in touch with the U.S. Coast Guard, which suspended the search for the missing on Thursday after finding five bodies.

Caicedo said she wishes the search would have continued, adding that the pain of her loss just keeps growing and "the nights last forever."

"But here I am staying strong for my son," she said. "I will give him all the strength and support he needs."