College football fans are in for a treat this weekend for Week 3 with four games featuring ranked teams on FOX.

The action kicks off with Big Noon Saturday as Nebraska hosts no. 6 Oklahoma at noon ET. Then we head to the west coast for a matchup between no. 12 BYU and no. 25 Oregon at 3:30 p.m. ET. 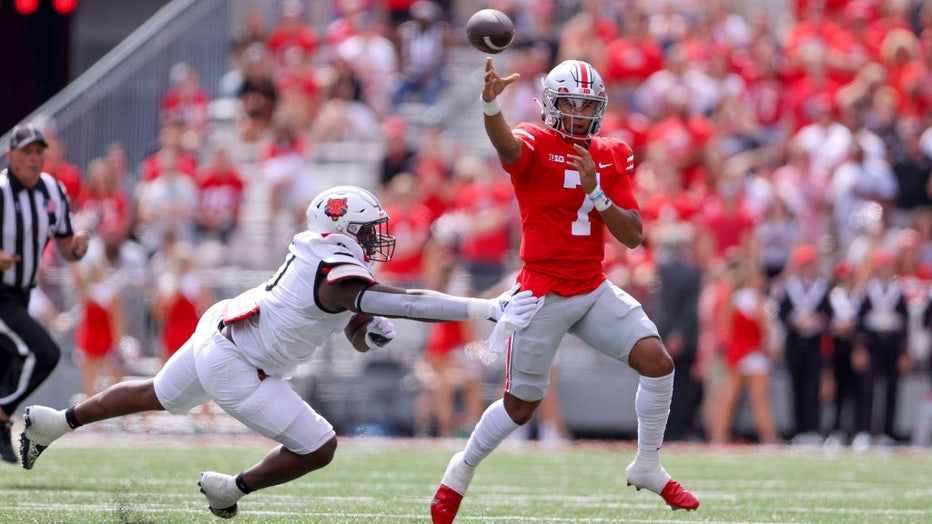 Nebraska vs. no. 6 Oklahoma

Sixth-ranked Oklahoma is the first opponent Mickey Joseph will face as Nebraska's interim head coach. The old Big Eight rivals meet Saturday in Lincoln, Nebraska. Joseph was put in charge of the Huskers following the firing of Scott Frost.

Oklahoma has won six of the last seven meetings, including last year's 23-16 win in Norman. Nebraska is looking to break an eight-game losing streak against FBS opponents.

Oklahoma quarterback Dillon Gabriel plays his first road game for the Sooners and he ranks in the top-10 in passer rating. Nebraska’s defense hasn’t generated a lot of sacks in there last couple of games, and if the trend continues, Gabriel is poised to have a huge game.

Nebraska QB Casey Thompson had a career day against the Sooners when he was with Texas last year, completing 20 of 34 passes for 388 yards and five touchdowns in a wild 55-48 loss.

BYU (2-0) is coming off a huge victory last week against Baylor. The win moves Cougars up nine spots to No. 12 in the AP Top 25. BYU quarterback Jaren Hall threw for 261 yards and a touchdown, and caught a 22-yard scoring pass from Chase Roberts, who also had a career-high 122 receiving yards and another score in their victory over Baylor.

Oregon (1-1) is coming off a 70-14 win at home over Eastern Washington last weekend. The rout helped the Ducks move on from its disappointing season-opening loss to Georgia.

Oregon and BYU have split their series 3-3. The last meeting between the two was in 2006 at the Las Vegas Bowl, a 38-8 victory for the Cougars.

Toledo vs. no. 3 Ohio State

Ohio State (2-0) gets one more chance to tune up against a non-conference team before starting its Big Ten schedule. The Buckeyes are favored to win their game against Toledo (2-0) Saturday night at Ohio Stadium.

The Rockets should give Ohio State a little more trouble than Arkansas State did last week. Toledo could be one of the best teams in the Mid-American Conference this year.

Toledo quarterback Dequan Finn rushed for 74 yards and two touchdowns last week while passing for 177 yards and another score. He is fast and elusive enough to take off and make gains on broken plays.

Quarterback Caleb Williams looks to remain unbeaten on the West Coast when the quarterback leads USC (2-0) back to the Coliseum on Saturday to face QB Jake Haener and the Bulldogs (1-1), who came agonizingly close to an upset of Oregon State last week.

Two elite passers could move their teams up and down the field all night in this matchup. Williams is in all the early conversations around the Heisman Trophy after passing for 590 yards and six touchdowns with no interceptions in his first two games at USC. Haener grew up rooting for USC in the Bay Area and was surprised when the Trojans didn't pursue him.

Fresno State hasn't beaten an opponent ranked as high as the No. 7 Trojans since 2001, but the Bulldogs have built a program with the respect of every top-tier opponent.