HARTFORD, Conn. - Kobe Bryant’s daughter, Gianna, was honored Monday at a University of Connecticut women’s basketball game — a school she one day dreamed of playing at herself.

The 13-year-old was killed Sunday in a devastating helicopter crash alongside her NBA champion father and seven others outside of Los Angeles.

The team’s Twitter account shared a photo of the bench, with one of the chairs symbolically reserved for Gianna with a No. 2 UConn jersey and a bouquet of flowers.

“Mambacita is forever a Husky,” the women’s basketball team wrote, in honor of the teen's nickname.

UConn played the U.S. women’s national team in an exhibition game at the XL Center, falling 79-64.

Kobe Bryant told the LA Times in 2019 that his daughter was “hell bent” on playing for UConn head coach Geno Auriemma, and one day for the WNBA.

“The first time they were at a game, you know the old saying, she was like a little kid, looking up at our players,” Auriemma told the Hartford Courant. “You could just see the look in her eyes. She was just so excited. Now imagine the absurdity of that. Your father is Kobe Bryant, and the most excited you’ve been in a long time is being around college women’s basketball players. But that’s what it meant to her. That is what she aspired to be.” 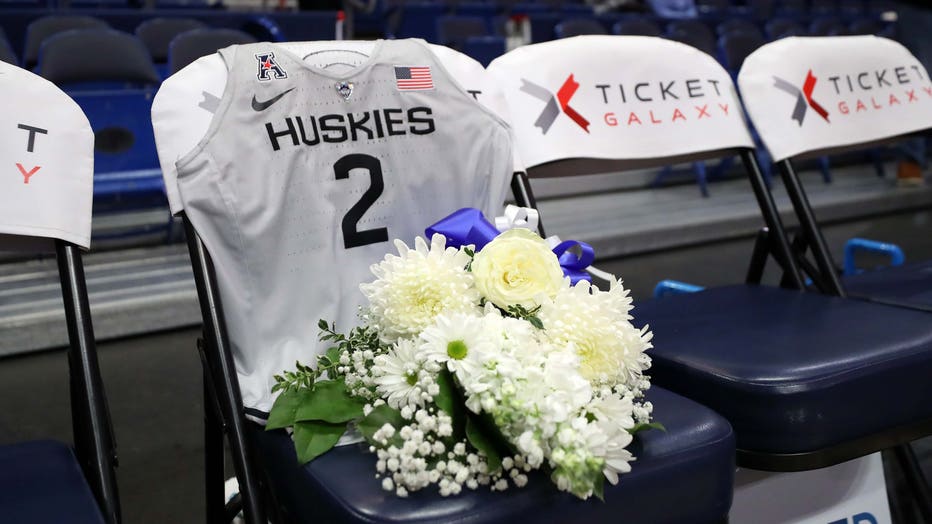 A jersey to honor Gianna Bryant sits on the UConn bench before the USA Women's National Team Winter Tour 2020 game between the United States and the UConn Huskies at The XL Center on Jan. 27, 2020 in Hartford, Connecticut. Bryant and her father, form

Both Kobe and Gianna Bryant were recognized before the start of Monday’s game with a picture of the father-daughter duo wearing UConn shirts shown on the scoreboard, according to the newspaper.

“Kobe was an inspiration to many of the people on the floor tonight and was an advocate for women’s basketball,” an announcement said, according to the Hartford Courant. “He did as much to grow the game, globally, as anyone in recent memory. He and Gianna were tremendous supporters of UConn, friends to both teams, and their untimely deaths leave us heartbroken.”

The announcement was followed by a 24-second moment of silence, in honor of the NBA champion's jersey number.

Bryant, 41, and the other passengers were heading to Bryant’s Mamba Sports Academy, a youth sports center in Thousand Oaks, at the time of the crash. The Los Angeles Lakers legend was to coach a basketball tournament in which Gianna and others were set to play.

RELATED: Man Kobe Bryant aided in 2018 car crash recounts NBA player’s kindness: ‘He was a legend of a human’