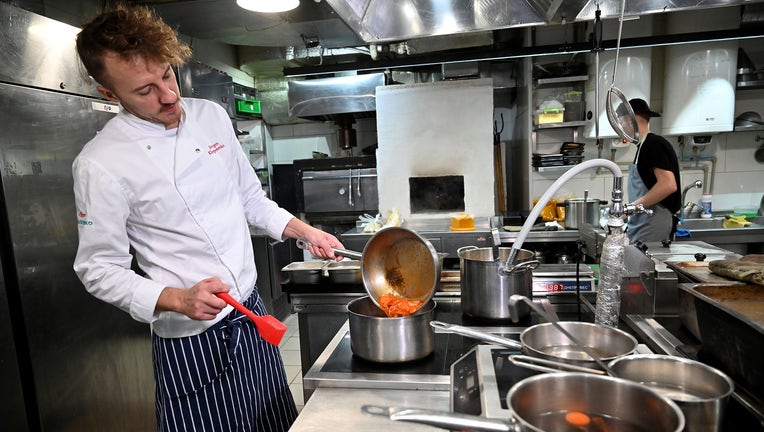 Ievgen Klopotenko, 33-year-old Ukrainian chef at Le Cordon Bleu culinary school graduate, cook borscht in his restaurant in the center of the Ukrainian capital of Kiev on November 25, 2020. (Photo by SERGEI SUPINSKY/AFP via Getty Images)

KYIV, Ukraine - A Ukrainian chef is taking matters into his own hands to aid his country's resistance in the war against Russia – by turning his restaurant into a bomb shelter to feed civilians fighting Russian forces.

Ievgen Klopotenko, who won Master Chef Ukraine, joined "Fox & Friends" Monday to discuss his efforts and how he is helping those fighting on the front lines to protect Ukraine's sovereignty.

"I want Ukraine to be Ukraine," Klopotenko told co-host Ainsley Earhardt. "I'm fighting for that already for eight year[s]… There's only one thing I can do. I should fight for my country.

For wounded Ukrainian soldiers away from home, they're anxiously watching their nation under attack and yearning to get back to defend it.

Despite many Ukrainians being concerned about running out of food, Klopotenko said he has contacted suppliers to help make sure he has sufficient supplies to feed those who are fighting.

"We don't have a problem for now, but it's only four days of war," Klopotenko said. "We will see what is going to be in a week, but for now, thanks God, everything okay."

The Russian invasion entered its fifth day on Monday as Russian and Ukrainian officials meet in Belarus for negotiations.

PUTIN PAINTED INTO A CORNER AS WORLD LEADERS, MAJOR COMPANIES AND EVEN SOME OF HIS PEOPLE TURN AGAINST HIM

The United Nations has estimated there have been well over 120,000 Ukrainian refugees that have already left the country seeking refuge in neighboring countries like Poland, Hungary, and Slovakia.

That number could climb up to four million people, they've warned.