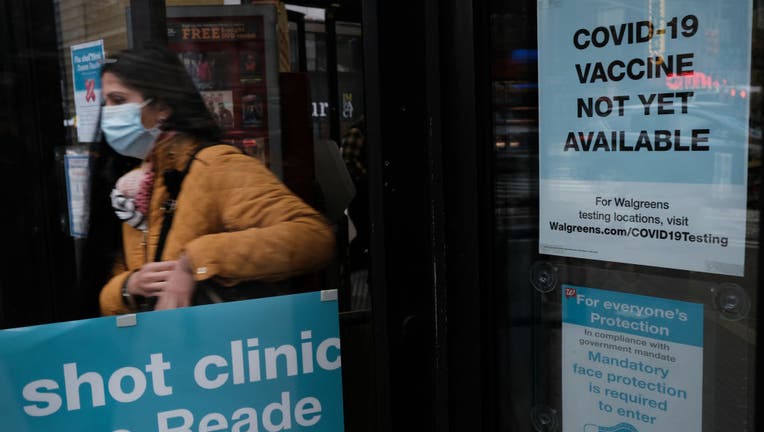 FILE - A woman walks out of a drugstore in Times Square as New York City tries to contain a spike in COVID-19 cases on November 15, 2020 in New York City. (Spencer Platt/Getty Images)

LOS ANGELES - The United States has hit yet another grim milestone with more than 11 million COVID-19 cases, according to Johns Hopkins data.

This comes less than a week after the U.S. surpassed 10 million positive cases. It took 300 days for the U.S. to hit the 11 million mark since the first case was diagnosed in Washington state on Jan. 20.

COVID-19 has now killed more than 246,000 people in the U.S., according to Johns Hopkins. Worldwide, more than 54 million coronavirus cases have been reported with more than 1.3 million deaths.

The U.S. has about 4% of the world’s population, but about a fifth of all reported cases.

RELATED: US surpasses 10 million COVID-19 cases, according to Johns Hopkins

This week, Pfizer announced that the COVID-19 vaccine they have been working on for months was more than 90 percent effective in trials.

President-elect Joe Biden's outreach to the vaccine manufacturers comes as the coronavirus pandemic in the U.S. has entered perhaps its most dangerous phase. The seven-day rolling average for new daily cases stood at 145,400 on Saturday, according to data from Johns Hopkins University. That means the U.S. is adding about 1 million new cases a week, and deaths averaged 820 a day as of Saturday, a 33% increase in just two weeks.

The disease is spreading faster across the country than at any time since the pandemic started and now it is believed that the impacts of in-person voting as well as poll workers being potential spreaders has been added to the mix, according to Johns Hopkins data.

With the idea that poll workers could be potential super spreaders, there have been calls for their co-workers to quarantine and voters to be tested as a precaution.

In New York, more than 1,600 people who voted at a site in the Hudson Valley on Election Day have been advised to get tested after a poll worker tested positive. Officials said colleagues who had sustained contact with the worker will be tested, but they described the risk to voters as minimal because the person wore a mask, kept distance and followed other safety measures.

It could be several weeks before the effect of in-person voting nationwide is known. Polling places that used safety measures could have greatly minimized transmission rates, perhaps making them less risky than going to a restaurant with friends, said M. Kumi Smith, an assistant professor with the epidemiology division at the University of Minnesota.

“A super-spreader event is a lot easier to identify when you’re still at an early stage of an epidemic or when there’s a really discrete event that’s really unlike anything else that anyone else is doing,” she said. "But given the real range of activities that are going on here, I would probably be a little bit more skeptical of someone who declares that this is definitively a super-spreading event.”

No major reports of safety lapses or risky voting conditions have emerged.