PHOENIX - Rainy weather did not appear to have negatively affected travel at Phoenix Sky Harbor Airport too much.

On Christmas Eve Tuesday, the airport was packed with people throughout the day, with everyone making it there just in time for Christmas.

Flying on Christmas Eve is not the most fun thing to do, but even with some delays and large crowds, people were feeling the Christmas spirit, with a little help from the airport itself.

"This is exciting," said one traveller, identified only as "Sandy". "I have everything done now, except putting money in the cards."

Phoenix Sky Harbor is helping to make it the most wonderful time of the year for its customers. Little Mia, a dog, was on hand to greet passengers in her holiday best, and the airport kept with its tradition of offering free gift wrap.

"Anybody can walk up, and we'll wrap their gifts for them. It doesn't matter what size," said Misty Cisneros-Contreras, Customer Service Manager for Phoenix Sky Harbor. "We have complimentary gift bags, if they'd like to take them with them as well. Gift tags and candy canes for the kids."

For the first time ever, there's a wrapping station in the baggage claim area of Terminal 4. 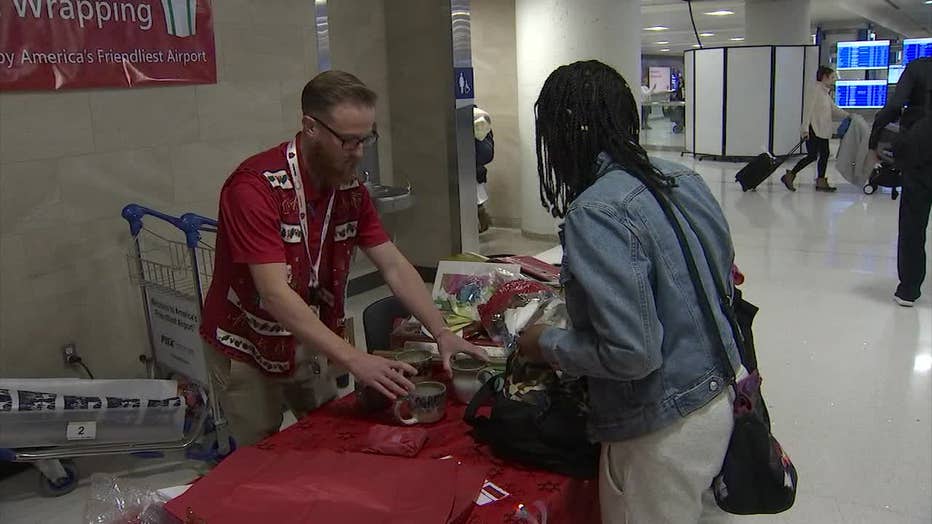 "We have some people that open up their luggage, and we wrap ten gifts for them," said Cisneros-Contreras. "Others just have a small gift card that they want wrapped up."

Sandy, who came in from Oakland to see her son, his wife and her grandson, had to get one last gift wrapped. She never thought the airport would be doing that for her.

"I just thought that was an excellent idea, and I said I have one more, why don't I get that one done while they're traveling here to pick me up," said Sandy.

Lily, who traveled from Miami to be with her sister and niece, did the same.

"I just had some gifts that I needed to wrap, and some of them broke on the way so they fixed it," said Lily.

All of the gift wrap is donated to the airport, and the volunteers plan on offering the free service for many years to come.