Franklin police were initially alerted by a vigilant employee at a Jared jewelry store located inside the Thoroughbred Village Shop Center in Franklin, Tennessee, just before 8 p.m. on Nov. 4. The caller saw a person wearing a hoodie, surgical mask, hat, and sunglasses, which they found odd since it was nighttime, according to a department news release.

Officers working undercover nearby located the unusually-dressed individual who got into a van. Police followed the van to the CoolSprings Galleria which was less than a mile away from the initial caller.

The van parked in the fire lane of the JCPenney at CoolSprings Galleria and four masked individuals hopped out of the van and ran into the store.

The driver of the van was quickly arrested as he waited outside for the others to return, police said.

Inside the mall, meanwhile, the four suspects began smashing glass with sledgehammers in an attempt to steal jewelry from the display cases.

During the incident, one of the individuals pepper-sprayed an employee while another tried to grab an officer's gun in the middle of an arrest.

Police chased the four suspects and body cam video shows the moments officers confronted at least one of the individuals while inside the mall.

In the video, one officer is seen hurriedly running into the JCPenney and chasing one of the masked suspects. Another officer is then seen tackling another suspect as he attempted to flee from the store.

"All of this unfolded while the store was open, with shocked customers and employees watching," the news release continued.

While police were able to corral one suspect and the driver at the JCPenney scene, the other three suspects fled on foot. Additional officers and K9 units joined in the chase. Officers were eventually able to nab another two suspects in a nearby parking lot, however, one eluded law enforcement. 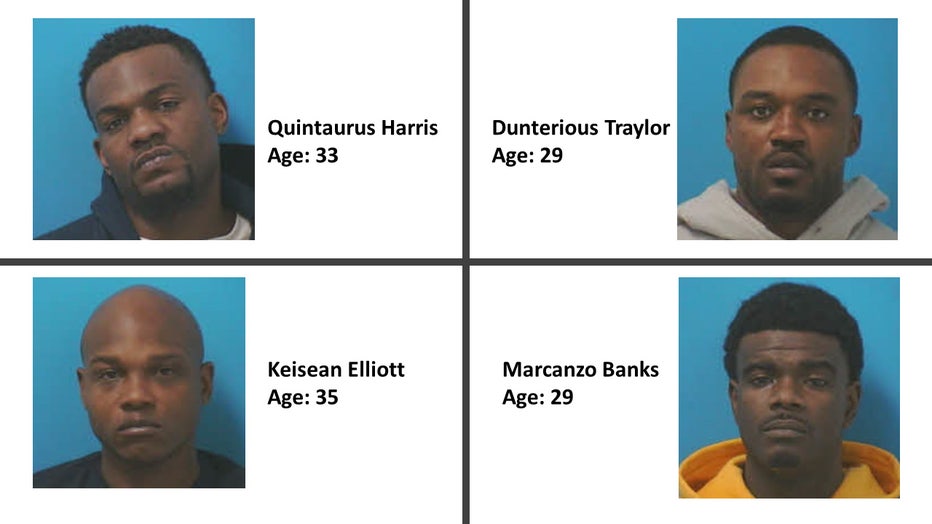 Investigators for "Operation Not In Our Mall" have identified an additional five robberies over the past several weeks in both Tennessee and Arkansas similar to this most recent incident. The loss of inventory amounted to about $1.5 million, police said.

Detectives are working with multiple agencies across state lines to determine if the most recent incident that took place in Franklin was executed by the same suspects as the other robbery locations.

So far, "Operation Not In Our Mall" has made more than 34 arrests since it began on Nov. 1 and has led to the recovery of more than $7,000 worth of stolen merchandise, not including this recent incident, police said.