In a series of tweets, Gordon, who served as mayor for Arizona's largest city from 2004 to 2012, said he is being treated by two doctors who he says are the two best doctors for this particular type of cancer.

"I intend to beat this and am so far, with your help," read one of Gordon's tweets.

Here's what you should know about Multiple Myeloma, 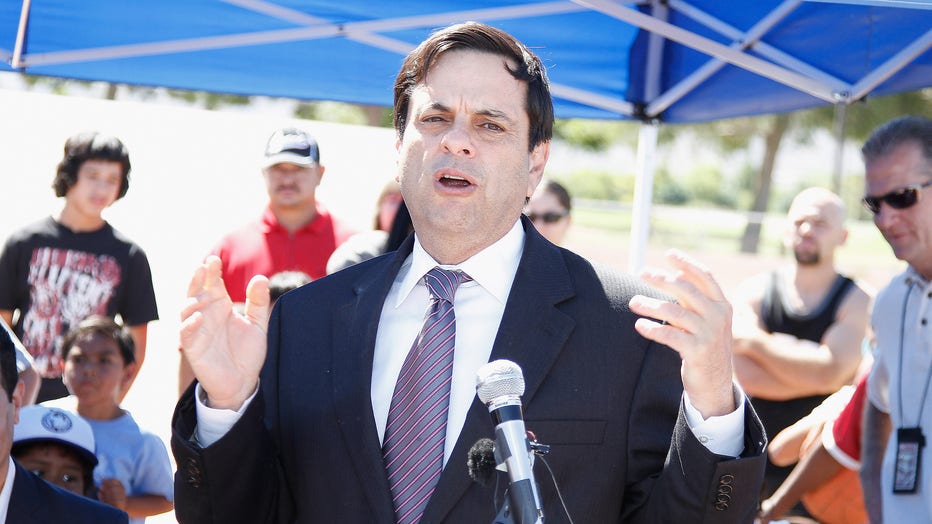 Phil Gordon, in a photo taken in 2011. At the time, he was the Mayor of the City of Phoenix. (Photo by Mike Moore/Getty Images)

What is Multiple Myeloma?

According to the Mayo Clinic, Multiple Myeloma is a type of cancer that forms in a type of white blood cell that is called a plasma cell.

"Healthy plasma cells help you fight infections by making antibodies that recognize and attack germs," read a portion of the website. "In Multiple Myeloma, cancerous plasma cells accumulate in the bone marrow and crowd out healthy blood cells."

The cancerous cells, according to the Mayo Clinic, would produce abnormal antibodies that the body can't use, and the antibodies would build up in the body, and cause problems like kidney damage.

"Cancer cells can also cause damage to the bones that increases the risk of broken bones," read a portion of the website.

How many people are diagnosed with it each year?

According to the American Cancer Society, it is estimated that about 34,470 new cases will be diagnosed in the U.S. for the year 2022, with 19,100 of those involving men.

Overall, officials with the ACS say the lifetime risk of getting Multiple Myeloma is 1 in 132 (0.76%)

The Mayo Clinic says it is not clear what causes Multiple Myeloma, but they did list a number of risk factors, such as:

What are the symptoms?

Mayo Clinic officials say signs and symptoms of Multiple Myeloma can vary, and during the early courses of the disease, there may be no symptoms.

However, Mayo Clinic officials say signs and symptoms, when they do occur, can include the following:

According to ACS, the five-year relative survival rate for Multiple Myeloma is 55%.

However, officials say a number of factors can affect a person's disease outlook, such as age, overall health, kidney function, the tumor's chromosome changes, and the levels of certain proteins and other substances in the blood.

How do doctors treat Multiple Myelomas?

According to ACS, there are a number of treatments for Multiple Myelomas.

People who have been diagnosed with the disease should speak with their cancer care doctor for more on what can be done.

According to the United Kingdom's National Health Service, myelomas usually cannot be cured.

Can people die from the disease?

Many cancers come with a risk of death from the disease, and Multiple Myeloma is no different.

Are there other well-known people who were diagnosed with Multiple Myeloma?

News of former U.S. Secretary of State Colin Powell's death from COVID-19 sparked some debate about how effective vaccines are. It was revealed that Powell was fully vaccinated, and suffered from a cancer that impacts a person's immune system. FOX 10's Linda Williams has more on what some in the medical field are saying.

A well-known person who is living with Multiple Myeloma is former NBC News anchor Tom Brokaw.

According to the Associated Press, Brokaw was diagnosed with Multiple Myeloma in 2013.

Former General and Secretary of State Colin Powell, who died in 2021, was also diagnosed with Multiple Myeloma. Powell died from COVID-19 complications.