Whenever a snowstorm is in the forecast, there’s usually another occurrence: empty bread, milk and egg shelves at the grocery store.

The need to stock up on such perishables has become so evident over the years that various forms of a "French Toast Alert System" have even popped up — a tongue-in-cheek way to indicate how severe the winter weather looks in the form of the popular breakfast dish.

But why are these items, in particular, of high demand when severe weather is predicted? Dr. Kimberley Shoaf, a professor of public health at the University of Utah, said these products are the basis of our diet and how we cook in the United States. Shoaf also noted the psychology of stockpiling.

"When you think about sending somebody to the store, the first thing in your mind is, ‘do we have milk, bread and eggs?’" Shoaf told FOX Weather.

Comedian Vic DiBitetto shared a viral video in 2013, poking fun at this apparent winter-weather trend. "Gotta’ get the bread and milk," DiBitetto jokingly screams in the video.

DiBitetto recently told FOX Weather that he believes the video became such a success because people could relate.

All jokes aside, bread, milk and eggs tend to sell out faster because grocery stores only have so much available — as compared to canned goods or other nonperishable, packaged foods.

"So if everybody goes out on Friday instead of Monday through Saturday to buy those things, those shelves are going to empty, and they don’t get their next round of supplies until the next week," Shoaf explained.

The professor added that there is also some self-fulfilling prophecy in that shoppers see the shelves are empty and think, "I should have gone earlier. I should have been the first one to get it." Furthermore, she noted the psychology around stockpiling.

"It’s sort of a mob mentality," Shoaf said. "If the mob is running and getting toilet paper, running and buying bread and milk, it might be more of a fear of missing out. 'But what if I really do need that, and I don’t have it?'" 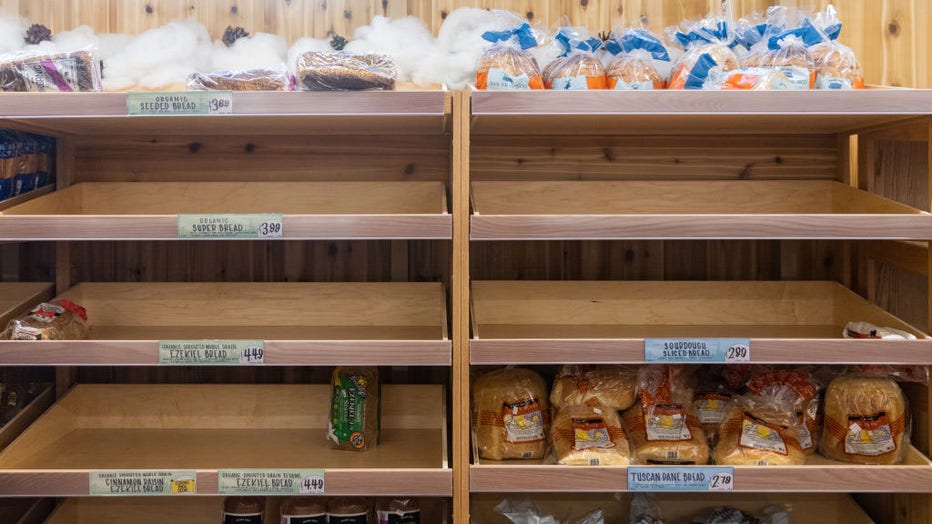 But in reality, Shoaf said it makes little sense to fill the refrigerator with perishable items if there’s a potential to lose power. Experts say people should keep two weeks' worth of shelf-stable things like canned and dry foods, in general.

"Think about what you eat for two weeks and think about how you can make those meals without using any perishable foods," Shoaf said.

How to prepare for the next winter storm

Winter weather can bring bitter temperatures, power failures, loss of communication services and icy roads. To keep families safe, the U.S. Centers for Disease Control and Prevention (CDC) has guidance on how to prepare the home and car before a snowstorm.

According to the CDC, it’s important to check weather forecasts regularly and check emergency supplies, including food and water supply, ahead of an anticipated winter storm or extreme cold.

The American Red Cross encourages having two emergency preparedness kits: one to keep at home to sustain the family for two weeks, as well as a smaller, more easily transportable kit with a three-day stock of supplies that can be stored in the vehicle or in an easily-accessible location for evacuations.

"In regards to water, we suggest one gallon per person, per day. For food, we suggest non-perishable, easy-to-prepare items that don’t require access to electricity to open or consume," Stephanie Fox with the American Red Cross National Headquarters told FOX Weather.

When packing the kits, Fox said it’s also important to consider all members of the family. This includes those who may have special dietary needs, food allergies and even pets.

Additionally, the CDC and National Weather Service recommend preparing the home ahead of snowstorms — and this includes checking in on the four p’s: pets, pipes, plants and people.

Winterizing the car is important too, which means having maintenance service on the vehicle as often as the manufacturer recommends. Prior to the winter season, the CDC says the vehicle’s radiator system should be serviced, or check the antifreeze level with an antifreeze tester.

Also, replace the windshield-wiper fluid with a wintertime mixture, check the heater, defroster, brakes, brake fluid, ignition, emergency flashers, exhaust, oil and battery to make sure the car is in good working order.

This story was reported from Cincinnati. FOX Weather contributed.