An Arizona non-profit group is helping to prevent wild horses from being removed from their natural habitat by using birth control darts.

MARICOPA COUNTY, Ariz. - An Arizona group is using darts to inject birth control into wild horses on the Salt River.

The Salt River Wild Horse Management Group helps prevent wild horses from having to be removed from their natural habitat.

"Coming here is just the way to get away from it all. You drive 20 minutes from Phoenix, this big metropolis, and you come here, to a whole different world. The sounds, the sights.. just watching the wildlife and the wild horses is an amazing thing and we're just lucky that we still have that here, said Simone Netherlands, President of the Salt River Wild Horse Management Group.

"Reminds you of the old west"

Chris Marks, a wildlife photographer, described the scene as "It's kind of interesting because it's like you're stepping back in time.. a thing in nature. Just seeing something that's actually free to roam is pretty few and far between as most lands are so overly controlled these days. And I also enjoy the challenge of trying to capture it all. It's just completely astonishing and it kind of reminds you of the old west." 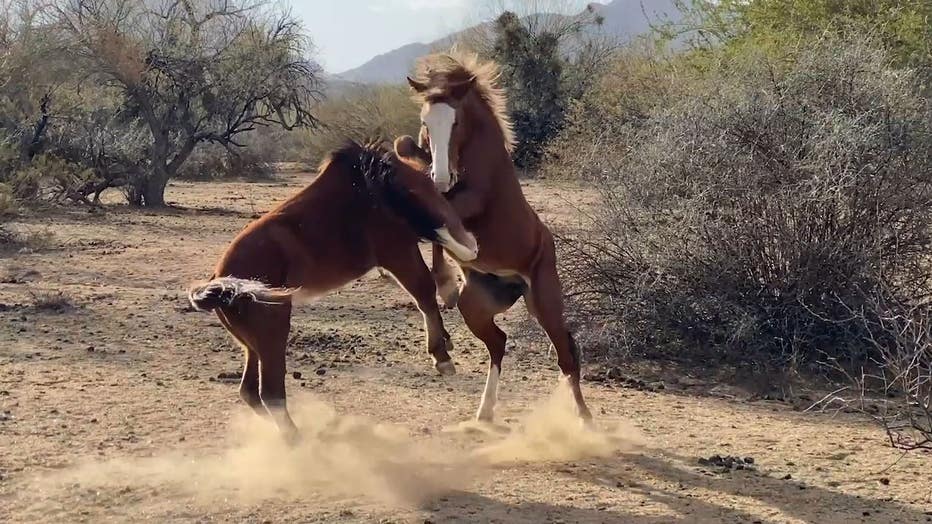 Netherlands added, "We have millions of people coming just to see the Salt River wild horses. They've become a little bit famous and it's just amazing when you see these animals in their natural habitat. You watch their beautiful herd dynamics." 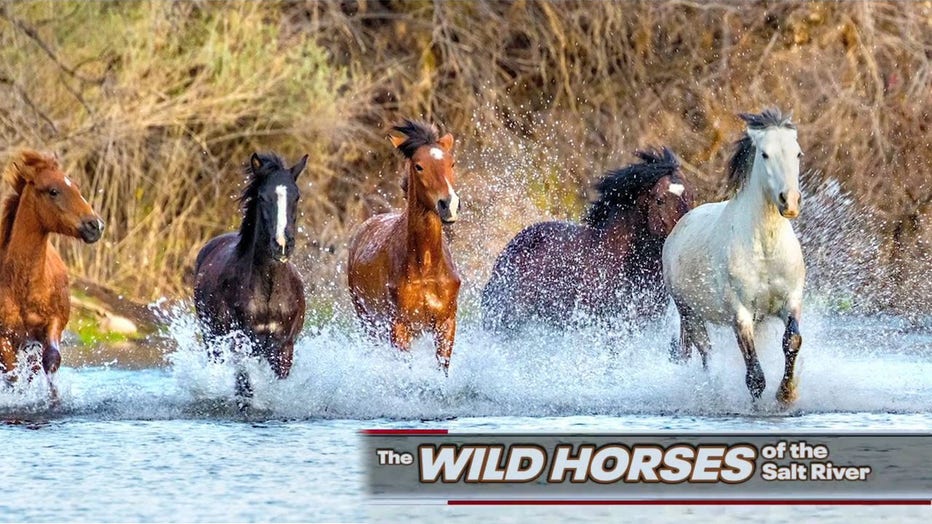 "I find it very healing. The world is in so much chaos and just being here.. it's so tranquil."

— Cheryl Mano, a supporter of the wild horses

"Back when this herd was in danger of removal, we made this proposal and we said, look, if we can humanely reduce this herd population, then can they stay? We asked, for a number of years, to prove we could do that.

"We're trying to prove that it's possible to give wild horses birth control and what we do is we give them PZP, which stands for porcine zona pellucida.. when a mare is darted with that, she will not give birth for one year. She won't conceive for one year. So she does need that shot again every year. It's not that big of a deal for the mare. She's usually gonna take a hop, skip and a jump and goes right back to what she was doing. 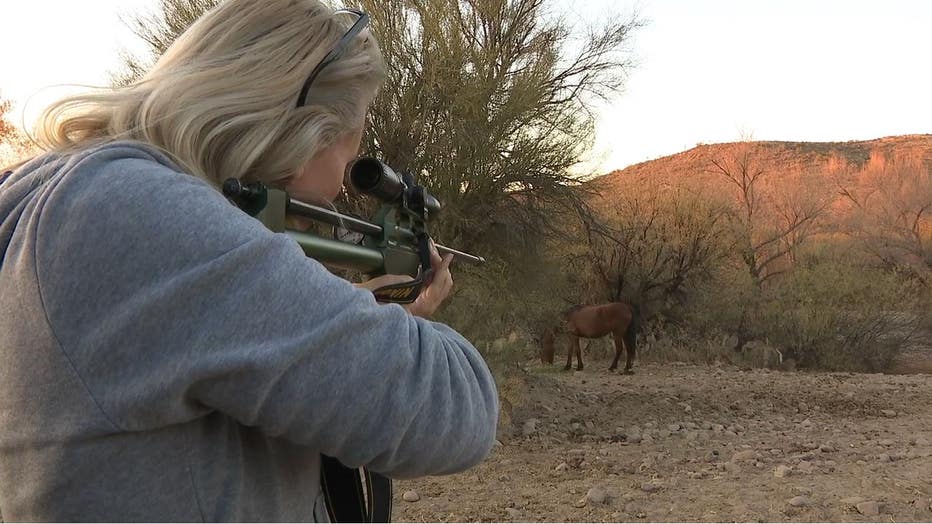 "What this does, is kind of stabilize the population growth and that means that the birth rate will probably equal the natural death rate. So slowly, over a number of years, you can reduce the population that way.. in a humane way and prevent removals of any kind. That's our main goal — to keep the Salt River wild horses right here on the Salt River where they belong," explained Netherlands. 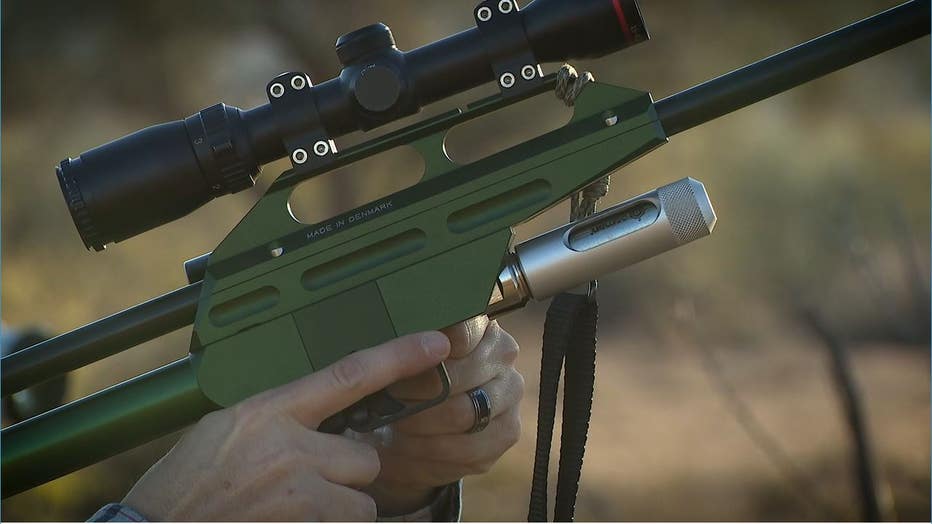 "The Salt River Wild Horse Management Group is a non-profit. We don't get any grants or funds from the government. These horses are purely supported just by the public who loves them. Managing wild horses is multi-dimensional, so we have several different programs. For example, we have a feed program, which is highly necessary right now with this drought. To get them through this difficult time," said Netherlands. 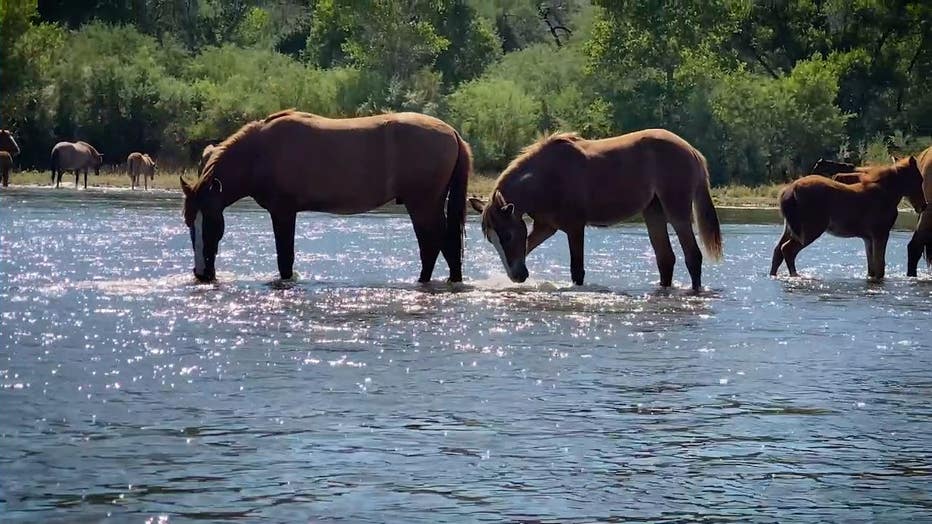 "Normally, it's about 10 to 15 minutes to feed 160 horses. And most of them are settled down within five minutes. And then we put a little extra out for those coming in later," said Rick Blandford, SRWHMG's Feed Manager.

"Right now, divided over four feed stations, we're spending between $11,000 and $12,000 a month to keep the horses healthy and we have to keep that up until we have rain, until we have forage again. Because last year by this time, the forest was beautiful and green. We really hope that the public continues to support us because it's tough to make ends meet to feed all of the Salt River wild horses. 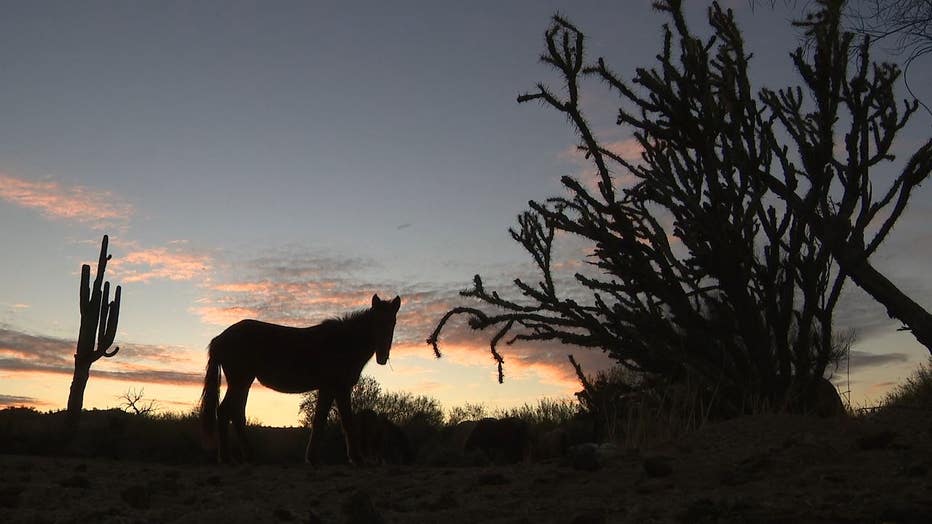 "It is because of government agreements and a great partnership we have with the Arizona Department of Agriculture that these horses are still here. Aren't we lucky that we still get to see this in Arizona? All of the public can know that they'll be preserved for future generations of Arizonans to see," said Netherlands.

Since the group is not funded by the government, they rely on public funding. For more information, head to their website: http://srwhmg.org.