Chandler police lieutenant Scott Veach helped save a woman dangling 25 feet off of a cliff in Utah.

ST. GEORGE, Utah - A woman hanging off of a 70 foot cliff in St. George, Utah found herself in quite the bind -- dangling as she yelled for help.

"She was probably really close to being in shock at that point," said Chandler Police Lt. Scott Veach. He was nearby and saw the woman. He also heard her.

"I walked over where the rope was tied off, and there was a girl up there doing something.. I am not really sure," he said.

In the video, Lt. Veach is seen helping the woman.

"I asked them if they needed help. She said, 'Yeah, I do.' She said her hair was caught in the rope and '..I have no idea what I am doing.'"

She was dangling 25 feet down below.

Veach's son plays football at Dixie State University in St. George. They were holding a team meeting at Dixie Rock when they jumped in to help, too.

"I had the idea, we got all this muscle behind us. We have about 100 football players and thought, why don't we just pull her up or let her down," said Veach. "We just kind of directed them and they pulled her up to the ledge and another guy came up and helped me and we pulled her up on the ledge."

It was almost like a divine moment because they had people there to help.

"Yeah, I definitely couldn't have gotten her up by myself because when I first got to her, I grabbed her hand, and when they are pulling, it literally pulls her against the rock, so I was telling her to use her hands and feet, and she told me her legs were numb and she couldn't use them," said Veach. 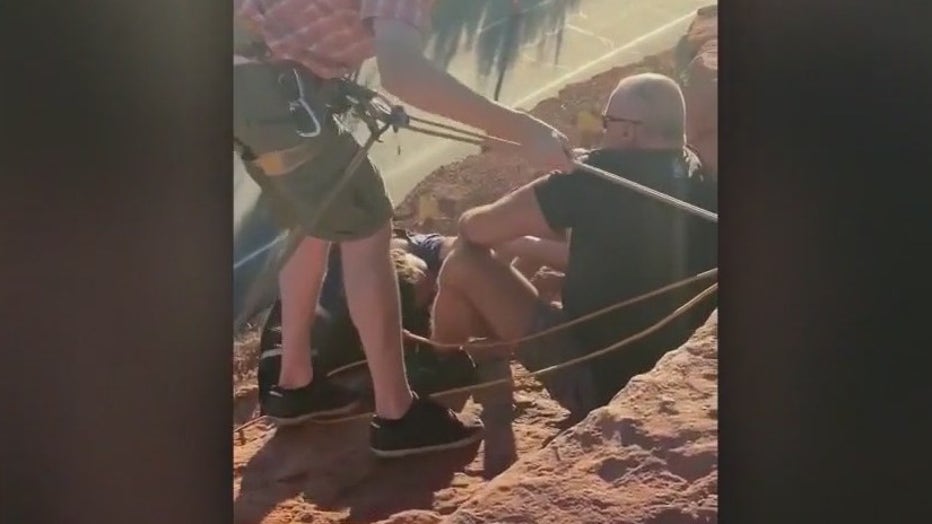 Veach is an Arizona State University alumni and has 25 years as a police officer. He was in St. George visiting his son and although he is trained to be ready for situations like this one, he was impressed at how quick the football team jumped in to help.

"I had nothing to do with getting her up. I was just coordinating it and directing it," he said. "Several people came up to me and said 'we were really worried about you falling off.' It never even crossed my mind. I was focused on getting her up because I could tell she was in trouble."