PHOENIX - A day after a plane carrying two people crash-landed a mile short of Deer Valley Airport, people who worked at an auto store near the crash spoke about their terrifying ordeal.

The scene of the crash landing is beneath the flight path into and out of Deer Valley Airport, with a couple hundred planes overhead on any given day. Many of the planes are connected to flight schools.

It is known that the Piper PA-34 involved in the incident was on final approach to Deer Valley Airport when the pilot declared mayday around 8:20 a.m., eventually crash-landing about a mile shy of the runway.

It was an average morning in Andersen Auto until the two-man crew heard a curious noise coming right at them.

"Heard sputtering from the plane and loud crash, clipped the cars," said Dean Harper. "If he didn't turn, he would have hit the building for sure."

Harper rushed around the building to see the scene, which he captured on his cell phone.

"They were getting out," said Harper. "There was [aviation] gas everywhere and debris."

The landing was something of a miracle, as the pilot had to fly over that building, and then dodge the overhead wires.

The pilot also had a full row of cars to contend with. In the end, at least six cars were damaged, and three were destroyed.

Authorities say the pilot and one passenger walked away without any major injuries, so did the crews at Anderson Auto, who often joke about a plane landing on their heads.

On Wednesday, one almost did.

"We talked about it a lot yesterday for sure," said Harper.

The pilot on board the plane is a 48-year-old flight instructor, and the passenger is a 42-year-old. Their names, as well as an exact cause for the incident, have not been released.

People who work around the area say there have been around five crashes in the past year or so. 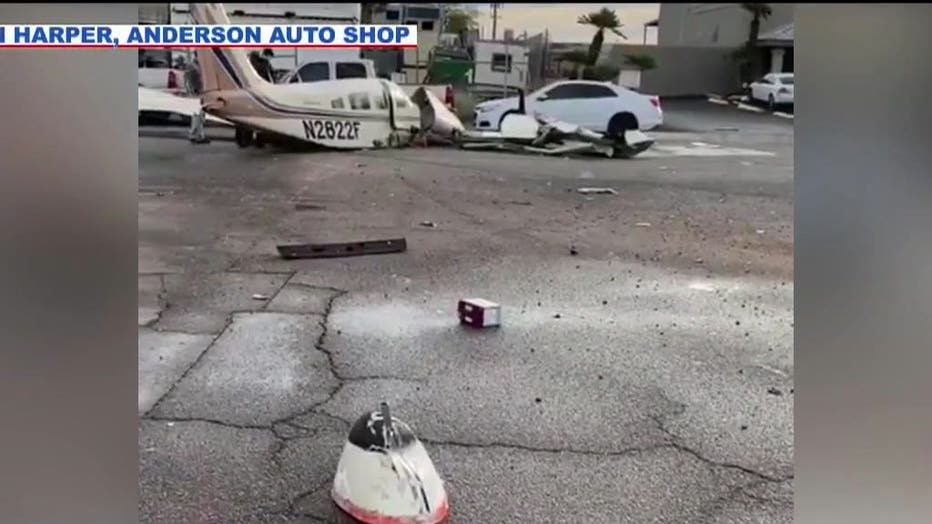