RED LODGE, Mont. - The forces of fire and ice shaped Yellowstone National Park over thousands of years. It took decades longer for humans to tame it enough for tourists to visit, often from the comfort of their cars.

In just days, heavy rain and rapid snowmelt caused a dramatic flood that may forever alter the human footprint on the park's terrain and the communities that have grown around it.

The historic floodwaters that raged through Yellowstone this week, tearing out bridges and pouring into nearby homes, pushed a popular fishing river off course — possibly permanently — and may force roadways nearly torn away by torrents of water to be rebuilt in new places.

"The landscape literally and figuratively has changed dramatically in the last 36 hours," said Bill Berg, a commissioner in nearby Park County. "A little bit ironic that this spectacular landscape was created by violent geologic and hydrologic events, and it’s just not very handy when it happens while we’re all here settled on it." 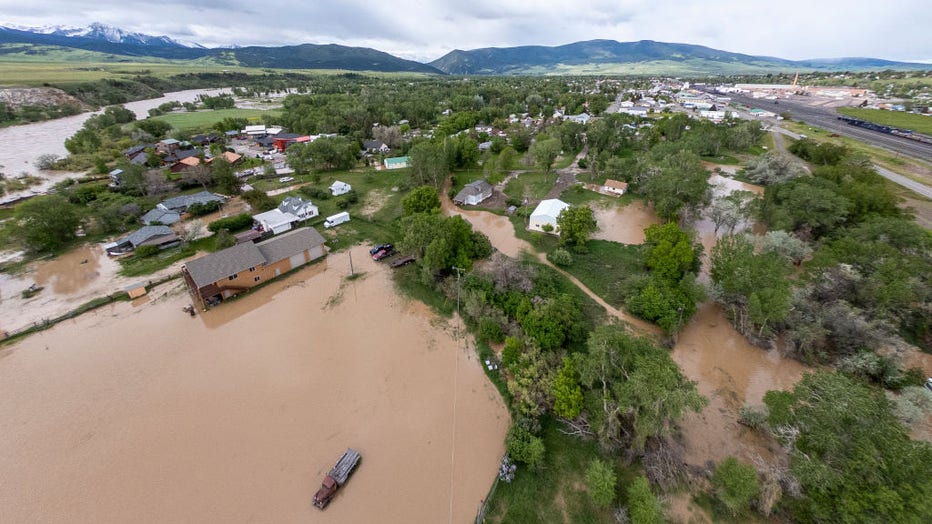 In this aerial view, flooding is seen on June 14, 2022 in Livingston, Montana. The Yellowstone River hit has a historic high flow from rain and snow melt from the mountains in and around Yellowstone National Park. (William Campbell/Getty Images)

The unprecedented flooding drove more than 10,000 visitors out of the nation’s oldest national park and damaged hundreds of homes in nearby communities, though remarkably no was reported hurt or killed. The only visitors left in the massive park straddling three states were a dozen campers still making their way out of the backcountry.

The park could remain closed as long as a week, and northern entrances may not reopen this summer, Superintendent Cam Sholly said.

"I’ve heard this is a 1,000-year event, whatever that means these days. They seem to be happening more and more frequently," he said.

Sholly noted some weather forecasts include the possibility of additional flooding this weekend.

Days of rain and rapid snowmelt wrought havoc across parts of southern Montana and northern Wyoming, where it washed away cabins, swamped small towns and knocked out power. It hit the park as a summer tourist season that draws millions of visitors was ramping up during its 150th anniversary year.

Businesses in hard-hit Gardiner had just started really recovering from the tourism contraction brought by the coronavirus pandemic, and were hoping for a good year, Berg said.

"It’s a Yellowstone town, and it lives and dies by tourism, and this is going to be a pretty big hit," he said. "They’re looking to try to figure out how to hold things together."

RELATED: Yellowstone closed after historic floods; some areas cut off

Some of the worst damage happened in the northern part of the park and Yellowstone’s gateway communities in southern Montana. National Park Service photos of northern Yellowstone showed a mudslide, washed out bridges and roads undercut by churning floodwaters of the Gardner and Lamar rivers.

In Red Lodge, a town of 2,100 that’s a popular jumping-off point for a scenic route into the Yellowstone high country, a creek running through town jumped its banks and swamped the main thoroughfare, leaving trout swimming in the street a day later under sunny skies.

Residents described a harrowing scene where the water went from a trickle to a torrent over just a few hours.
The water toppled telephone poles, knocked over fences and carved deep fissures in the ground through a neighborhood of hundreds of houses. Electricity was restored by Tuesday, but there was still no running water in the affected neighborhood.

Heidi Hoffman left early Monday to buy a sump pump in Billings, but by the time she returned her basement was full of water.

"We lost all our belongings in the basement," Hoffman said as the pump removed a steady stream of water into her muddy backyard. "Yearbooks, pictures, clothes, furniture. Were going to be cleaning up for a long time."

At least 200 homes were flooded in Red Lodge and the town of Fromberg.

The flooding came as the Midwest and East Coast sizzle from a heat wave and other parts of the West burn from an early wildfire season amid a persistent drought that has increased the frequency and intensity of fires. Smoke from a fire in the mountains of Flagstaff, Arizona, could be seen in Colorado.

While the flooding hasn't been directly attributed to climate change, Rick Thoman, a climate specialist at the University of Alaska Fairbanks, said a warming environment makes extreme weather events more likely than they would have been "without the warming that human activity has caused."

"Will Yellowstone have a repeat of this in five or even 50 years? Maybe not, but somewhere will have something equivalent or even more extreme," he said.

Heavy rain on top of melting mountain snow pushed the Yellowstone, Stillwater and Clarks Fork rivers to record levels Monday and triggered rock and mudslides, according to the National Weather Service. The Yellowstone River at Corwin Springs topped a record set in 1918.

Yellowstone's northern roads may remain impassable for a substantial length of time. The flooding affected the rest of the park, too, with park officials warning of yet higher flooding and potential problems with water supplies and wastewater systems at developed areas.

The rains hit just as area hotels filled up in recent weeks with summer tourists. More than 4 million visitors were tallied by the park last year. The wave of tourists doesn’t abate until fall, and June is typically one of Yellowstone’s busiest months.
Mark Taylor, owner and chief pilot of Rocky Mountain Rotors, said his company had airlifted about 40 paying customers over the past two days from Gardiner, including two women who were "very pregnant."

Taylor spoke as he ferried a family of four adults from Texas, who wanted to do some more sightseeing before heading home.

At a cabin in Gardiner, Parker Manning of Terre Haute, Indiana, got an up-close view of the roiling Yellowstone River floodwaters just outside his door. Entire trees and even a lone kayaker streamed by.

In early evening, he shot video as the waters ate away at the opposite bank where a large brown house that had been home to park employees before they were evacuated was precariously perched.

In a large cracking sound heard over the river's roar, the house tipped into the waters and was pulled into the current. Sholly said it floated 5 miles (8 kilometers) before sinking.

The towns of Cooke City and Silvergate, just east of the park, were also isolated by floodwaters, which also made drinking water unsafe. People left a hospital and low-lying areas in Livingston.

In south-central Montana, 68 people at a campground were rescued by raft after flooding on the Stillwater River. Some roads in the area were closed and residents were evacuated.

In the hamlet of Nye, at least four cabins washed into the Stillwater River, said Shelley Blazina, including one she owned.
"It was my sanctuary," she said Tuesday. "Yesterday I was in shock. Today I’m just in intense sadness."