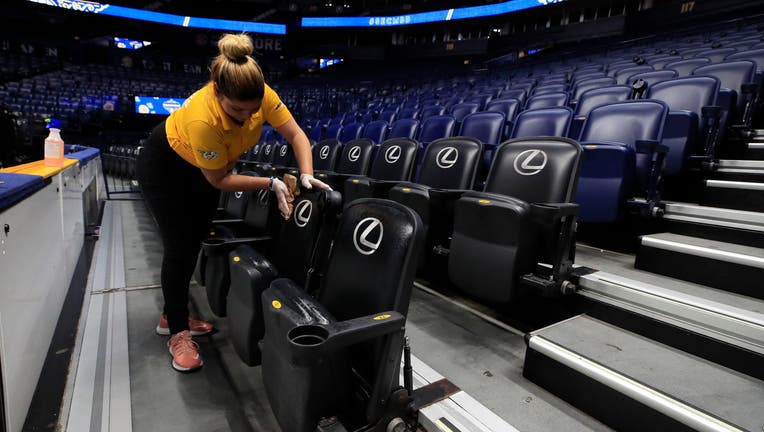 A worker cleans the seats after the announcement of the cancellation of the SEC Basketball Tournament at Bridgestone Arena on March 12, 2020 in Nashville, Tennessee. (Photo by Andy Lyons/Getty Images)

BERKELEY, Calif. - The college basketball season officially starts Wednesday and the coronavirus is securing a shaky start for some Bay Area men’s teams.

On Tuesday, Stanford’s opener against Utah Valley was called off due to a positive coronavirus test and Cal scrambled to lock in a game with Oregon State after virus cases scrapped their original matchup. And due to teams dropping out of the Crossover Classic because of COVID-19, Saint Mary's is now flying to South Dakota to play in a six-day tournament over Thanksgiving.

“It's been a wild ride,” said Lea Miller-Tooley, the tournament director. “We've learned a lot, but we've really been able to hang in there.”

The basketball hiccups follow a myriad of NCAA football games either being canceled or postponed over the last two weeks with a combined 35 games nixed between weeks 11 and 12. Eight are already canceled for this week. Plus, health officials around the nation are urging people to avoid traveling and gathering as virus numbers swell heading into the holidays.

But according to Sanford Health, who teamed with Crossover Classic tournament officials to address challenges, new measures have been put in place and teams participating in the tournament will be as safe as possible. Testing is the core of their defense, officials said. It's how they establish a “controlled environment."

“It’s been great here,” West Virgina Coach Bob Huggins said from the tournament, per Sanford Health. “I mean, it’s exactly what we were told it was going to be. We’re in a bubble — it’s just our guys. Our guys were tested, and as expected, they’ve done a great job of taking care of themselves. The facilities here are unbelievable."

In order to play the tournament, Saint Mary's team members and the other 11 teams must have a negative test within two days of traveling to Sioux Falls. They will be tested immediately upon arriving, plus additional tests on Wednesday and Friday. No fans will be in attendance and teams will stay in a controlled environment throughout their stay.

For Cal, who hasn’t played since beating Stanford in the first round of the 2020 Pac-12 tournament, they head to Oregon for two games in a multi-team event. They’ll first face Oregon State for what will be a non-conference game on Wednesday and then play Northwest the following day. They were originally scheduled to face Colorado State at the same event in Corvallis.

“In a year when disruption is likely the norm, we had to adjust with our own COVID-19 shutdown earlier this month, and now with Colorado State's situation," Cal head coach Mark Fox said in a statement. "It was not possible to replace Colorado State on such short notice and playing Oregon State proved to be the best solution because it's most important that we play when we can safely do so."

Cal added they will be following protocols and best practices established by the NCAA and the Pac-12 Medical Advisory Committee that are in line with federal, state and local public health guidelines. The Bears’ home opener against Nicholls State is still scheduled for Nov. 30 and Pac-12 games begin for the Bears Dec. 3 against Arizona State.

Saint Mary’s takes the court for the first time in eight months when they open the Crossover Classic against Memphis. They’re scheduled to play Nicholls State in Moraga on Dec. 1  and conference play for the Gaels is slated for Jan. 2 against Pepperdine.

And for Stanford, they’re scheduled to play Alabama on Nov. 30 in North Carolina for the Maui Invitational. Their home opener is scheduled for Dec. 7 against Cal Poly and they’ll begin Pac-12 play on New Year’s Eve in Corvallis against Oregon State.

Keep up with the news by downloading KTVU's news app and subscribing to our newsletter.

This story was reported from Oakland.