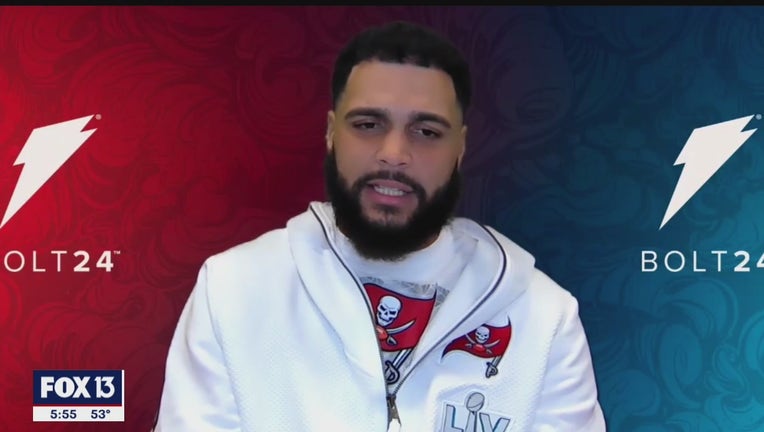 "When I was a kid, I grew up not liking Tom Brady," Evans told a group of reporters. He explained the reason: "I was a Peyton Manning fan. Now I'm the biggest Tom Brady fan."

My, how things change when you share the huddle with the guy many believe to be the best ever to play the quarterback position. Evans also has won over Brady as a fan and a willing listener.

How does Mike Evans communicate that he's open?

"Tom, third-down, look to me," Evans replied. "Or Tom, they're playing a lot of man [to man coverage] right now, look for me. And he knows that. He's a real cool guy to talk to. If you want something from him you just got to ask."

MORE: Bucs double up female coaches in Super Bowl with not 1 but 2

Meet the women who make Bucs most diverse in NFL

With two women on the coaching staff, the Buccaneers are the most inclusive in the league.

Mike Evans became the first NFL receiver ever to record seven consecutive 1,000-yard seasons to begin his career. The only one ever.

During year number seven -- this year -- he battled multiple injuries to stay on the field. One play after he caught the pass that put him over the 1,000-yard mark, he suffered a gruesome-looking knee injury that appeared would sideline him indefinitely.

Less than 48 hours later, he shows up on the practice field with his helmet in-hand, ready to go. That weekend he starred in the Bucs' playoff win at Washington.

Even Brady has lessons to learn from QB coach Christensen

Tampa Bay Buccaneers Quarterbacks Coach Clyde Christensen is so gracious in his leadership, he should be known as Clyde the Guide.

"A lot of prayers and a lot of hard work," Evans said. "Good training staff. I was able to play through all those injuries. I hate being out. If I can't play, then I'd know I couldn't play. I'd sit."

Evans is a stand-up guy off the field, too. His Mike Evans Family Foundation work has led to a nomination for the Walter Payton NFL Man of the Year award.

"We're given so much," Evans says, "We're so blessed. We just want to help people while we're in this position."

After playing seven years in the NFL, Mike Evans is still just 27 years old, so he'll likely be in this position for years to come.