PHOENIX - Arizona Attorney General Mark Brnovich is calling for Vice President Kamala Harris to be replaced in her role spearheading the administration’s diplomatic efforts to end the crisis at the southern border -- a day after Customs and Border Protection (CBP) announced that the number of migrant encounters had again risen.

"Like many Americans, I was encouraged by your March 24th appointment of Vice President Kamala Harris to lead the efforts to stem the tidal wave of illegal migration into our country," Brnovich said in a letter to President Biden. "However, to date, her response to the border crisis has been absolutely abysmal, so I am requesting that she be replaced as your ‘border czar.’"

CBP announced Tuesday that it encountered 178,622 migrants in April trying to enter the U.S., a 3% increase over the 172,000 encountered in March, which had been the highest number in 20 years. The agency said that the number of unaccompanied children from Northern Triangle countries dropped by 12%, with 13,962 in April compared with 15,918 in March.

"CBP continues to see a large influx of illegal migration along the Southwest Border," acting CBP Commissioner Troy Miller said in a statement. 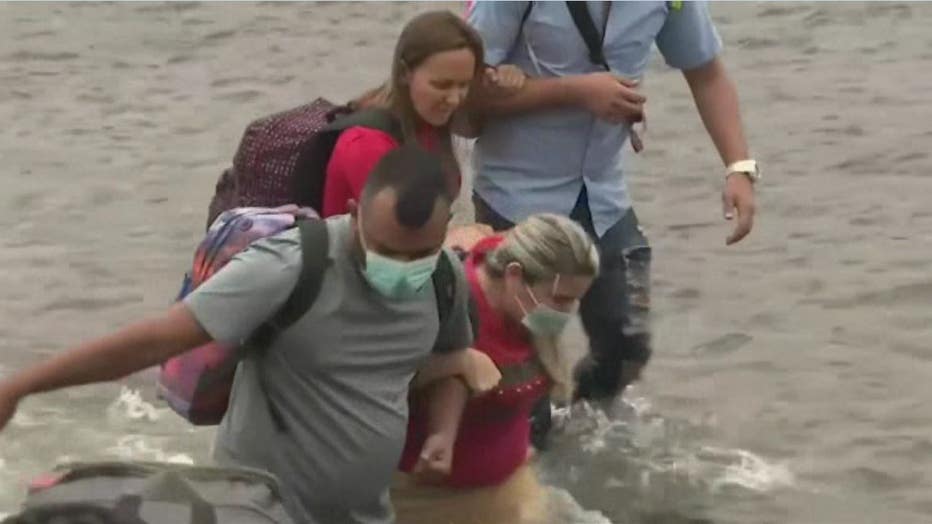 Groups of migrants continue to cross the Rio Grande in broad daylight, including many who say they're from Venezuela. They're guided over by smugglers, and then present themselves to local law enforcement.

Biden appointed Harris in March to lead the administration’s diplomatic efforts to solve the continuing crisis at the southern border. However, she has come under fire for not having visited the border or having held a press conference since taking up the role.

The White House has rejected that Harris is a border "czar," saying she isn’t in charge of the border per se, but in charge of the diplomatic efforts with Mexico and the Northern Triangle. However, Trump-era officials have rejected those arguments, saying that to lead those efforts, she must know what is happening at the border.

So far, Harris has so far only held "virtual meetings" with the leaders of Guatemala and Mexico. She is due to visit both countries, but not until next month.

Brnovich accused Harris of having shown "little interest" in seeing what is happening at the border and of not having articulated a plan to deal with the issue, instead traveling to other states.

"Mr. President, this is a slap in the face to Arizonans who helped elect you both to the highest offices in the land," Brnovich wrote.

Harris and the Biden administration have emphasized the "root causes" of the crisis, like poverty, climate and violence in Central America.

"We want to help people find hope at home," Harris said earlier this month. "So we are focused on addressing both the acute factors and the root causes of migration."

But Brnovich, who previously invited Harris to the border, says that the new April numbers show that "things are getting worse and we do not yet know the full extent of dangerous people and drugs crossing into our communities."

"I conclude by respectfully requesting that Vice President Harris be replaced as America’s "border czar" with a federal official who is willing to see the crisis firsthand and to work with state partners to address it," Brnovich wrote, also requesting new policies to increase transparency with Congress and the media.

Arizona is also one of a number of states that has sued the Biden administration over its immigration policies. Brnovich’s office recently sought a preliminary injunction against DHS guidance which narrows the categories of immigrants targeted for arrest and deportation.